Monday 26th May 2003 saw a sea of gold and black travel down the M5 to Cardiff ahead of one of the most memorable Wolves games in the past 30 years.

It had been 19 years since a Wolves side had played in the top-flight of English football, and on that day, the club was as close as it could get to reaching those heady heights once again as tens of thousands of supporters headed to the Millennium Stadium.

After the depths Wolves had dropped to in the mid-1980s, and the play-off heartaches of 1995, 1997 and just one year earlier in 2002, you’d be forgiven for not having much belief that a team which had spent a decade-and-a-half in the second tier would actually achieve their goal.

The previous season saw Wolves throw away a healthy advantage over third-placed West Bromwich Albion to miss out in the play-offs, but in 2002/03, Wolves were the side who had the momentum coming into post-season competition, having ending the campaign on a run of nine games without defeat, sneaking into the play-offs in fifth position. 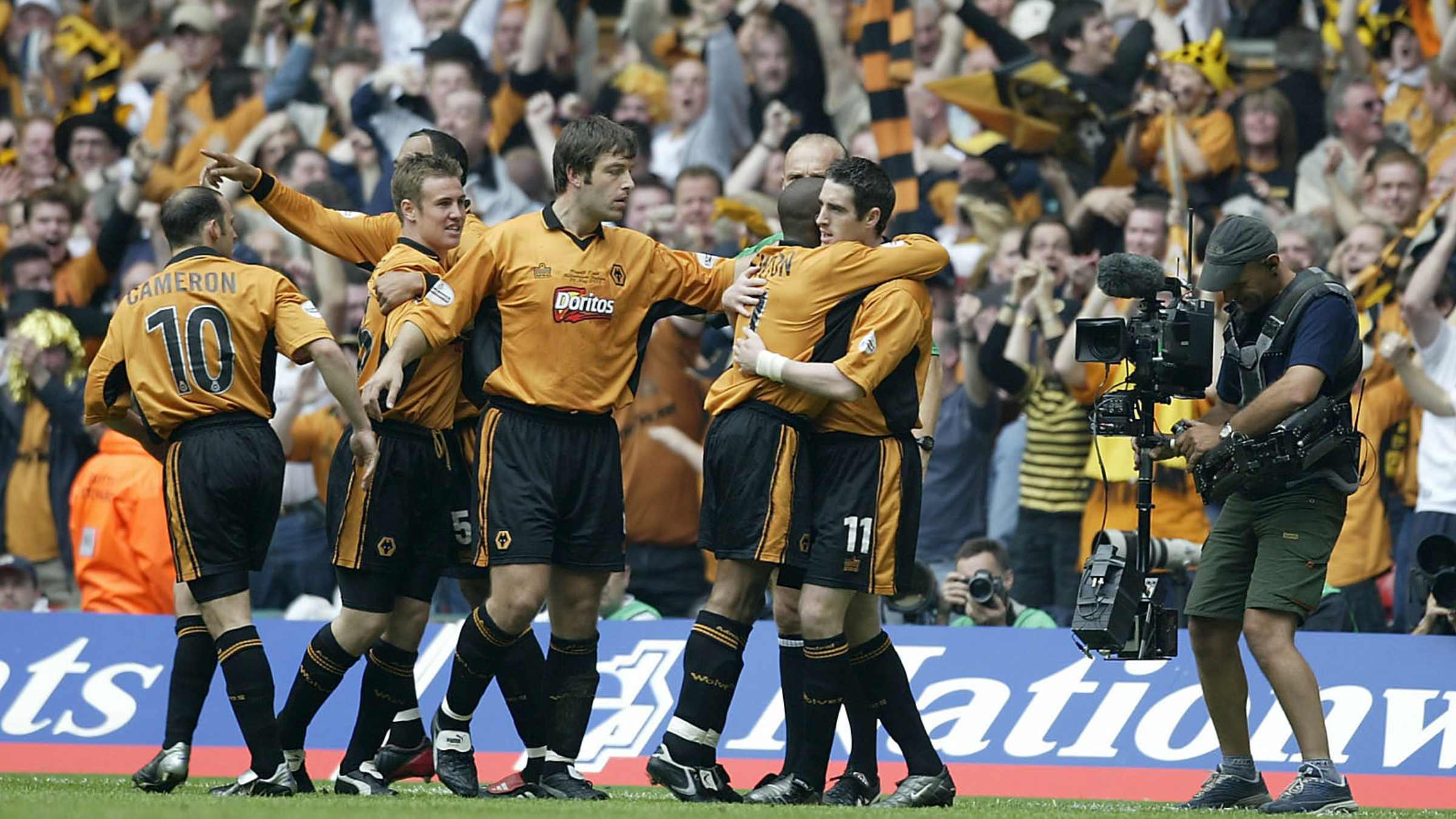 ROAD TO THE PLAY-OFF FINAL

The goals were free-flowing, with Dave Jones’ men scoring the third most throughout the campaign, and in that run of nine matches they had put 19 past the opposition, while conceding just six, with three of those coming in a 3-3 draw with the Blades.

A fifth-place finish in the league set up a semi-final with Reading. The first leg was at Molineux, and under the home pressure, Wolves began to buckle.

A first-half goal from Nicky Forster had put Reading in front and that was how the game remained until there were 75 minutes on the clock. “Here we go again” might have been the overwhelming feeling of those in the stands, but up steps Shaun Newton and Lee Naylor.

Firstly, Newton launched a fierce shot which flew past future gold and black keeper Marcus Hahnemann and then on 84 minutes Naylor’s low and driven free-kick caught the Royals out to ensure Wolves had a slender advantage to take into the second leg at the Madejski.

Player of the season Matt Murray had to be at his best this game. The keeper pulled off several stunning saves to stop Reading in their tracks, and then jubilation. Alex Rae found himself in space in the box before hitting a shot on the turn eight minutes from time to put Wolves one step closer to the promised land.

Having one of their most successful seasons ever, Sheffield United reached the semi-finals of both the FA and League Cups before falling at the penultimate stage by Arsenal (remember that David Seaman wonder save!) and Liverpool respectively.

Translating that form into their league campaign, United missed out on automatic promotion, but comfortably qualified for the play-offs in third place, with a respectable 80 points. This set up another semi-final with Nottingham Forest.

Travelling to the City Ground, United took a narrow advantage into the second leg after holding Forest to a 1-1 draw, with Michael Brown converting the penalty he had won when he was scythed down by Mathieu Louis-Jean after David Johnson had given the home side the lead.

Back at Brammall Lane for the return leg and the crowd were entertained to an enthralling tie which went to extra time.

Like he did in the first leg, Johnson put Forest ahead and Andy Reid added a second for the visitors just before the hour mark, but the Blades showed their resilience and character by pulling back to level terms with goals from Brown and Steve Kabba.

With no away goals rule, extra time was used to decide the result, and a Paul Peschisolido effort and Des Walker’s own goal put the home side 4-2 up on the night only for Robert Page's own goal at the other end to give Forest hope, but it wasn’t enough as United held on for the win and a place in the final against Wolves. 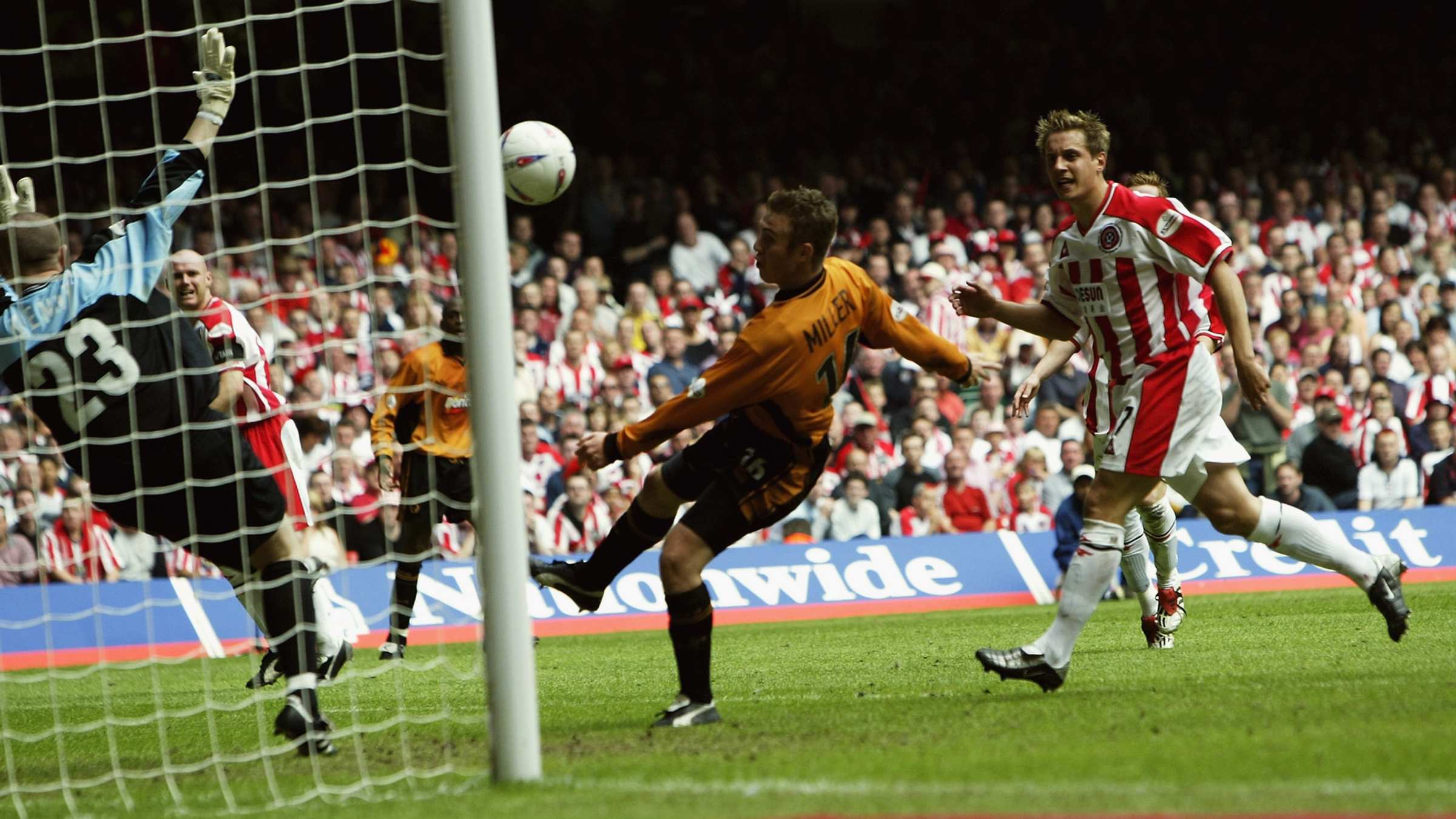 Ahead of finding out who Wolves were due to play in the final, boss Dave Jones said he either the Blades or Forest would pose a tough test in the showpiece match of the season.

“I don't know who we fancy,” he said. “It's a tough game and whoever gets there deserves to be there.

“I honestly don't think it matters who you play because if you are going to go up, you have to get results.

“Don't burden me with the history of this club because what previous managers have done is nothing to do with me. Every club is steeped in history.”

Following the win at Reading, the manager was full of praise for Rae and Murray, who both played a huge part in helping the team to Cardiff.

“Alex hadn't played the last few games so I'm really pleased for him to score - and it will make it easier for me when I play golf with him on Thursday.

“We are used to pressure so we were relishing the game. I told my players to embrace the atmosphere rather than fear it. We did that and every man wearing a gold shirt did their job.

“We knew we would be in a battle and we showed a lot of bottle and a lot of nerve to handle the atmosphere.

“They swarmed all over us but we defended well and our keeper made good saves.

“We had been trying to play on the counter-attack – but just when I decided to shut up shop, up popped Alex and that knocked the stuffing right out of them.” 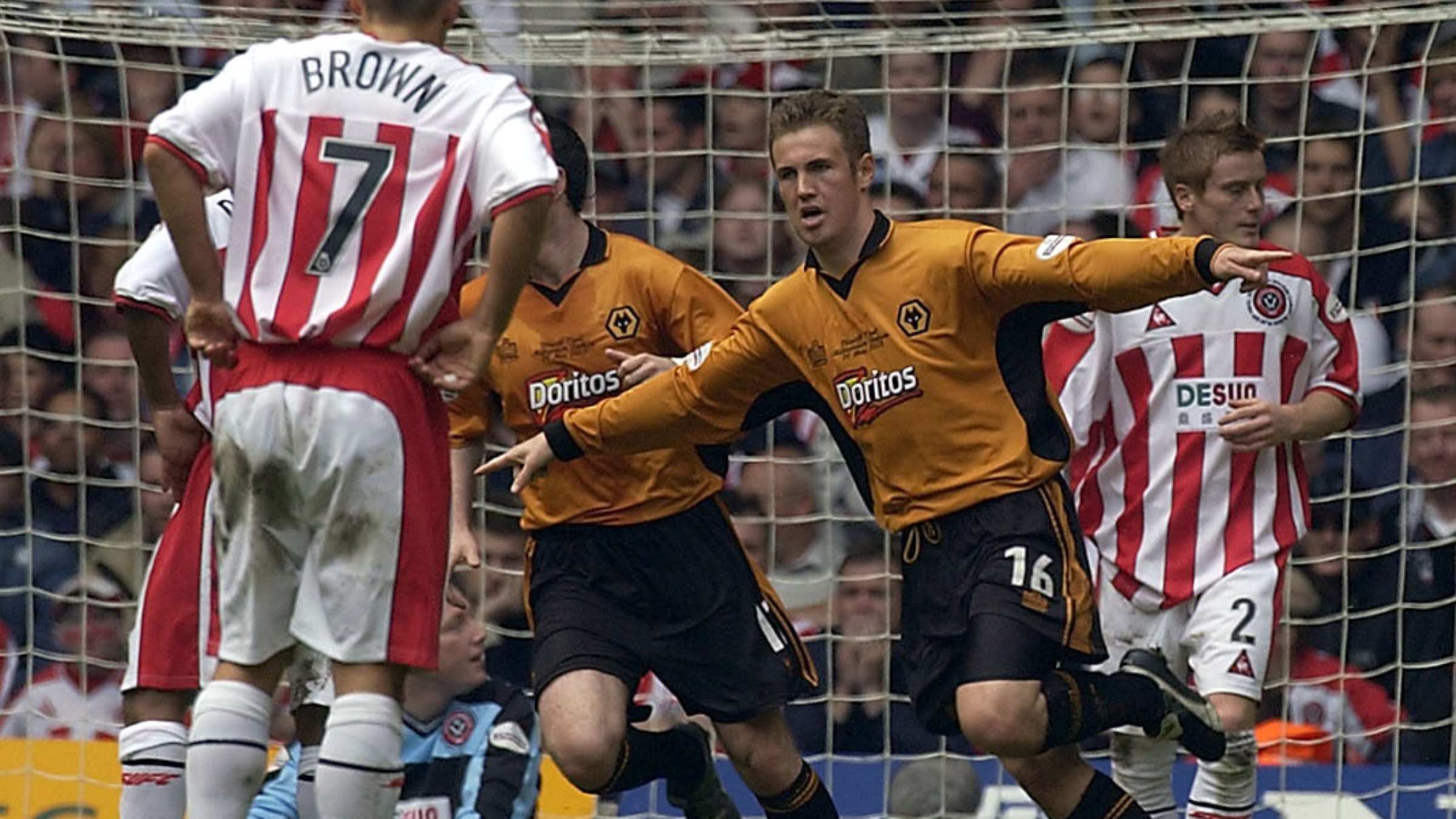 There were jubilant scenes in Cardiff as Wolves made a return to the top-flight of English football for the first time almost 20 years after a stunning victory over Sheffield United at the Millennium Stadium.

First-half goals from Mark Kennedy, Kenny Miller and Nathan Blake, coupled with a penalty save from Wolves goalkeeper Matt Murray in the second period, secured a comfortable win for the Wanderers and sent the supporters of a gold and black persuasion into raptures.

Almost 70,000 spectators were inside the Welsh national stadium for this play-off final, the prize for the winners being a place in the Premier League.

It was Wolves who got off to a superb start, taking the lead after just six minutes when Kennedy smashed the ball into the bottom corner from the edge of the United box.

Miller neatly controlled the ball before setting up the winger to beat Paddy Kenny at his near post with a cracking drive.

As the Blades readjusted, so Wolves drove forward and they twice came close to increasing their lead before United had their first attempt on goal in the 19th minute.

Keeping up the pressure, Wolves scored again two minutes later when Blake found the net after finding space behind the back four.

Just before the half-time interval it was practically game over as Miller neatly and precisely glanced a deft header past the outstretched arms of Kenny. Wolves were on the brink of returning to the top-flight for the first time since 1984, but they were made to work much harder in the second-half as United pressed forward.

Paul Butler was unlucky to concede a penalty as the ball appeared to cannon off his arm in the box, but Murray continued the fine form he had showed throughout the season by saving from the spot as he guessed the right way for Michael Brown’s effort, before getting up quickly to deny a goal from the rebound.

Then, Kennedy was fortunate not to give away a second spot-kick, while Joleon Lescott cleared from under his own crossbar.

With multi-millionaire owner Sir Jack Hayward waving to the fans from the directors’ box, Wolves saw out time with ease, and when the final whistle sounded, there were scenes of joy all around the stadium. 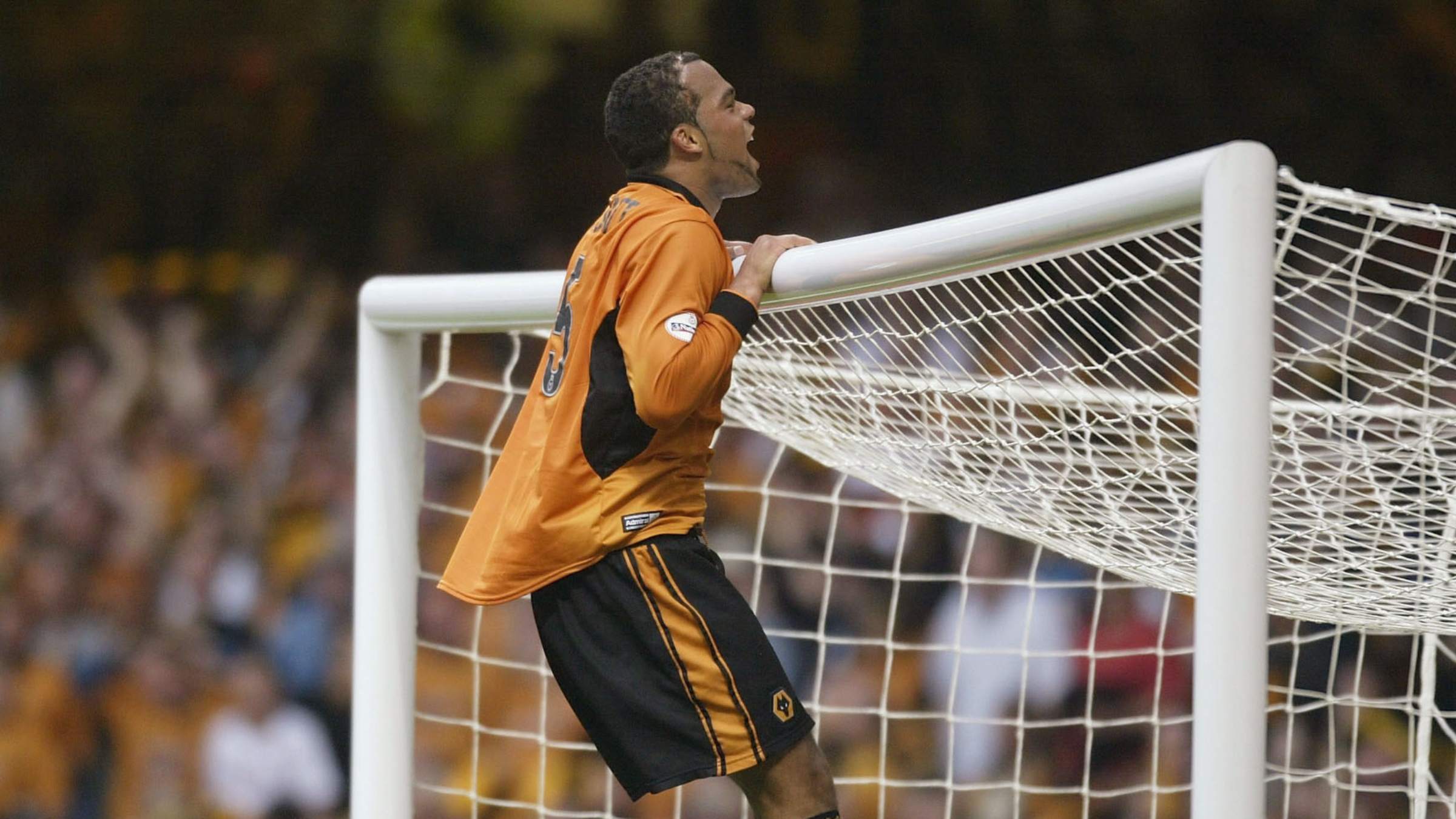 Wolves chairman Sir Jack Hayward, who had bankrolled the club without success for more than a decade, was almost lost for words after finally seeing his club reach the Premier League, in what he called the proudest moment of his life.

“I’m a bit overcome really,” Hayward, who was approaching his 80th birthday at the time, said. “It's been a great day. I was nervous all week – not just during the game – but it has been fantastic.

“It's a dream come true. They played terrific – we played as we did when we beat Newcastle.” Veteran midfielder and former England captain Paul Ince, who arrived at the start of the 2002/03 season in a sublime double swoop alongside legendary ex-Manchester United defender Denis Irwin, was pleased to get his hands on the trophy.

“I'm pleased for the young lads and these fans,” Ince said. “They need to be in the Premiership and the gaffer does too.

“We've done the job and I will go away and think about what I’m going to do next year. I’m 36 next season, I’ll sit and chat to the wife. It is going to be a hard decision – the legs were going in the last 10 minutes, but I’ll enjoy the moment for now.”

Wolves Academy graduate Murray was named man-of-the-match after denying the Blades on several occasions – including a penalty stop from Michael Brown.

“The whole season has been like a dream to me, we've all worked hard stuck together – it has been brilliant, I'm well happy,” he said.

“He (Brown) went the same way when we played them in the league game. I rode my luck a couple of times when they hit the post, but the boys were a different class.”

Mark Kennedy, who got the ball rolling with the opening goal, paid tribute to their beaten opponents.

He said: “I'm delighted for everybody - it has been a long time coming. It is harsh on Sheffield United, but we came through it last year and I’m sure they will too. They were a credit to their club.

“We have a lot of big-game players, a lot of young lads but who have played a lot of games and got a lot of talent. The hard part now is to stay up.”

Kenny Miller put the icing on the cake with the third goal, and he added: “It’s great for the club, the fans and everybody involved with the club. It was great to get a goal but who cares when you win?

“We stuck to our guns, the tactics were spot on and the lads at the back were superb. I can’t explain how it feels. We’ve got Manchester United and Arsenal next year – bring them on!"

Relive the full 90 minutes at Cardiff with some of the key men involved as Matt Murray, Joleon Lescott, Lee Naylor, Colin Cameron and Kenny Miller, as well as manager Dave Jones, join Mikey Burrows and Chris Iwelumo for the latest episode of Big Match Revisited.

The special episode will premiere at 8pm on Tuesday on Wolves’ YouTube channel, before being available in the archive at tv.wolves.co.uk.