Ahead of the new year, supporters were asked to vote for their favourite Wolves goal from the past 10 years from a shortlist of 50.

From that collection of 50 great strikes, fans could select the five finishes they deemed were good enough to earn the overall title of Wolves’ Goal of the Decade for the 2010s.

All the votes have been collated and we can reveal the top 20 goals of the last ten years – as chosen by Wolves supporters – are:

During a four-game unbeaten Premier League run, which included victory over Tottenham Hotspure, as well as draws with Villa and Everton, Wolves also won 3-1 at Upton Park. Matt Jarvis’ goal – the third of the afternoon, following finishes from Kevin Doyle and Ronald Zubar – came through a quick counter-attack which saw the winger pick up the ball in the centre of midfield before racing through the Hammers’ defence and slotting the ball into the bottom corner of the net.

Relegation to League One saw massive changes at Molineux, however, one of those who had maintained his place in the squad having been brought in the previous season, Bakary Sako almost broke the net against Sheffield United. The Mali international’s piledriver from 30 yards out flew into the top corner to earn his side a 2-0 win over the Blades at Molineux. That win was part of a dominant start for Wolves in the third tier, as Kenny Jackett’s side lost just once in their opening 18 matches. 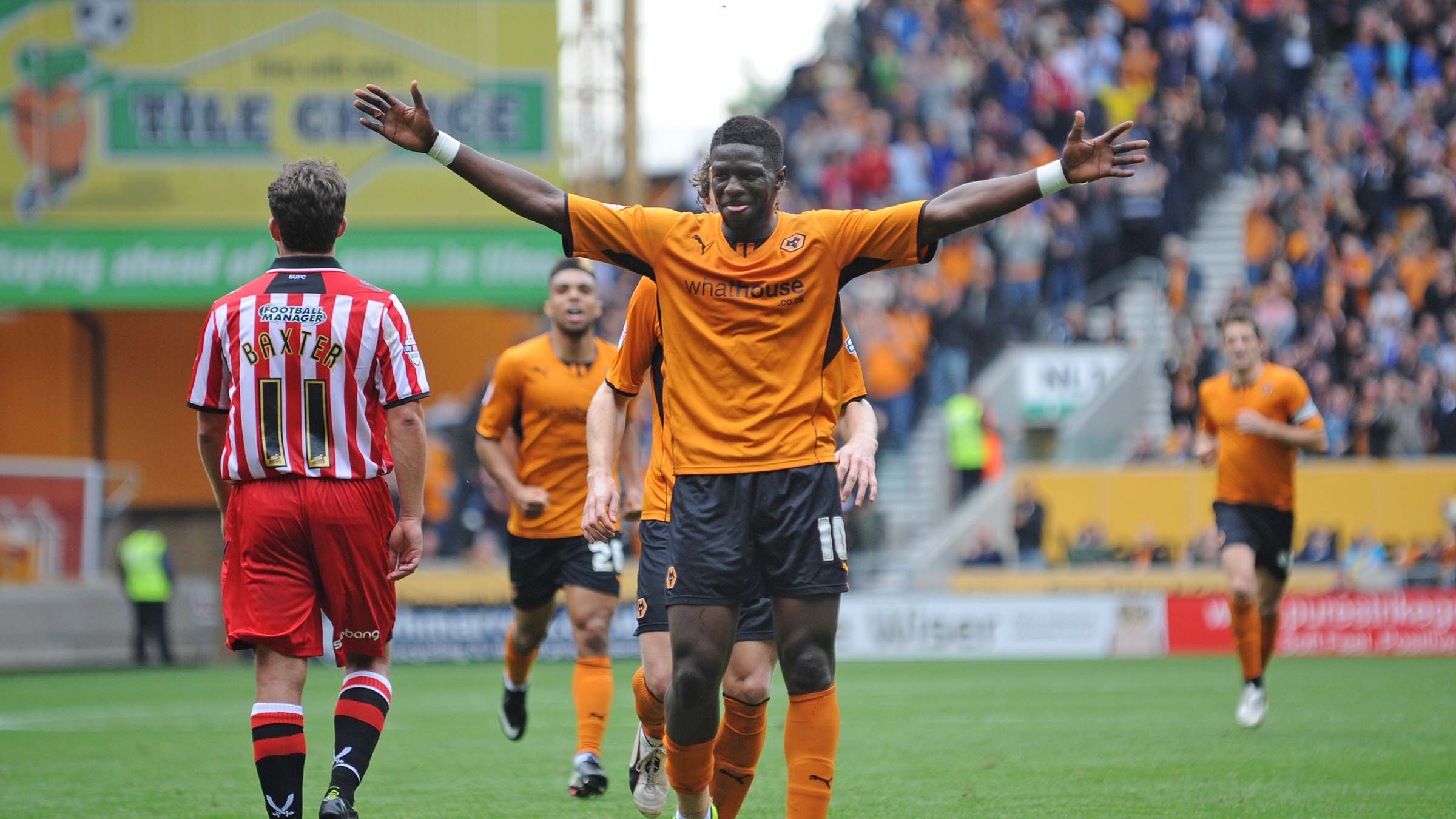 In a season where not much went right for Wolves, James Henry’s last-minute rocket at the Macron Stadium was one of the highlights. With Bolton leading 2-1 going into the 95th minute of the match, the winger was played the ball 30 yards out from goal before taking a touch and launching an almighty effort into the top left corner of the goal to earn a point for his side.

Although his relationship with the Wolves supporters might have been tarnished by the end of his spell at Molineux, Jamie O’Hara delighted the visiting crowd with his first goal in gold and black when he put his new side ahead against their Black Country rivals at the Hawthorns. From a Nenad Milijas free-kick, O’Hara broke into space just over 20 yards from goal, before curling an unstoppable shot into the top corner of the net.

The first goal of the decade to make the top 20 came as David Jones finished off an 18-pass move to hand his side a 1-0 win over Tottenham Hotspur at Molineux. Jones was heavily involved in the build-up, linking well with Kevin Doyle before finding Matt Jarvis on the wing, who took a touch and lifted a cross into the centre of the Spurs box which was tucked away on the half-volley ball Jones. 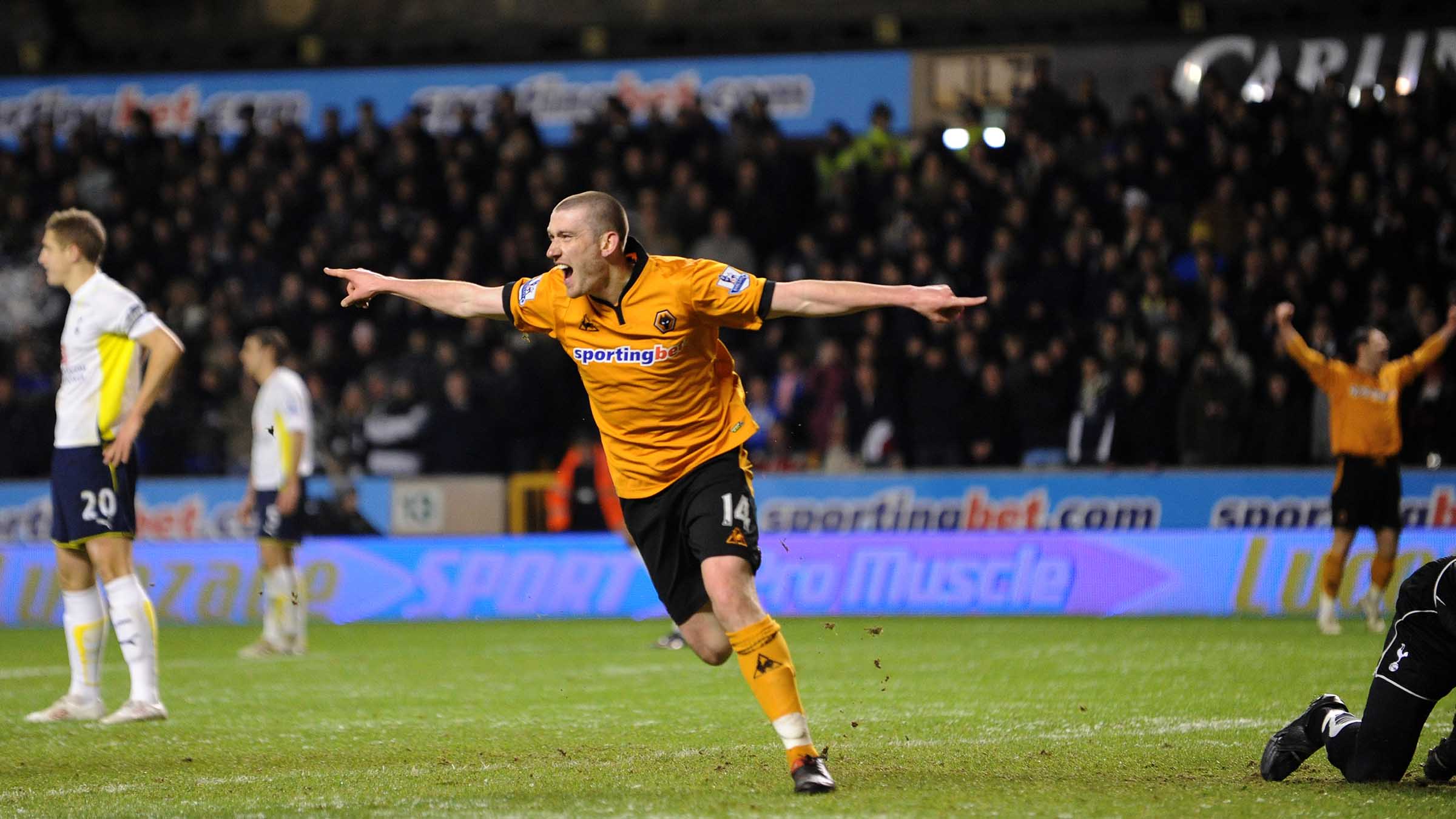 In a game which swung left and right, Wolves finally secured the three points against Leeds United thanks to Dave Edwards’ header. With the game sitting at 3-3 and going into the final minutes of the match at Molineux, Kevin McDonald floated a cross from the left into the area and Edwards jumped up highest to flick the ball into the top right corner. Although not the greatest goal on the list, it was a memorable moment which stood out in a season which was largely forgettable for the old gold.

Back in Europe after a 40-year absence, Wolves invited Armenian side FC Pyunik to Molineux for the Europa League third qualifying round. With Nuno Espirito Santo’s men already seven goals to the good on aggregate, Diogo Jota drove the ball into midfield before playing a pass to the feet of Raul Jimenez. On the edge of the box, the Mexican turned and chipped the ball back to Jota who had continued his run before launching a stunning overhead kick into the corner of the net.

The 2010/11 season got off to a perfect start for Wolves, as David Jones scored the 13th best goal of the last ten years by smashing home a free-kick from the edge of the box. The midfielder stole the show when Karl Henry rolled the free-kick into Jones’ path before the midfielder flicked the ball up and lashed it over the Stoke wall, off the underside of the crossbar and into the back of the net, in an ingenious piece of skill.

A topsy-turvy contest with Rotherham United, which Wolves were leading 3-1 at half-time, looked to be ending in a draw with both teams having scored four goals. But up stepped captain Sam Ricketts. With 90 minutes on the clock, the skipper burst forward from right back, and having played a one-two with Dave Edwards, curled an unstoppable left footed effort into the top corner, earning all three points for his side.

2018/19’s ‘Goal of the Season’ was finished off by Diogo Jota, who got on the end of an outstanding team move to open the scoring against Cardiff City. Starting out in defence, the ball was touched by almost all of the Wolves players before finding its way into midfield and the feet of Raul Jimenez. Neat and quick one-touch passing between Jimenez, Morgan Gibbs-White and Jota left the Bluebird defenders not knowing where to go before the Portuguese forward slotted the ball home from inside the area.

Back in the Premier League following a six-year absence, new signings Raul Jimenez and Joao Moutinho linked up to get Wolves back on level terms at Old Trafford. Helder Costa did well to get past Luke Shaw before crossing towards Jimenez. With his back to goal, the Mexican laid the ball towards Moutinho on the edge of the area to lash a rocket of a left-footed shot beyond the gloves of David De Gea and into the top corner.

The first of three Ruben Neves goals to make the top 20 put Wolves ahead against Sheffield United at Molineux to maintain an 11-point lead at the top of the Championship. A long ball over the top of the Blades’ defence was brought down by Ivan Cavaleiro who was tackled as he raced into the area. However, the ball rolled out to his Portuguese compatriot 25-yards out from goal, with Neves taking one touch to set himself before posting the ball into the top right-hand corner and off the post.

The goal which helped Wolves avoid the drop. Mick McCarthy’s side were facing relegation as they were 3-1 down to Blackburn Rovers at Molineux with just three minutes remaining of their final match of the 2010/11 season. But Stephen Hunt picked up the ball at the edge of the area and placed his shot into the far corner of the net, with the goal meaning Wolves would be safe by the virtue of goals scored in the most dramatic of season endings.

For the second time in Premier League history, Wolves came out on top of a pair of crazy games against Leicester City to win 4-3 at home. The third and final goal of Diogo Jota’s hat-trick – coming in the 94th minute – was the pick of the bunch. Catching Leicester on the break, Ruben Neves launched a pinpoint ball to Jimenez on the right wing before slotting a pass straight to Jota to fire beyond Kasper Schmeichel to send Molineux into raptures. 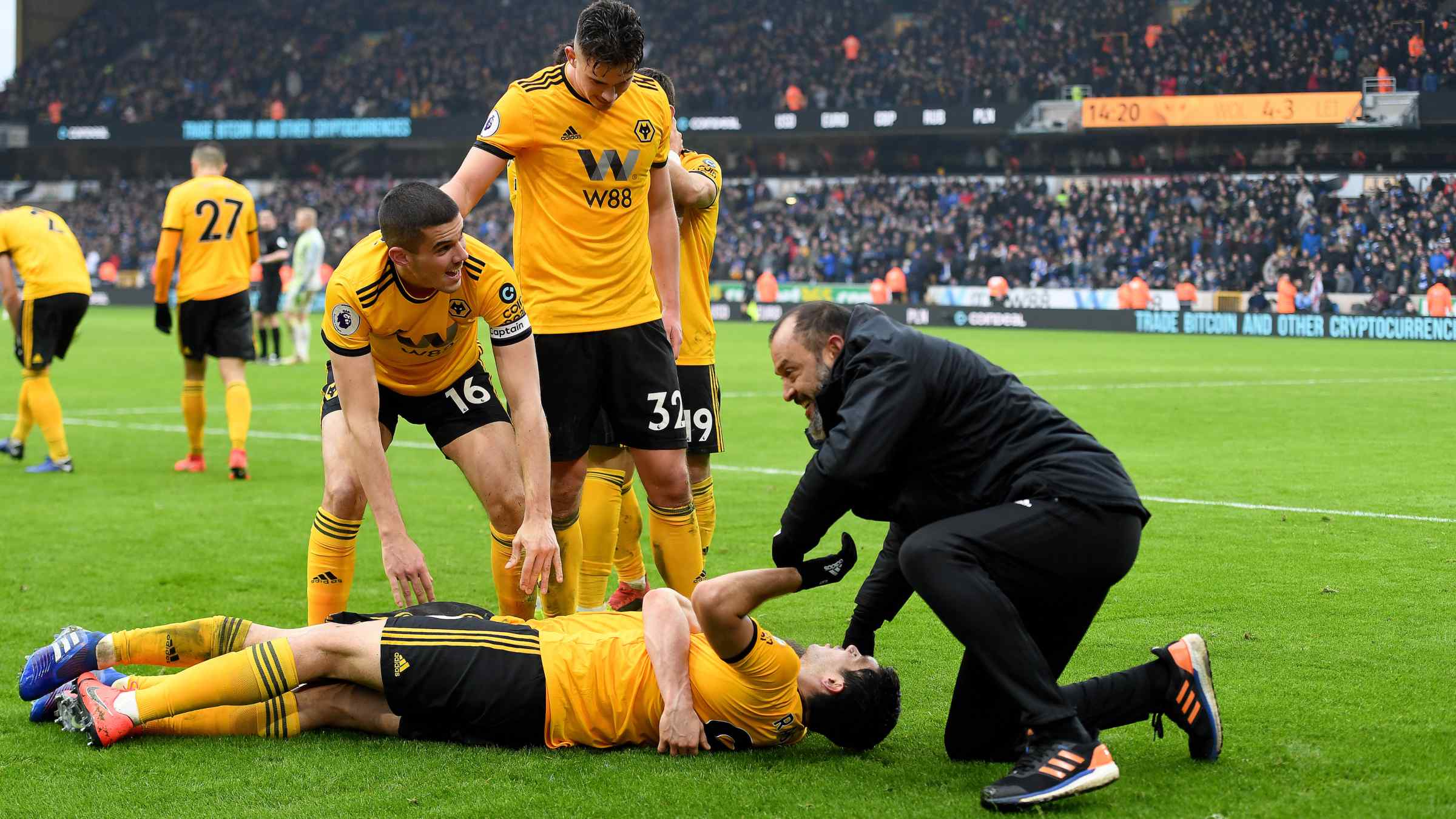 A night that will live long in the memory of anyone who was at Ashton Gate that evening as the moment Wolves showed they were heading the for the Premier League. With a heated tie entering added time all square, Barry Douglas whipped a free-kick towards the far post and Bennett sneaked round the back to head the ball into the back of the net. Nuno, who had been sent to the stands by that point, could not control himself as he celebrated wildly in the director’s box.

A cracker of a goal to kickstart Wolves’ current Premier League campaign, Wolves found themselves behind to Manchester United at Molineux, but from a short corner, Joao Moutinho played a one-two with Diogo Jota before feeding the ball to Ruben Neves 25-yards out from goal. After taking a touch to set himself, the midfield maestro curled an unstoppable shot beyond the outstretched glove of David De Gea and off the crossbar into the net.

Another finish from this season which will be ever remembered as it earned Wolves the first of their two wins against Premier League champions Manchester City. After defending stoutly against a barrage of City attacks, Wolves quickly broke on the counter through Raul Jimenez who powered up the pitch, dribbling the ball between the legs of Nicolas Otamendi before knocking a pass to Adama Traore who took a touch and placed the ball into the bottom corner. 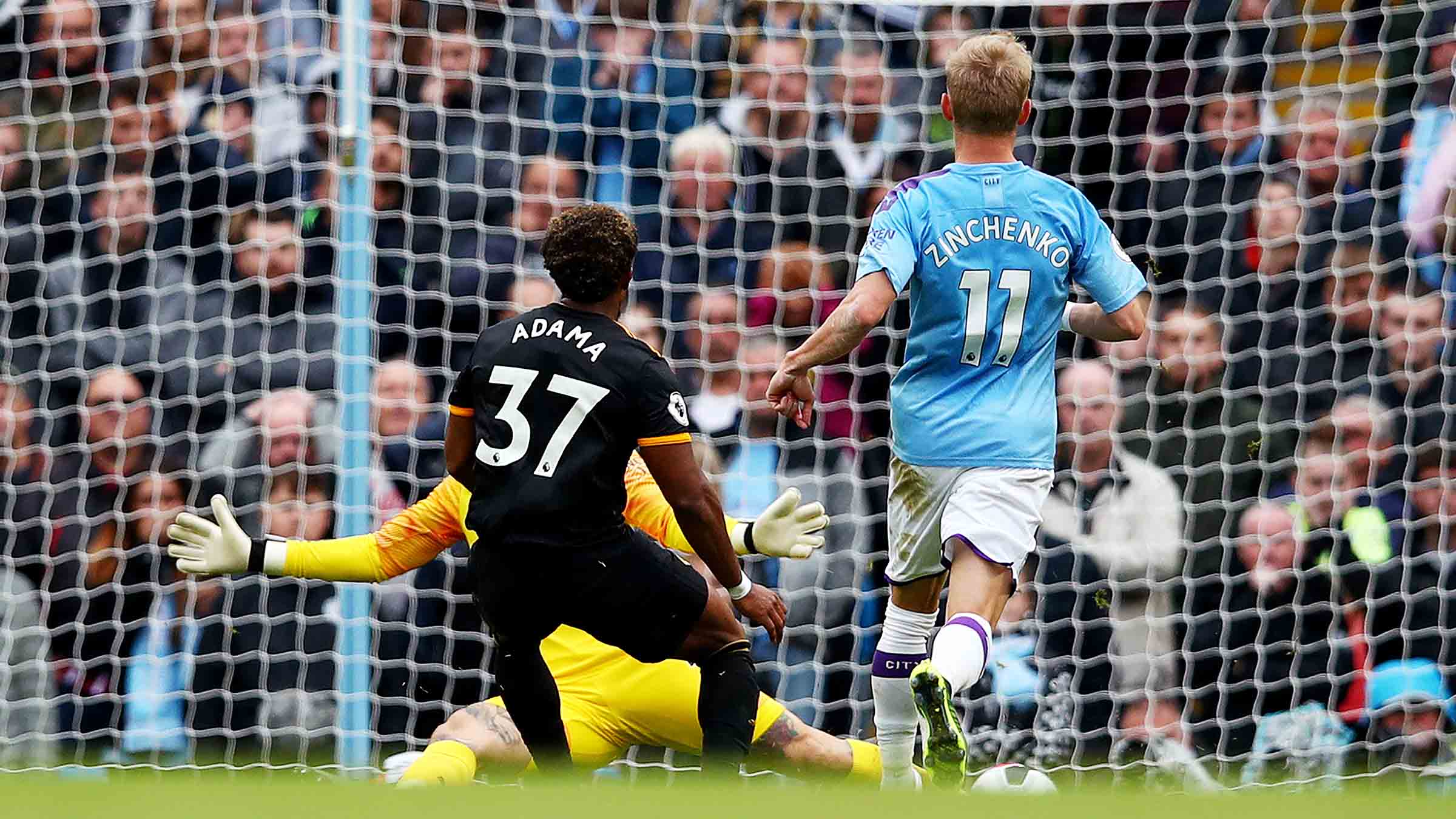 Another quick counter-attack was voted as Wolves’ third best goal of the decade as Wolves secured a place in the semi-finals of the FA Cup with victory over Manchester United. After Leander Dendoncker cut out a pass into the Wolves area, Raul Jimenez flicked the ball towards Diogo Jota who sailed through the United defence, left Luke Shaw in his wake, and powered into the area to fire a low drive past Sergio Romero, launching incredible scenes at Molineux.

Although the FA Cup semi-final at Wembley Stadium ended in heartbreak for Wolves, there was jubilation just after half-time when Raul Jimenez netted a goal against Watford which missed out on being named the best of the last ten years. With Wolves a goal to the good, Matt Doherty’s cross into the centre of the area was controlled on his chest by the Mexican, who on the turn volleyed a bicycle kick into the back of the net. We all know what happened next… 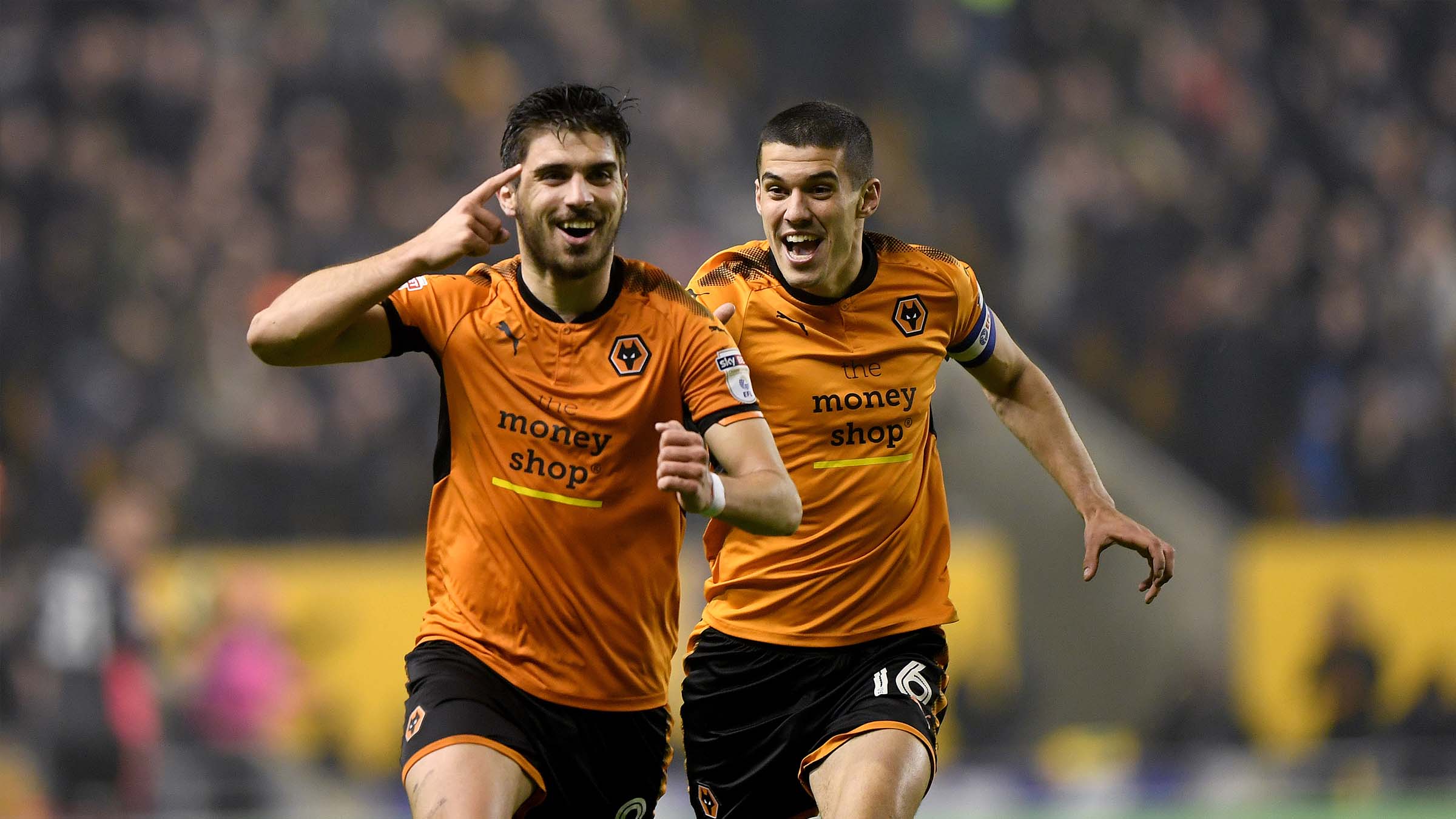 There was only ever going to be one winner in Wolves’ Goal of the Decade – which some might even argue is the best goal of the decade scored by any team in football during the past ten years. With the Championship title all but sown up, Derby County were the visitors to Molineux for a game in front of the Sky Sports cameras. Barry Douglas’ corner was headed clear, but only as far as Ruben Neves, 30 yards out from goal. The Portuguese’s first touch with the outside of his right boot lifted the ball into the air but was slightly behind him. However, this was no trouble for Neves who, on the volley, was somehow able to direct the ball straight into the top corner of the net and out of the reach of Scott Carson – a goal which will go down as one of the greatest in football history.

Watch all 20 goals in the video below...