With the season reaching its conclusion next weekend, Wolves will face Norwich City on Sunday afternoon in what will be their final Molineux game of the campaign.

There will be a host of celebrations taking place at the stadium, as the match is the annual Wolves Foundation Focus Fixture, where the club will be raising money and awareness for its official charity.

Following full-time, the players will return to the pitch, where they will be joined by the double winning women's first-team for a lap of appreciation, while the end of season awards will be announced, so supporters are urged to remain in their seats after the final whistle.

Ahead of the 2pm kick-off, here is everything the 32,000 supporters who are attending the match need to know before arriving at the stadium.

Limited tickets are available for this fixture and can be booked online at tickets.wolves.co.uk or by calling the ticket sales line on 0371 222 1877. Tickets are on general sale.

Season ticket holders will be able to gain entry to the stadium using their season ticket smartcard. When arriving at the turnstile, supporters should tap and hold their smartcards at the front of the reader.

Match to match tickets for this fixture were delivered as print at home tickets or uploaded to individual membership cards as specified by each supporter at the time of purchase.

Supporters that chose to upload their ticket to their membership smartcard should follow the same procedure as detailed above for season ticket holders.

Any supporters who experience any issues relating to their tickets are advised to visit the ticket office prior to kick-off. 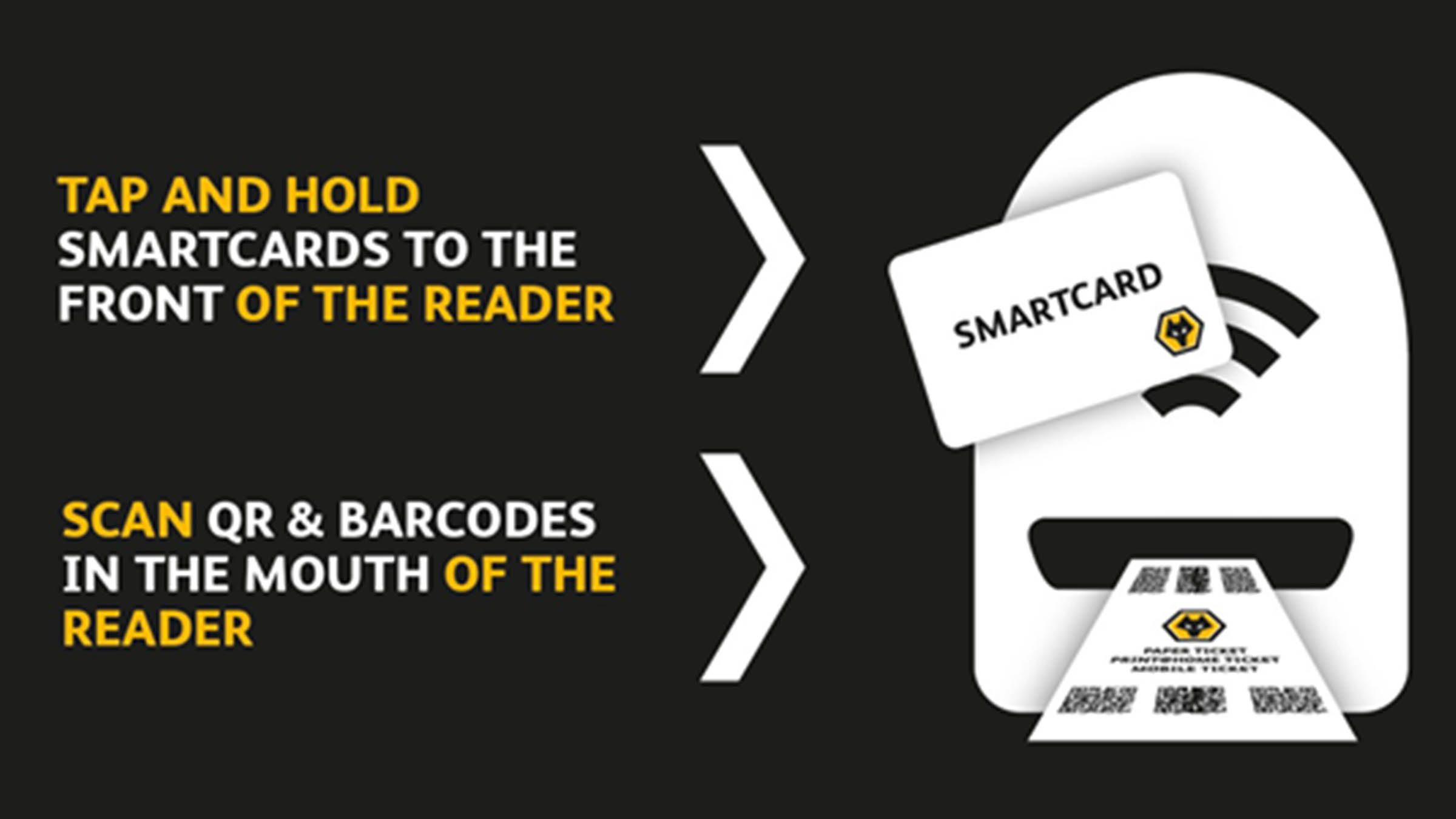 The Molineux Fan Zone is located next to Block 5 of the Sir Jack Hayward Stand and will open at 11am, giving an opportunity for supporters to grab food and drink whilst taking in the matchday atmosphere before making their way into the stadium.

The North Bank Bar is located next to Block ND of the Stan Cullis Stand and is accessible to season ticket holders and MyWolves members and will be open from 10am. Please note that supporters may be denied entry once capacity has been reached. Junior supporters are welcome.

Supporters will only be able to gain entry to the stadium using the turnstile block designated on their ticket or season ticket smartcard. Security and bag searches will take place at the turnstiles.

Searches will be conducted using wands, and you may be requested to open your own bag to allow it to be searched. Bags larger than an A4 size will not be permitted.

Concourse catering kiosks will be open inside the stadium for this fixture serving food hot and cold drinks and alcoholic drinks.

Molineux is a cashless stadium and supporters are advised to ensure they have card or contactless payment ready when being served.

When using the stadium’s amenities, such as toilets, food and drink outlets, or concessions, avoid queues wherever possible by checking to see if any of them are not in use, or following the instructions of stewards and other staff members.

If you purchase food and soft drinks, please take them directly to your seat in the bowl to allow as much space in the concourse areas as possible.

The ticket office is located between the Stan Cullis and Billy Wright stands and will be open from 10am until kick-off on the day of the game.

The Molineux Megastore is located at the Stan Cullis stand and will be open from 10am up until kick-off and again following the game.

The fan services team will be reachable by phone and email from 10am on matchday to answer any matchday enquiries. The fan services phone line will close two hours prior to kick-off, however the fanservices@wolves.co.uk inbox will be monitored up until kick-off.

The official Wolves matchday programme has returned to its usual format this season, with a 100-page edition focusing on the Premier League clash and packed full of exclusive and bespoke content and features.

Both Pedro Neto and Jonny adorn the cover and the pair are featured inside with an in-depth interview focusing on their return to the pitch following injury. There are also features with Jose Sa and Raul Jimenez, as well as former Wolves and Norwich striker Iwan Roberts.

Fans can also discover more about the players of the future with our range of Academy content, including interviews with defender Justin Hubner, and a focus on the women’s first-team with Birmingham County Cup winning captain Anna Price and star striker Maz Gauntlett.

Programmes, priced at £3.50, are available to buy by from the Molineux Megastore, from the various programme sellers around the stadium, from the catering kiosks, and by clicking here. 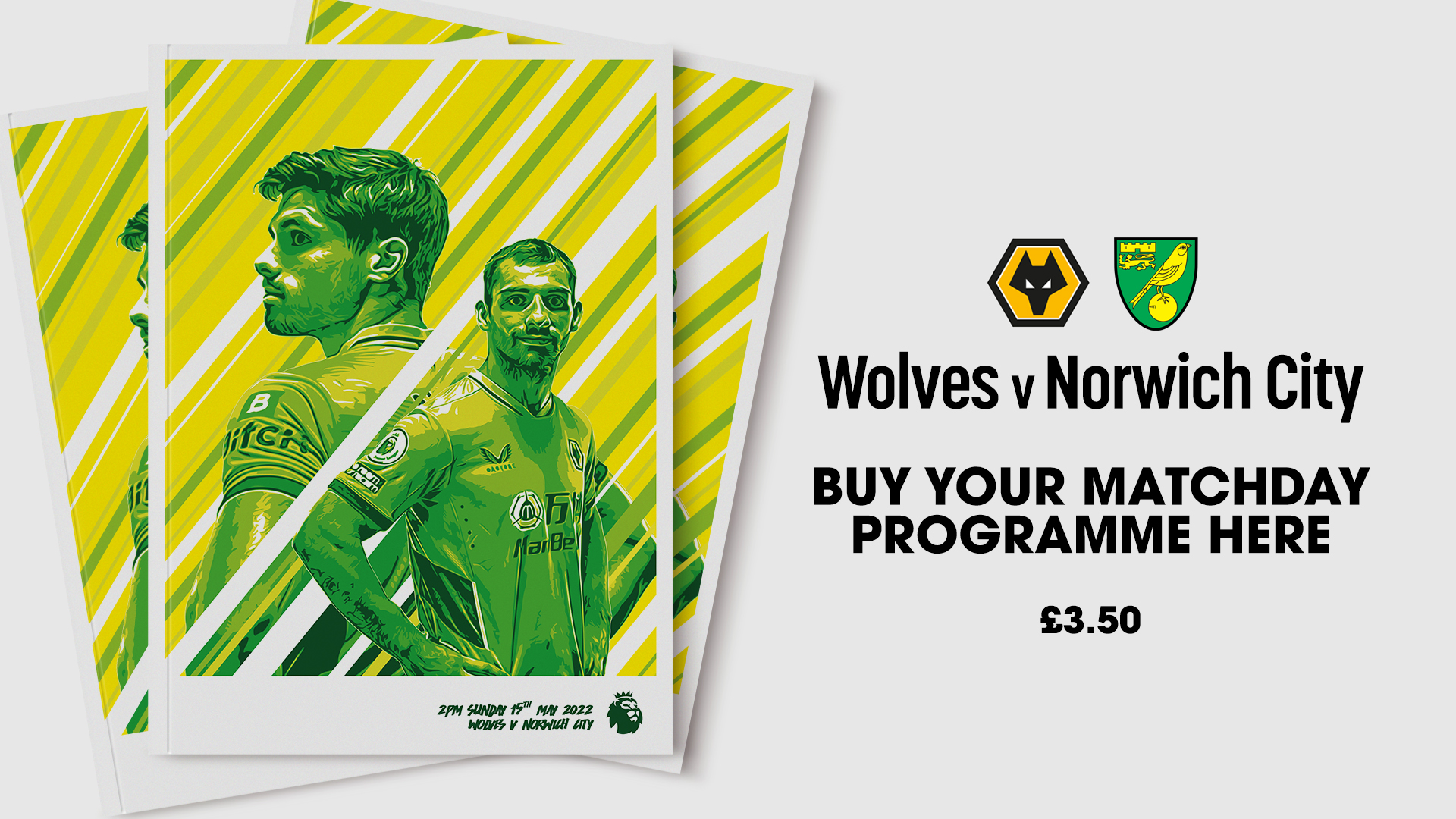 Works have now started to transform the street scene outside the Civic Hall which is part of the city centre public realm works.

Minor works have begun at the end of Paternoster Row with a public footway closure in place during this time. We advise supporters travelling to Molineux from the city centre on foot to follow the pedestrian diversion route that is in place, directing the public down Cheapside and past St Peter’s Church.

In the following months there are more works scheduled and information will follow accordingly. More information works can be found here.

Travelling to Molineux and parking

With as many as 32,000 people trying to get to Molineux Stadium on a matchday, we are very conscious of the impact on the environment and our neighbours.

When making your journey to Molineux Stadium we ask you, wherever possible, to consider travel options that will help us to reduce local traffic jams and inconsiderate parking around the stadium.

Supporters should be aware that the West Midlands Metro is currently out of use. As a result trains are expected to be even busier than normal on matchdays.

Fans travelling to the ground by rail should make sure they leave adequate time for any delays.

Here at Wolves, we want all our fans to be able to travel safely when using public transport, so we’ve partnered with Moovit, the world’s number one urban mobility app, to ensure you have the most up-to-date and accurate journey planning capabilities at your fingertips.

Moovit will provide special instructions for Wolves fans about the best public transport routes to ride, including how to arrive at the dedicated fan areas and specific fan entrances. Not a Moovit user? The Moovit App is available for free on iOS, Android and Huawei AppGallery

Alternatively, supporters can simply use our new journey planner tool by clicking here to plan any journey, benefiting from real-time alerts, service alerts and more, for anywhere across the world.

Supporters can check availability for official matchday parking and book spaces here. Details of further council owned car parks in the city can be found here.

A number of road closures around the stadium as part of spectator safety measures will affect supporters on matchdays. Please refer to the road closure map here and information below for details.

Waterloo Road will be closed from the roundabout leading to ASDA up to the traffic lights at Newhampton Road from 90 minutes before kick-off up until a period at the discretion of the matchday safety officer at the end of the game – expected to be between 15 and 30 minutes.

Molineux Street, Sir Jack Hayward Way and Whitmore Hill will be closed as detailed on the map here from one hour before kick-off, up until a period at the discretion of the matchday safety officer at the end of the game.

Visiting supporters will be located in blocks NU5, NU6 and NU7 of the Stan Cullis Stand upper tier. Concourse catering kiosks will be available for visiting supporters, serving food, hot and cold drinks and alcoholic beverages.

Molineux is a cashless stadium and visiting supporters are advised to ensure they have card or contactless payment to hand. Away supporters will also be welcome in the Molineux Fan Zone.

Discrimination and antisocial behaviour will not be tolerated at Molineux. Supporters who witness this kind of behaviour should speak to their nearest steward or send details to 07723 479 887 starting their message with WOLVES.

New anti-discrimination measures have been implemented by the Premier League for the 2021/22 season as football continues to work to eradicate discriminatory behaviour in society.

Clubs have agreed to enforce league-wide punishments (which may include bans from all Premier League grounds) for any individual found to have behaved in a discriminatory or abusive way toward any club employee, player, match official, steward or fan attending a Premier League match – whether in-person or online.

For full information on the new measures, click here.

The Baroness Heyhoe-Flint accessible lounge will be open for this fixture. The accessible lounge has two accessible toilets, chairs and tables and is a space where disabled supporters can meet others before the game and half time. The room is located in the lower Stan Cullis stand opposite NL1. Please do not store wheelchairs in this room while the game is in progress.

Audio Description Commentary is provided by a specially trained team giving second by second commentary of where the ball is and what is happening in the game. It is available for supporters who need that extra help watching the game but must be pre booked by emailing Laurawright@wolves.co.uk  Once booked a set will be delivered to your seat before kick-off. This service is available to both home and away fans.

Lift access is available for supporters with accessible needs who sit in the upper tiers of the Stan Cullis and Billy Wright stands. To gain access to one of the lifts please contact laurawright@wolves.co.uk for further information. We advise supporters to arrive early for lift use.

Disabled Liaison stewards will be available for your questions and support throughout your visit.  We have the specially trained stewards at wheelchair locations in Stan Cullis, Steve Bull and Sir Jack Hayward Stand.

Supporters can view a series of FAQs relating to matchdays at Molineux by clicking here.

Any supporters who have questions or need further assistance in relating to matchday should email fanservices@wolves.co.uk. We welcome your feedback on your matchday experience and you can direct and feedback to the same email address.