It’s back to the future for Beth Merrick as the former England Under-23 player returns to Wolves Women 18 years after entering the club’s then Centre of Excellence at the tender age of seven.

Lifelong Wolves supporter Merrick spent six years in the youth system before spending a decade at Aston Villa followed by stints at Sheffield United and Coventry United ahead of re-joining her first club.

“Beth’s an amazing signing for us,” says manager Dan McNamara, who has embarked on an ambitious team strengthening programme as Wolves prepare to step up to the National League’s Northern Premier Division.

McNamara’s team were granted ‘upward movement’ from Division 1 Midlands after looking title certainties in each of the last two seasons before the pandemic-enforced premature ending of both campaigns.

While Wolves are moving upwards Merrick has dropped down a tier from the Championship, but the highly rated winger had no qualms about making the switch after speaking with McNamara about the club’s plans for the future.

The Lichfield based PE teacher, a Wolves season ticket holder for 16 years along with her father John and brother Paul, says: “After talking to Macca and seeing the fantastic facilities the women’s team have, it was a no-brainer to sign.

“I’d been offered a full-time contract by Coventry, but I love my teaching job and didn’t want to give that up. So joining Wolves was perfect for me, and I can’t wait to help the club compete in a division where I’ve had some success in the past.” 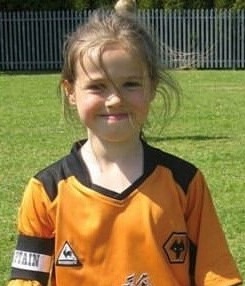 Merrick played a key role for both Villa and Coventry as they gained promotion from the Northern Premier to Championship level, so it would be quite a hat-trick if she could repeat the feat with Wolves.

“I’ll definitely be looking to help us compete at the top end of the table,” says the 25-year-old winger, “and with the squad we’ve got and one or two more signings I honestly believe we can do that.”

Having spent several seasons in the Championship and played for England at every age group level from Under-17 to Under-23, Merrick’s experience and proven quality will be invaluable to Wolves says McNamara.

“The players and staff are excited that we’ve signed Beth,” says the manager, “and we’re all looking forward to working with her. She’s a tremendous player and as well as her undoubted quality we know the passion she has for the club.

“Her experience speaks for itself and she’ll bring that to the team as well as her technical ability. We want to attract the best players to the club moving forward and Beth is the calibre we’re aiming to bring in.”