It’s a return to action as the Emirates FA Cup rolls around again this weekend and, as Wolves look for a fifth win in five, wolves.co.uk presents the main Talking Points pre-match.

Wolves’ proud history in the FA Cup is well documented and the modern day groups have been determined to continue that, with the old gold reaching the fifth round in three of the last five seasons, and the chance to make it four in six now awaits. Of those three, it’s the 2017 success at Anfield which is more frequently referenced, when Richard Stearman and Andreas Weimann stunned the Kop and sent a packed away following at the opposite end into delirium. Elsewhere, success over Shrewsbury Town in 2019, albeit after a replay at Molineux, and ground out victory at Chorley, in the most classic of cup ties last year, complete Wolves’ fourth round recent successes. In fact, Wolves haven’t lost at this stage of the competition since 2011 – a 1-0 home reverse to Stoke City – however, between that day and the arrival of Fosun, Wolves failed to make it past the first hurdle of this historic competition.

Norwich stand in the way of another trip to the fifth round and it’s the first time the clubs have met in the FA Cup since 1980. After a 1-1 draw at Molineux, Wolves headed to Norfolk on a Wednesday evening in January and won 3-2 thanks to goals from John Richards, Mel Eves and George Berry, just weeks before returning to Carrow Road for an eye-catching 4-0 win in the league. More success over the Canaries is what Lage is now eyeing.

#2 Canaries back on their perch

When Norwich lost at the London Stadium in mid-January, their Premier League status looked in serious threat, but back-to-back victories have breathed new life into their season. A 2-1 victory over Everton relit the spark, and a thumping success over relegation rivals Watford launched City out of the drop zone. With an important Premier League clash against Crystal Palace to come midweek, Dean Smith will now look to balance maintaining momentum with keeping his team geared up for a crack at survival – Manchester City and Liverpool are waiting after the clash with the Eagles.

Their last outing in the FA Cup, at Charlton Athletic, ended a run of five straight defeats. Smith opted for a mix of consistency and changes, leaving the likes of Brandon Williams, Milot Rashica and Teemu Pukki out of the starting line-up, but the latter two combined for the 79th minute winner of a tight cup tie. When picking his team for Molineux on Saturday, Smith has been boosted by the return of Mathias Normann and Billy Gilmour from injury, but will be without goalkeeper Tim Krul, as well as Jacob Sorensen, Lukas Rupp and Andrew Omobamidele. 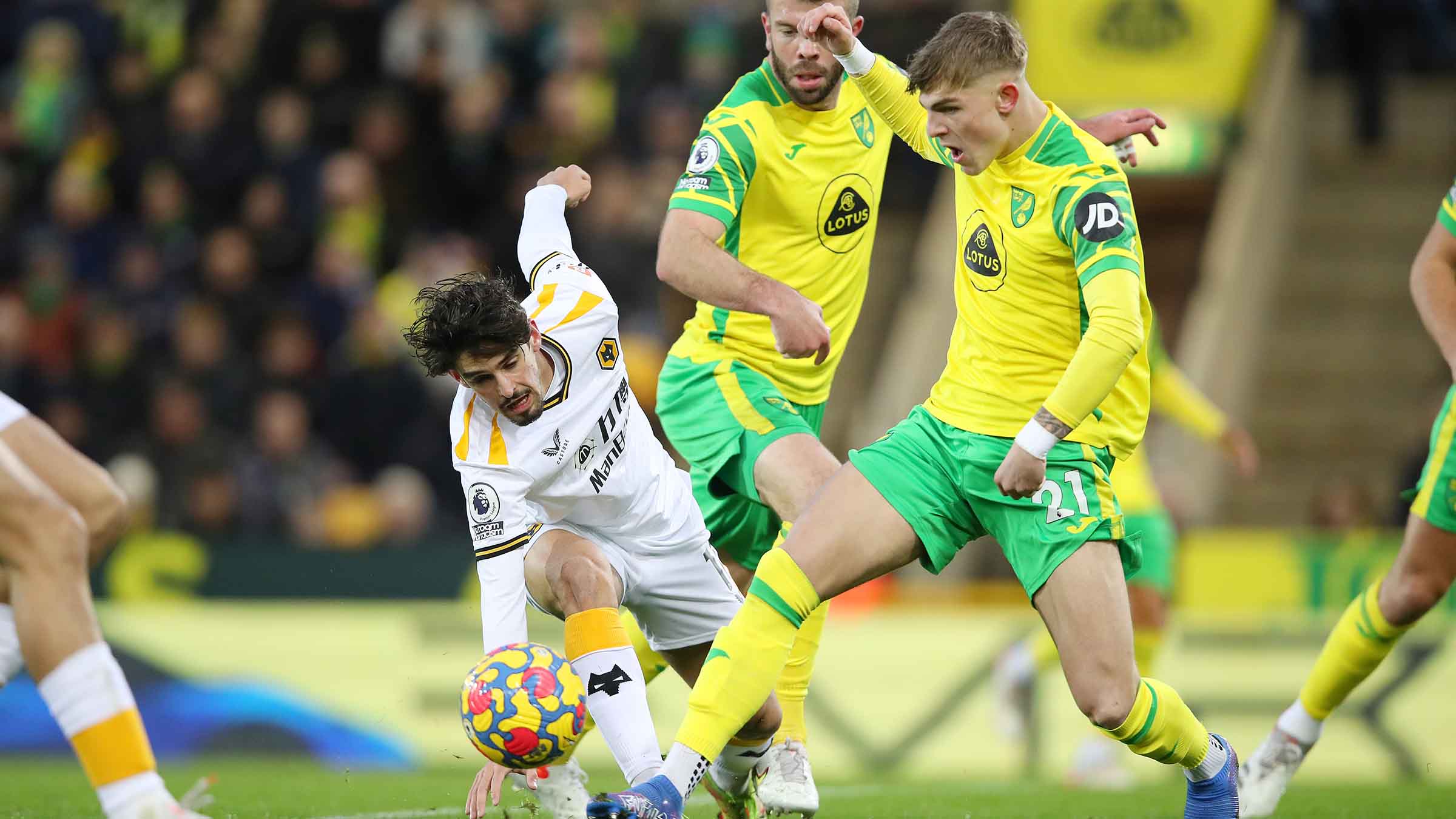 It’s a milestone which has been on the horizon for a while, and given the consistency of selection and performances, has arrived right on time – Conor Coady’s 300 Club entrance. Should the captain feature against the Canaries, he’ll become the 36th player in the history of Wolves to make 300 appearances for the club. However, Coady will be the second player to reach the milestone in less than two years, after Matt Doherty hit 300 against Chelsea in July 2020, but the Irishman failed to surpass 302, which, unless circumstances change dramatically, won’t be the case for Coady.

The 28-year-old joined Wolves from Huddersfield Town in 2015 and, after playing in various positions but getting his appearance tally up, never looked back following the arrival of Nuno Espirito Santo. The captain has missed just one Premier League game since the club’s return to the top flight and, due to his high fitness levels and determined attitude, often remains a constant in cup teams, including against Sheffield United in the previous round of the FA Cup. Coady felt the pain of the 2019 semi-final defeat as much as anyone in the old gold camp, so helping his team into the fifth round on his milestone day would be the perfect celebration.

Test your knowledge of the captain, as he approaches a big milestone 🐺

Against the Blades in the previous round, Lage fielded a strong team, and suggested he’ll pay similar respect to the competition this time around. Romain Saiss and Raul Jimenez have both been on international duty many miles from Wolverhampton, so are unlikely to be rushed back for Saturday, particularly with Arsenal just around the corner. Jonny was pictured training with the group this week, but Lage said he’ll be selecting from the same group as the Brentford fixture.

While John Ruddy usually comes in for cup games, the likes of Ki-Jana Hoever, Marcal and Francisco Trincao may hope for minutes, having missed out on the starting line-up against the Bees. One man keen to keep his place will be Daniel Podence, who has a taste for goals in cup competitions this year – he’s bagged four across the Carabao and FA Cup, including two in the last round – same again this weekend?