Things are going well for Wolves currently, unbeaten in five Premier League matches, four of which have been victories, and as attention turns to a trip to Crystal Palace, wolves.co.uk highlights the key Talking Points.

Monday was the latest good day’s work during Wolves’ autumn, as Everton departed the West Midlands empty handed. Since the start of September, Bruno Lage’s men have claimed 16 points of the 21 available to them in the Premier League, through five wins and one draw, and during that period only league leaders Chelsea (18) and in form Arsenal (17) have earned more. The victory over the Toffees was Wolves’ second consecutive home victory in the Premier League – the last time that happened was back in July 2020, when, ironically, the two opposition were the two they’re now in between playing – Everton and Palace.

Unfortunately, or fortunately for the neutral, they’re coming up against another side with their tails up in the Eagles on Saturday. Few saw their victory over reigning champions Manchester City coming last Saturday, but they were good value. Wilfried Zaha, becoming the first Palace man to score 50 top flight goals, already had the visitors in front before Aymeric Laporte hauled him down and saw red. Having held City at bay, Conor Gallagher wrapped things up late on. Now, the Eagles are searching for consecutive wins in the Premier League for the first time since last winter, when one of their successes came against Wolves at Selhurst Park.

A brilliant evening under the lights at Molineux!

#2 Sharing the goals out

Goals from all areas of the pitch are always a desire of Wolves head coaches, or those of any club in truth, but they’re not always a reality. However, during this latest cycle of fixtures since the October internationals, it’s very much been the case for the old gold, who’ve enjoyed six different goal scorers in the last three games. While Raul Jimenez was already off the mark for the season, his first goal at Molineux was a sight to behold and came after Maximilian Kilman had become Wolves’ tenth different goal scorer of the season already.

Of the team which faced Everton on Monday, only three outfield players are still to find the back of the net this season – Nelson Semedo, Rayan Ait-Nouri and Joao Moutinho – could Selhurst Park be the place to change that? Ait-Nouri did, of course, score his only goal in old gold against the Eagles on his debut around this time last year. 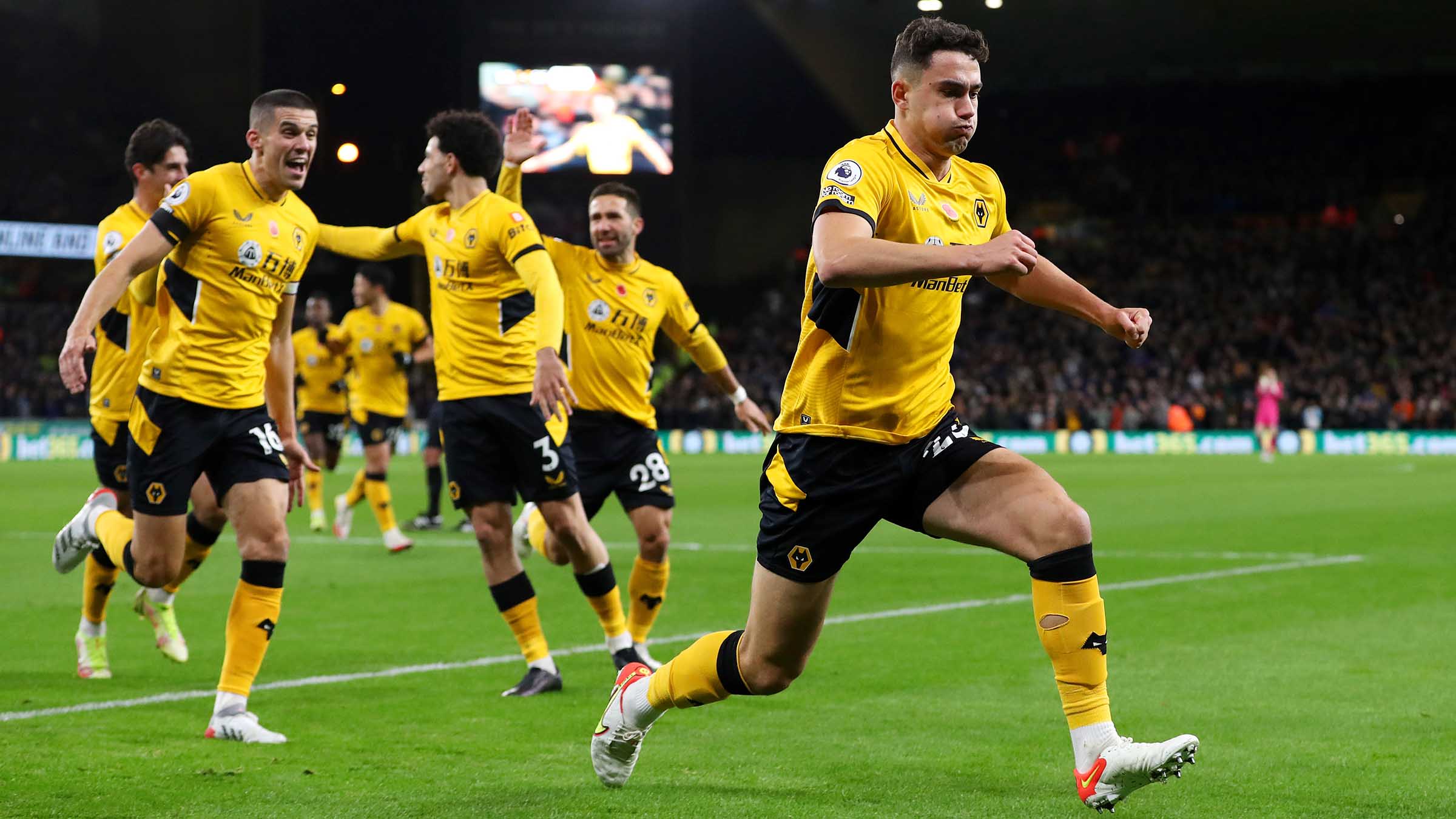 During his opening five Premier League matches at the Wolves helm, Bruno Lage named an unchanged side for four of them – after the opening day he kept faith with the same eleven for fixtures against Tottenham Hotspur, Manchester United, Watford and Brentford. However, since that run, he’s yet to repeat the trick, changing his side for each of the last five fixtures, all of which have ended with at least a draw in his side’s favour. On Monday, Ruben Neves and Francisco Trincao were recalled to the side, having started on the bench at Leeds United, and the desired result followed. Neves’ performance particularly rewarded the head coach, as he covered 11.7km, around 2km higher than the league average, made 79 passes and served up a 91% pass accuracy on those 79.

So, what decisions may he be tempted to make this week. Leander Dendoncker, Adama Traore and Daniel Podence will all hope their head coach is in the tinkering mood once against at Selhurst Park. Dendoncker and Traore both started at Elland Road, while Podence has been Lage’s first substitute off the bench in the last three games. The Portuguese is also likely to provide an injury update on Marcal during his Friday afternoon press conference, with the Brazilian missing the past two games due to a calf problem, opening the door to Ait-Nouri who took his opportunity with an assist for Kilman on Monday. Lage will reveal more on Friday when he speaks to the press.

The numbers behind the performance.

#4 Enjoying life in the old smoke

The opening day at Leicester City feels a good while ago now, and in football terms it really was, as since that afternoon Wolves have travelled to five different English stadiums and avoided defeat at them all. It all began at Nottingham Forest in the Carabao Cup, as Wolves opened their scoring account for the season in a 4-0 win, before a first Premier League success arrived at Watford. Southampton away belonged to Jimenez, scoring for the first time since his return, while the incredible scenes at Aston Villa have been well documented. The draw at Leeds brought the only dropped points of that run, but still represented progress, and that brings us to the here and now – Palace away.

After returning to the Premier League in 2018, Wolves were well known for enjoying their trips to the capital – they almost went two entire seasons without losing in London between 2018 and 2020. After ten unbeaten matches, which included a win and draw at Selhurst Park, Wolves finally surrendered their record on the final day of the 2019/20 campaign at Stamford Bridge. Last season, playing in front of empty stadiums, that record fell by the wayside, but the old gold still managed wins at Arsenal and Fulham. The last trip came in May, with a defeat to Tottenham Hotspur, so Saturday presents a fresh opportunity – can Wolves spark a few run down on the Thames?