The focus returns to the Premier League on Sunday, and a clash with Southampton live on Sky Sports, and wolves.co.uk is the perfect place to get clued up with Talking Points.

St Mary’s is a stadium Wolves have enjoyed themselves at in recent years – winning on their last two trips there. During 2019/20, Wolves became know for their comeback victories and few were as enjoyable as the one in Hampshire in the January. 2-0 down at the break, Pedro Neto found the back of the net and the packed away end started to believe. A rare positive VAR decision that season allowed Raul Jimenez to level from the spot, before that classic partnership of the Mexican and Adama Traore combined for the winner – can they do it again this weekend? Last season, Wolves were in need of the points to turn the tide and victory at the expense of the Saints was much needed. It was another comeback too, and another penalty, as Ruben Neves cancelled out Danny Ings’ opener, before a brilliant individual goal from Neto won the points.

This season, the Saints are yet to win at home, but have claimed positive points against Manchester United and West Ham United. Wolves have won twice on the road in all competitions and were unlucky on their other outing at Leicester City, so Bruno Lage will back his team.

After defeat to Brentford last time out in the Premier League, but a positive fightback against Tottenham Hotspur in the Carabao Cup in mid-week, Lage will be contemplating which way to go with his starting eleven. Both Leander Dendoncker and Daniel Podence made goal scoring returns to the team and are now in contention again, having taken the places of Joao Moutinho and Francisco Trincao for the cup tie. Willy Boly got through the 90 minutes unscathed, his first minutes of the season, so will also fancy his chances of minutes at St Mary’s, with Romain Saiss sitting out on Wednesday. Sadly, Yerson Mosquera will have to wait longer for his Premier League bow, having come off injured against Spurs and joined Jonny and Neto in the treatment room.

The Saints themselves will be forced into at least one change, with Jack Stephens suffering a knee injury against Manchester City last time out and being ruled out for up to 12 weeks. Mohammed Salisu looks set to take his place alongside Jan Bednarek, as he did off the bench at the Etihad last week, but after that, Ralph Hasenhuttl hinted midfielder Oriol Romeu could be the next in line, after moving him there against Sheffield United in the Carabao Cup in the week.

#3 The Saints are quietly marching on

Like Wolves in many ways, the Premier League table doesn’t tell the whole story for the Saints. While Hasenhuttl’s men are without a win and sit on four points, just one ahead of Wolves, their campaign has actually been brimming with positives. The only points Manchester United have dropped this season came at St Mary’s, in a 1-1 draw, while City had racked up consecutive 5-0 wins at the Etihad before being halted in their tracks by Southampton last weekend. What was even more impressive was City didn’t register a shot on target until the 90th minute that day and the Saints could have nicked the points themselves, had their penalty and Kyle Walker’s red card not been overturned by VAR.

Southampton have recovered well from losing star men Jannik Vestergaard and Ings in the summer, particularly after a disappointing start to the season at Everton on the opening day. That afternoon, Adam Armstrong at least introduced himself to Southampton with a debut goal, following his transfer from Blackburn Rovers, but has failed to add to his tally since. Other new additions include former Chelsea man Tino Livramento, who until this season was yet to make his senior debut but has started all five matches at full-back – typical of a solid start to the season for his club. 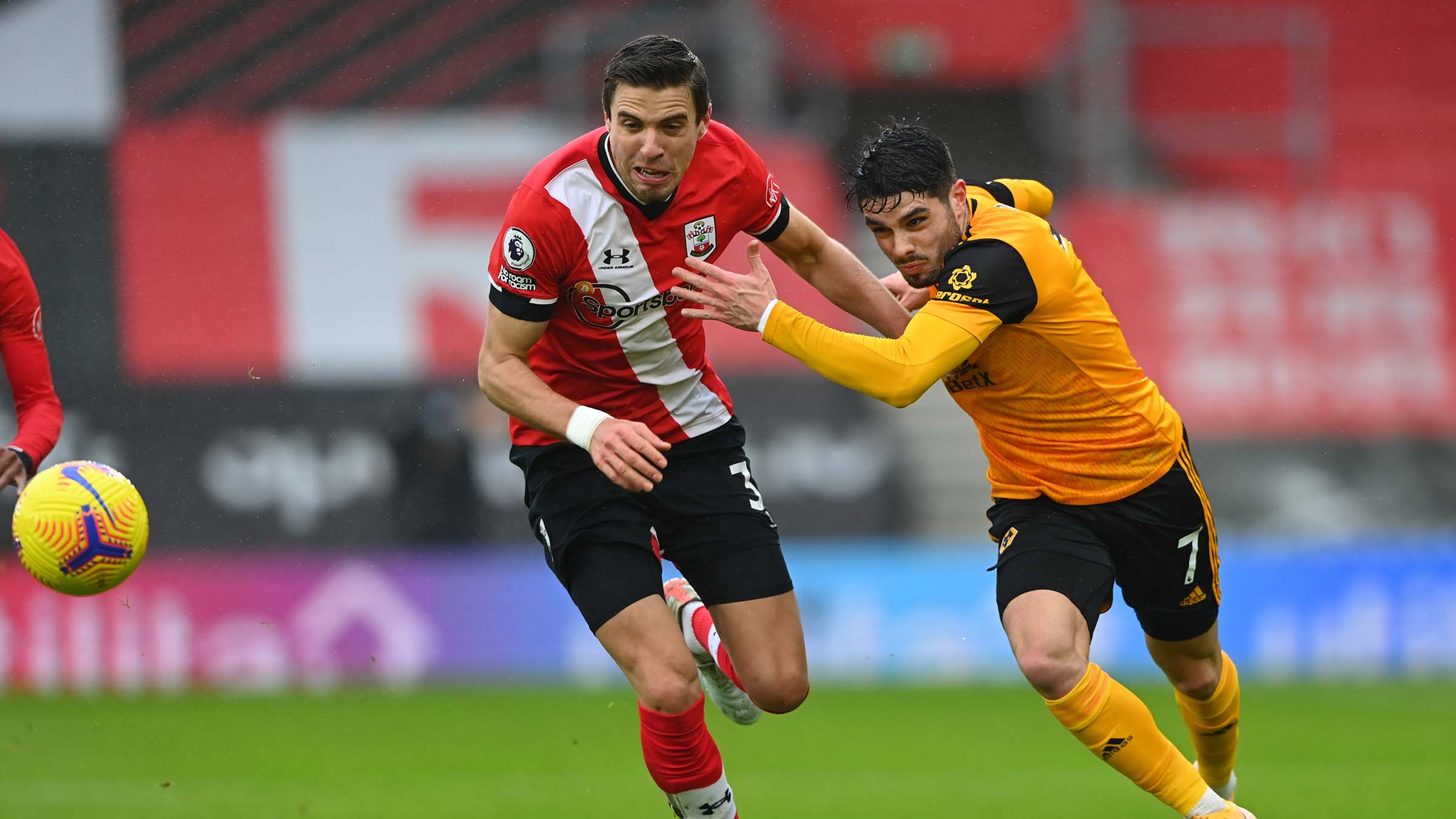 #4 The goals will come for Wolves

Goal scoring has been a regular topic of conversation in Wolverhampton in recent weeks, so seeing two fly in against Spurs in midweek was a welcome sight. Now, the aim will of course be to reproduce that level of finishing in the Premier League. Only Liverpool and Manchester City have attempted more shots than Wolves, who’ve had 80 efforts in the Premier League, but crucially, Wolves are the joint lowest scorers alongside Arsenal and Norwich City. Lage knows that stat must change and six goals in the Carabao Cup shows the finishing ability is there and no doubt that will be an area of focus in the lead up to Sunday.

The head coach will also take heart from the confidence of two of his attacking players, Hee Chan Hwang and Jimenez [interview on wolves.co.uk on Saturday night] have both reiterated their confidence in the goals coming, hopefully at St Mary’s on Sunday. Jimenez has three goals to his name against Saints in the past, while Hwang scored on his last away Premier League outing at Watford. What better way to get back on track in front of goal than live on Sky Sports on Sunday afternoon? 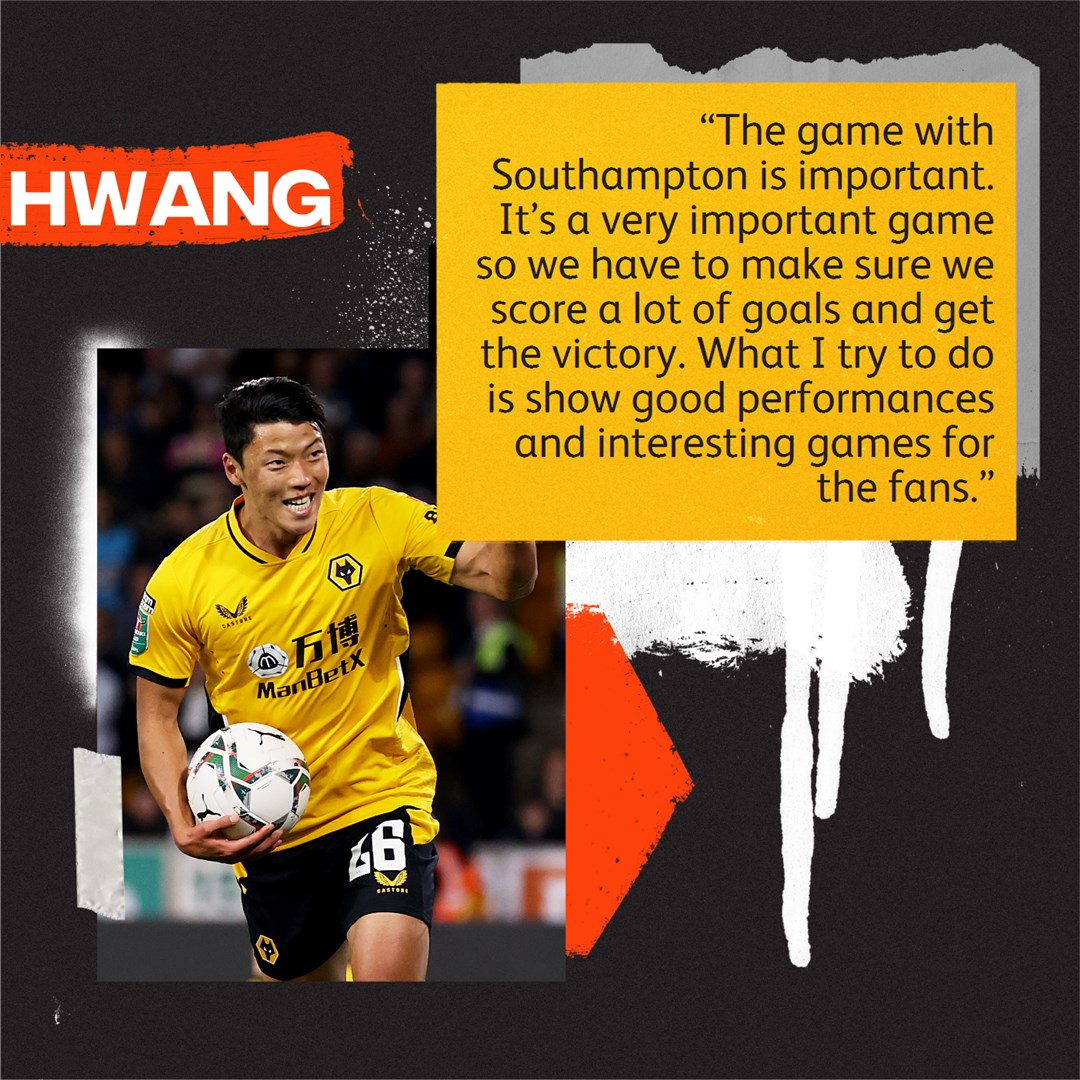