5 things to know | Tottenham vs Wolves

Wolves face their final fixture without supporters on Sunday when travelling to Tottenham Hotspur, who they’ve enjoyed some thrilling battles with in recent years, and here are five things to look out for this time.

1. A magical day out last year

When Wolves last travelled to the Tottenham Hotspur Stadium for their maiden visit, the garden couldn’t have been much rosier from an old gold perspective. Nuno Espirito Santo’s side had just returned from Barcelona having booked their place in the Europa League last 16 and a packed away end made themselves heard in north London. Those 3,000 supporters that day went on to witness the latest addition to Wolves’ conquests over the traditional ‘top six’ of the division. Matt Doherty and Diogo Jota twice pulled Wolves level with their final goals in front of the pack, before Raul Jimenez produced a vintage winner to spark scenes of jubilation.

Little did anybody know, it would be Wolves’ final away game in front of supporters for 14 months, but as they make the same trip on Sunday, they do so knowing this game will be the last in an empty stadium. By the time Everton rolls around the following Wednesday, small numbers of supporters, albeit with a home affiliation, will be inside, replacing the empty sounds of top flight football stadiums. For one final time, Wolves’ players will need to rely on themselves for inspiration, knowing there’s nothing the pack would want more than to be in that Tottenham away end of Sunday.

2. Will youth get a chance again?

Against Brighton a week ago, Wolves became the first Premier League team to name five players born in the 2000s in their starting line-up, showing the future is a bright one. Ki-Jana Hoever, Rayan Ait-Nouri, Vitinha, Morgan Gibbs-White and Fabio Silva were all given the opportunity to impress, as Nuno released the shackles off his youngster. Each one put in a performance to be proud of, with three directly involved in the two goals which helped Wolves come from behind to clip the Seagulls’ wings. Now, Tottenham provide the opposition with threats amongst some of the best in the league, not least the potent partnership of Harry Kane and Son Heung-min.

However, Nuno regularly speaks of finding a balance between youth and experience, and the performance of 34-year-old Joao Moutinho in the midfield allowed those youngsters to express themselves against Brighton. The Portuguese returned to the team after two games missing through injury, and this week it could be the turn of Willy Boly. The defender was absent for the West Bromwich Albion and Brighton clashes, but featured in training this week, alongside Marcal, who may give Nuno food for thought on Sunday.

3. Wolves to ruin the European dream?

Champions League qualification for the side who got to the 2019 final is looking slim now, but Tottenham Hotspur will still be keen to secure a Europa League spot during the final three games. It’s been a mixed campaign for Spurs, who led the way in December, but suffered an alarming slide down the table, culminating in Jose Mourinho’s sacking last month. Since then, Ryan Mason took over to become the Premier League’s youngest ever manager at 29 and has overseen victories over Southampton and Sheffield United, but also defeats in the Carabao Cup final to Manchester City and Leeds United last time out.

However, with their striking options, Wolves will be wary. Son is enjoying his most productive season in front of goal, bagging 22 times in all competitions, while Kane is on a mission for the Premier League Golden Boot, sitting level with Mo Salah on 21. Elsewhere, Dele Alli is enjoying a new lease of life and Gareth Bale struck a hat-trick against the Blades, so attacking options are aplenty for Mason. 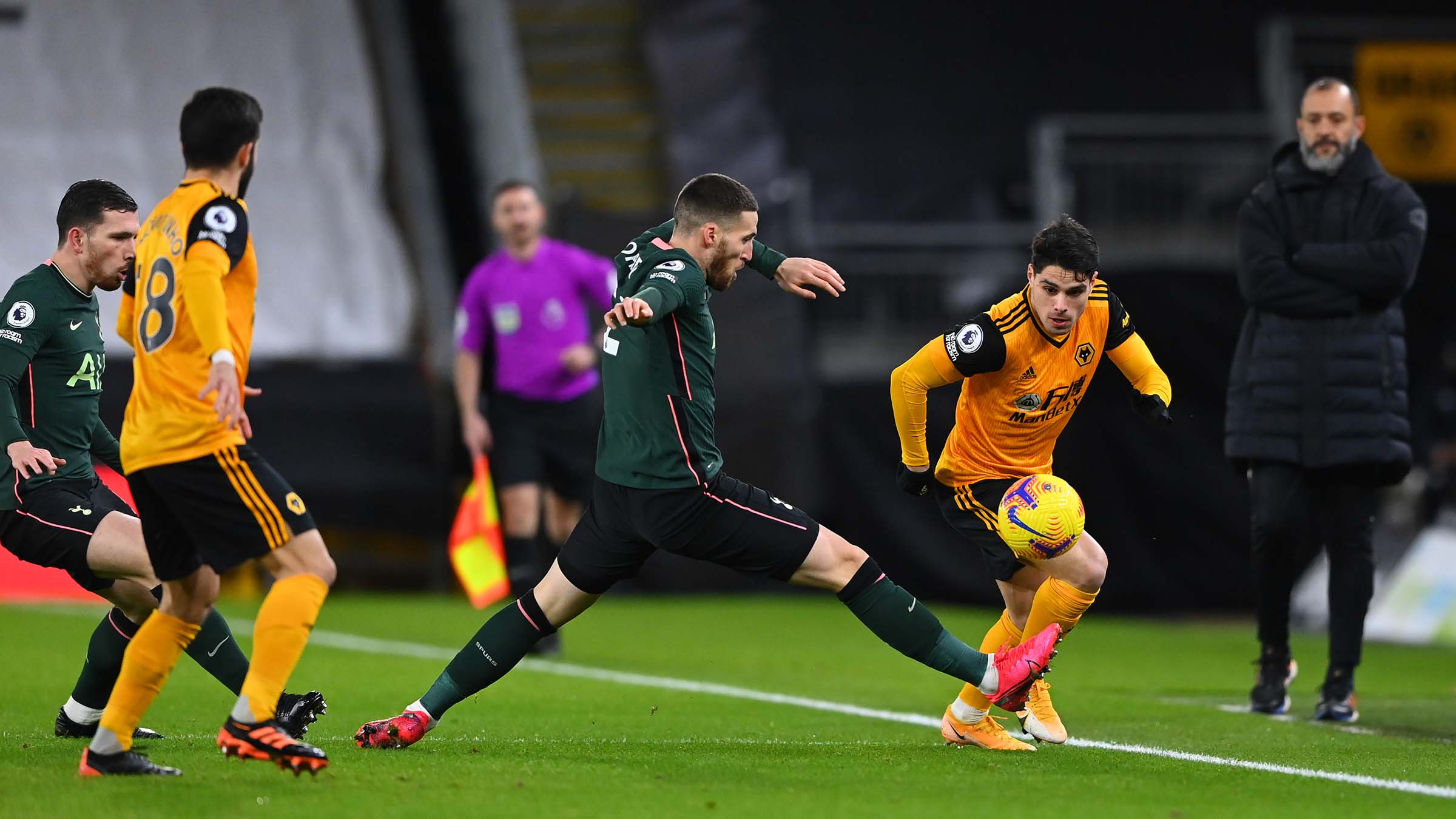 With the end of the season in sight, thoughts will naturally be turning to the summer, and with the summer comes a transfer window which will interest Nuno and his staff. His thinking will be motoring now, particularly as he has three members of his current squad currently on loan, and decisions must be made, should Wolves want to make them permanent members of the pack. The trio in question are Ait-Nouri, VItinha and Willian Jose.

Ait-Nouri has been given the most opportunities to impress, due in part to Jonny and Marcal’s injuries, and played his part in Gibbs-White’s winner a week ago. Vitinha has enjoyed a run in the side of late, after being patient, and has been bright, particularly in the Black Country derby at the Hawthorns. Thirdly, Jose scored his first goal for Wolves against Sheffield United, but has been starting on the bench of late, due to the performances of Fabio Silva. All three will be chomping at the bit to test themselves against Spurs on Sunday – one of three remaining opportunities to impress this campaign.

Since Wolves returned to the Premier League under Nuno, they’ve enjoyed some thrilling contests with Spurs and share an equal record in terms of points with the north London side. Prior to this season, all four contests had resulted in away wins, and December’s fixture was going that way at Molineux until Romain Saiss intervened four minutes from time. Despite Wolves’ success in going toe-to-toe with Spurs, there’s one accolade they’ve failed to achieve in any of the five meetings – that of scoring first.

In November 2018 Erik Lamela began the scoring as Tottenham won 3-2, while a month later it was Harry Kane netting first, but that time Wolves fought back to win. A year later Lucas Moura was off the mark quickest at Molineux and in the reverse fixture Steven Bergwijn struck first, but again Wolves still won. In the match earlier this season Tanguy Ndombele bagged in the first minute but, as previously mentioned, Saiss stepped in at the other end of the game. If Wolves are to buck that trend and strike first in the capital, who will it be? Place your guess below.