Wolves take their five-match unbeaten run to the league leaders Manchester City on Tuesday, when Nuno Espirito Santo will be under no allusions around the size of their task, and here are five things to look out for ahead of the big game at the Etihad.

Saturday’s draw at Newcastle United saw Wolves extend their unbeaten run to five matches – a record for the season and the first time such feat has been achieved since either side of lockdown. Back in February 2020, Nuno’s side drew 0-0 with Manchester United to spark an eight-match unbeaten run, which would bizarrely stretch five months, with the pandemic wreaking havoc with the schedule.

The recent success could be put down to consistency within the team, with Nuno naming the same starting eleven for three consecutive games for the first time since January 2020. During Monday’s press conference, the head coach said it was unlikely he’ll be selecting from a different squad in Manchester, meaning Willy Boly, Daniel Podence, Marcal and Raul Jimenez will all remain at home. So, will Nuno go with the same again on Tuesday for a fourth successive game?

Manchester City’s latest win over West Ham United was their 20th in a row – to say Pep Guardiola’s side are in form would be a huge understatement. Should the Citizens avoid defeat on Tuesday night, they’ll equal their longest ever unbeaten run of 28 games. As City appear to cruise towards winning their fifth Premier League the title, with a 12-point lead on second place, they won’t be looking to let up, with hopes of a quadruple still very much alive.

Against the Hammers, Ruben Dias scored his first goal in sky blue, becoming their 19th different goal scorer this campaign, and Guardiola, enjoying his 200th win as City boss, was even able to hand legendary striker Sergio Aguero a first Premier League start since October. So, all is rosy in the City camp ahead of Tuesday’s game, but in the back of their minds will remain the fact that Wolves completed the league double over them just last season. 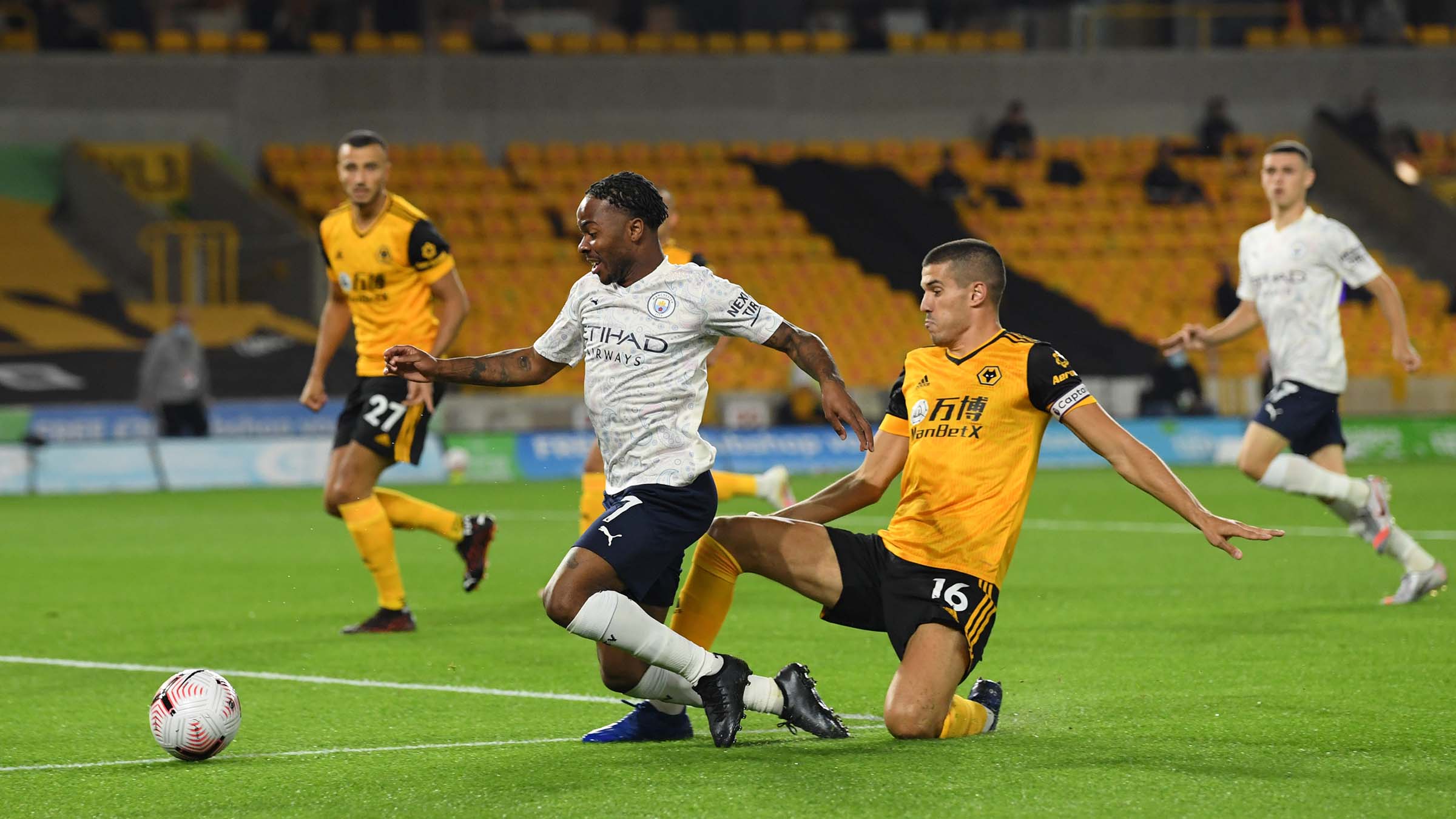 When searching for Wolves’ best home and away performances in the Premier League, few would look further than last season’s pair of fixtures against City. Of course, both were achieved with a raucous atmospheres – the Etihad away end and Molineux under the lights were a joy to be behold, but what was served up on the pitch was pretty special too.

In Manchester, Wolves produced what is known as the perfect away performance – keep things tight at the back and frustrate your hosts, then be devastating on the counter attack when the opportunities arise. After 80 minutes, City couldn’t find a way through, then up stepped Raul Jimenez and Adama Traore. With two classic breakaways, the Mexican twice fed the Spaniard perfectly, and Traore finished with aplomb, coolly beating Ederson on both occasions to send the away end into delirium.

Then, two days after Christmas, Guardiola’s side were in Wolverhampton, where things began lively with Ederson’s red card and Raheem Sterling’s retaken penalty, following VAR controversy. Once Sterling had doubled his tally, City felt in control, but Wolves had other ideas and produced a thrilling comeback, which was completed by Matt Doherty’s 89th minute winner. A special night at Molineux – the kind Wolves supporters are now longing for. For now, and hopefully not much longer, they’ll watch through their televisions, but will be hoping for similar surprises on Tuesday evening.

A minor tweak in Nuno’s system has had a significant impact in recent weeks and was once again effective at St James’ Park. When Wolves were trailing to Southampton at half-time last month, Nuno swapped his wingers around, seeing Traore move to the left and swap with Neto, who took up the right side. Since then, the pair have been flying. In the second-half against the Saints, Neto weaved his way inside from the right, onto his left, and fired home the winner. Then, a week later, Traore was at it, coming inside and hitting a rocket of a shot which led to Ilan Meslier’s own goal for 1-0.

So, come Saturday, it was little surprise the wide men would be up for it. Traore completed 14 successful dribbles, won 19 duels and produced four key passes, while on the other side, Jamal Lewis could never guess whether Neto would come inside on his left, or outside on his right. It was the latter approach which led to Wolves’ goal too, with the Portuguese’s cross setting up Ruben Neves for the equaliser. Traore and Neto’s fluidity has provided a fresh option for Nuno, who’ll hope to benefit again at the Etihad.

With the wide men in such scintillating form, Willian Jose will be the primary man hoping to benefit. Since his January arrival from Real Sociedad, the striker has been thrown in at the deep end of a hectic schedule in English football and has shown plenty of promise. The 29-year-old has linked play impressively in old gold and found himself well-placed for some good chances in his opening games at Wolves. In recent weeks opportunities in front of goal have been harder to come by, but like all good strikers, Jose will have full faith in his ability to take them when they arrive.

Nuno spoke of the striker’s natural instinct to be in the right position to score goals, which he displayed regularly in Spain, and backed his striker to get off the mark soon at his new club. What better time than against the league leaders on Tuesday?

“When we go for a crossing situation, he needs to find himself in better positions inside the box and we are on that process. Instinct you cannot teach, it has to be there, and he has it."