5 things to know | Wolves vs Leicester

The second of back-to-back Wolves home games in the Premier League sees Leicester City pitch up at Molineux on Sunday, and here are five things to note before kick-off.

Wolves now have a focal point. Willian Jose’s link up play with his teammates in the past two games has shown Nuno Espirito Santo what he’s been missing since November, when striker Raul Jimenez was injured. Against Crystal Palace and Arsenal, Wolves have asked more questions of their opposition, thanks in large part to the presence, link up play and goal threat of Jose. Now, next on the agenda for the Brazilian is a goal in old gold.

By forcing David Luiz into conceding a penalty, and subsequent red card, Jose had a direct influence on Wolves’ opening goal on Tuesday and, for those who play Fantasy Premier League, earned himself an assist. However, strikers love scoring goals and Bernd Leno kept out Jose’s fierce strike, like Vicente Guaita had done at Selhurst Park, so he’ll be setting his sights on getting off the mark against Leicester on Sunday.

Another matchday, another team to assemble for Nuno, who continues to navigate around injuries. The head coach was naturally non-committal on the topic of injuries on Friday, but should he be selecting from the same group as against the Gunners, he still has decisions to make, particularly due to the absence of his left-sided options. Jonny, Marcal, Rayan Ait-Nouri and Romain Saiss were all missing in midweek, and should that continue to be the case, Nuno is likely to either continue with Maximilian Kilman at left-back or bring Ki-Jana Hoever back into the mix, with Nelson Semedo moving left. Leander Dendoncker started on the bench against the Gunners, so will be fresh and raring to go, should Nuno opt to reinstate the Belgian, ahead of one of Tuesday’s goalscoring heroes in Ruben Neves or Joao Moutinho.

Meanwhile, the visitors have received a huge boost pre-match with the news that their leading goalscoring Jamie Vardy will make the trip to Molineux. The striker has recovered from a hernia operation and will be in the squad, although Brendan Rodgers refused to confirm if he’ll start. The situation is less clear-cut for Wilfred Ndidi, who has been absent in recent weeks due to a hamstring issue, and is touch and go for Sunday. Elsewhere, Wes Morgan, Dennis Praet, Wesley Fofana and Timothy Castagne will definitely miss out due to injuries. 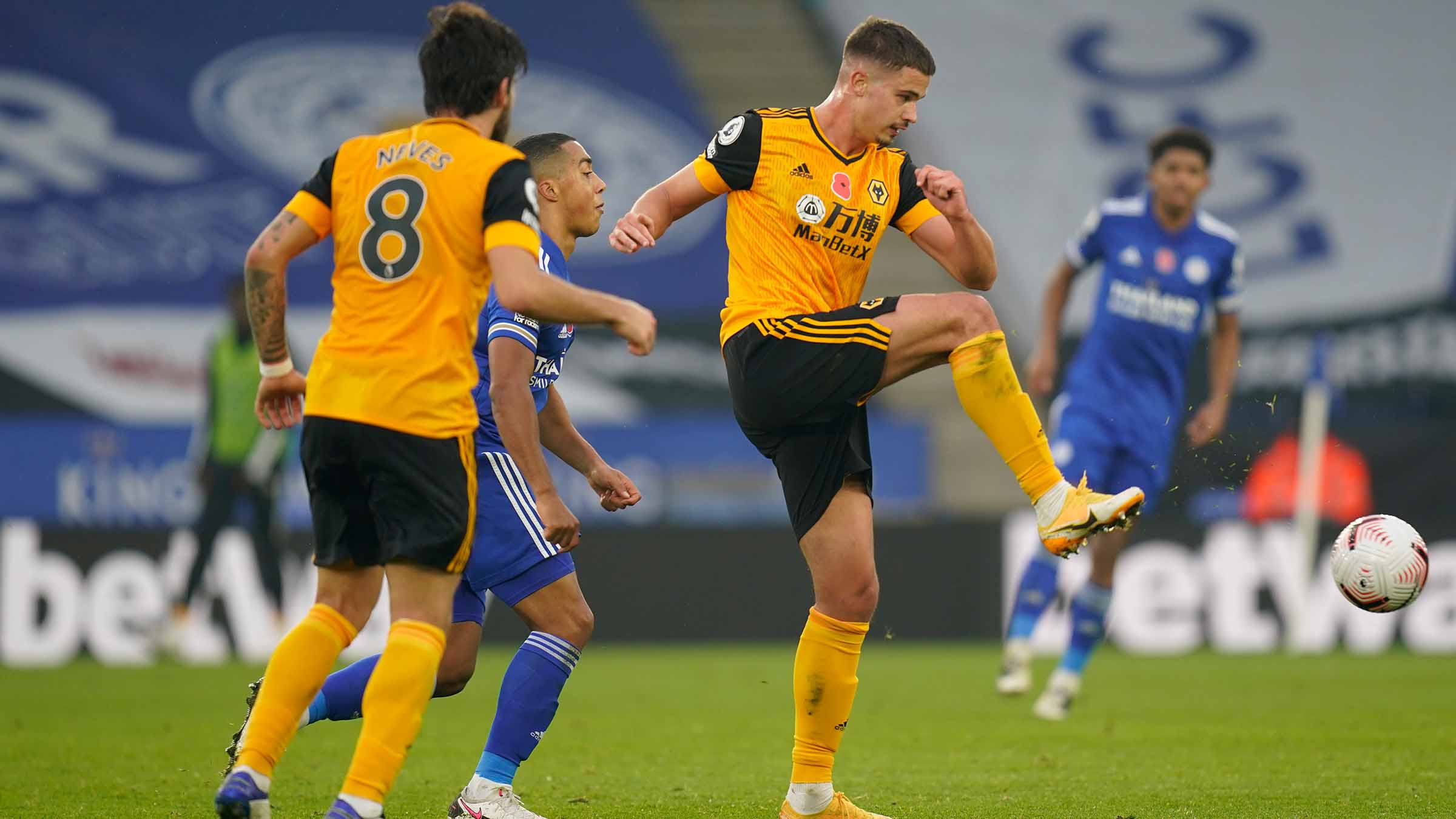 Two years ago, Wolves and Leicester served up a Premier League classic. Wolves 4-3 Leicester in January 2019 had it all – goals, comebacks, a hat-trick and last-minute winner. Diogo Jota’s stunning hat-trick, particularly the dramatic third which sealed the win, is how the game is remembered at Molineux, but the Foxes played their part too, twice coming from behind to draw level. However, since then, while the drama has remained in large parts, the final scores haven’t reflected that.

In the three meetings between the two since, just one goal has been scored – that Vardy’s decisive penalty at the King Power Stadium earlier this season. Last season both contests finished goalless, although Wolves felt aggrieved when VAR denied them winners in both games. Can this fixture make up for recent meetings and serve us up a classic on Sunday?

Flexibility is required in the Premier League now more than ever, with a heavy schedule and unfamiliar circumstances, and on Tuesday night, Wolves’ game showed the need to be adaptable at the drop of a hat. Approaching the break, a goal behind and with Arsenal the better side, Nuno admitted to having his team talk planned, before the contest changed in an instant. Daniel Podence and Jose combined, before the latter was brought down in the area. 30 seconds later, Wolves were level with a man advantage.

As Nuno heads into another exciting Premier League clash with the Foxes, he admits “you cannot predict anything” and that the job of the team is to “find solutions for what’s happening inside of the game.” So, the head coach will have his group prepared for anything come 2pm on Sunday.

“Two minutes before, we had an idea of a team talk, and then all of a sudden, it changes. It can go the other way. Arsenal would have had something prepared in their own minds and they had to change. We were drawing, we had one man more on the pitch, our solutions are going to be different, so that was immediately what we think, what to do now? Let’s react and get the best info for the players for them for the second-half."

Tuesday’s win stopped the rot for Wolves and now Sunday provides an opportunity to build some momentum. So far this term, Wolves have only followed one victory up with another instantly, when success over Fulham preceded a 1-0 win at Leeds United. But now, back-to-back victories will be the aim – a feat Nuno’s side achieved six times in the Premier League last season. In contrast, the Foxes have achieved consecutive wins on seven occasions and, following victory at Fulham in midweek, number seven is on offer.

On the topic in his pre-match press conference, Nuno said: “Of course, the confidence and the mood is better, the approach of the game was better. But the beginning of the game shows us that we have to compete better in many circumstances. So, this is what we’ll try on Sunday.”