5 things to know | Chelsea vs Wolves

Wolves head to Stamford Bridge on Wednesday evening to face a Chelsea side who are starting life without Frank Lampard in their dugout after the Blues boss was relieved of his duties on Monday, but here are five things to know ahead of the latest Premier League match-up.

1. A MONTH IS A LONG TIME IN FOOTBALL

You don’t have to go back far to remember the last time the two sides faced each other in the reverse fixture at Molineux, as Wolves fought back from a goal down in the December clash to earn all three points, thanks to goals from Daniel Podence and Pedro Neto. But a lot has happened for both the old gold and Chelsea in the proceeding 41 days.

Wolves have played six Premier League matches in that time and, after sitting in the top half of the table, have picked up just two points, against Tottenham Hotspur and Brighton & Hove Albion – this is Wolves’ joint-longest winless league run under Nuno Espirito Santo, matching the six games it took to pick up a win at the start of the 2019/20 season, and a barren period during November 2018, while the only victories for the men from Molineux since the turn of the new year have come in the FA Cup.

2. THE CATALYST FOR CHANGE

Chelsea’s loss to Wolves back in December has been considered by many to be the start of the downward spiral for former manager Lampard. Despite the Blues having picked up two wins from their subsequent six top-flight matches, defeats to fellow ‘big six’ sides Arsenal and Manchester City as well as a 2-0 loss to European rivals Leicester City last weekend followed, and their FA Cup wins against Morecambe and Luton Town were not enough to save the club’s legendary midfielder from the axe.

According to reports, owner Roman Abramovich is set to welcome former Paris Saint-Germain and Borussia Dortmund boss Thomas Tuchel to the capital in the coming days, but whether the German will be appointed in time to take charge at Molineux on Wednesday night remains to be seen. 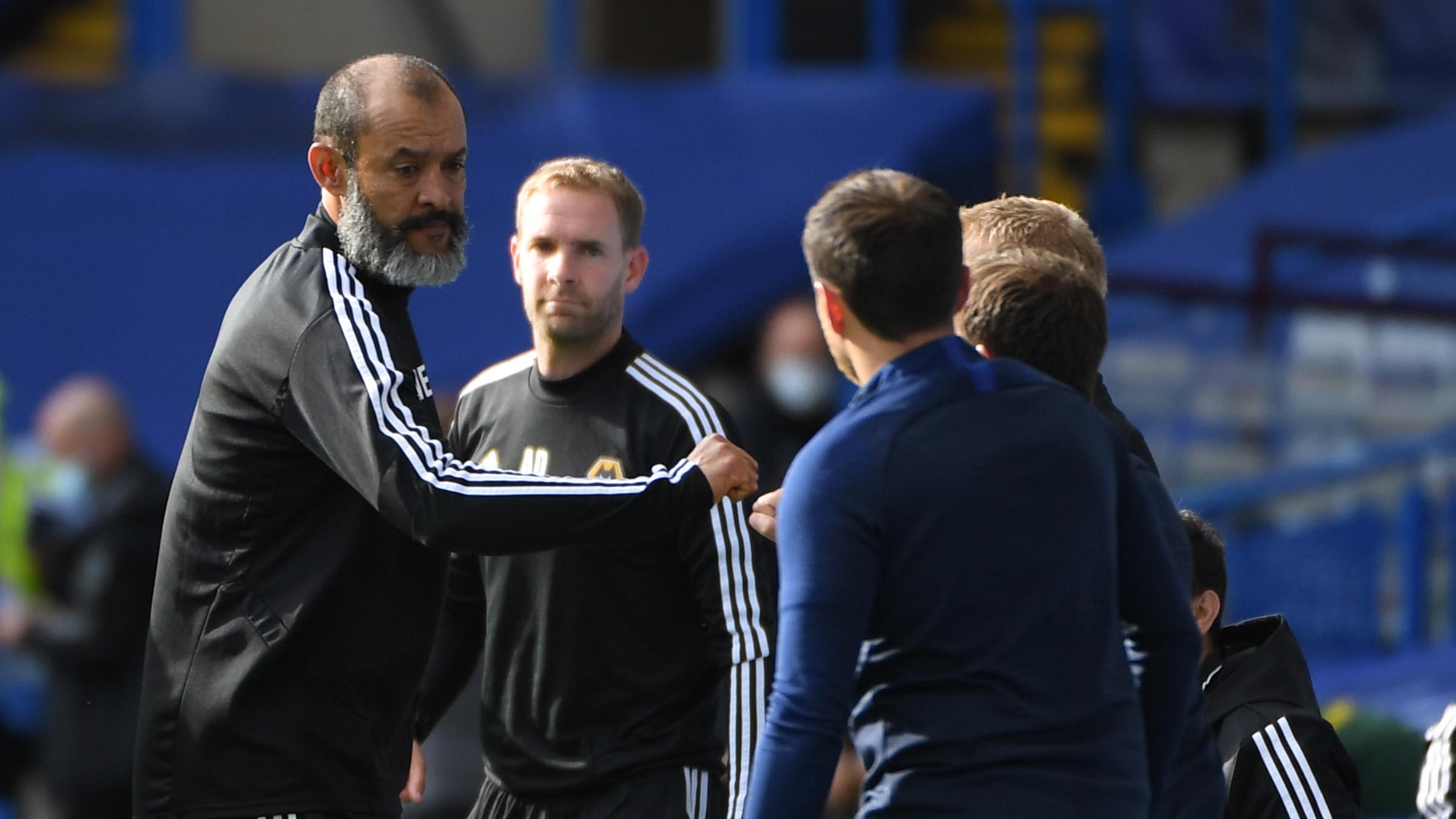 Although Wolves came out on top when the teams last met, Nuno’s men will have to break the habit of a lifetime if they were to pick up three points at Stamford Bridge. The home of the Blues has not been the kindest of venues for Wolves over the years, with all three of the gold and black’s top-flight wins over Chelsea having come at Molineux.

Wednesday evening’s hosts have won five of the six Premier League meetings in southwest London, but it was under the Portuguese boss that Wolves came their closest to snatching all three points back in March 2019. Having taken the lead through Raul Jimenez early in the second-half, it looked as if the old gold were to hold on for their first win at the Bridge since a Division Two tie all the way back in 1979, and first top-flight victory since 1974. But it wasn’t to be, as Eden Hazard struck in added time to steal a point for Chelsea.

With Raul Jimenez on the road to recovery following the collision which caused the forward a fractured skull, and Fabio Silva, who got his first Premier League goal from open play last weekend, still developing, Wolves brought reinforcements into the ranks on Saturday with the loan signing of Brazilian striker Willian Jose from Real Sociedad. The attacker has been firing in the goals for the La Liga outfit over the past four years, and supporters of the gold and black will be hoping he can continue that form when he arrives in Wolverhampton.

However, in Tuesday afternoon’s press conference, the head coach acknowledged that Jose will not be available for his squad against Chelsea, due to the new Brexit regulations on work permits delaying his arrival into the UK. Meaning Wolves fans will have to wait a few more days, at least, until they can see their new number 12 in action.

Until then, test your knowledge on Wolves' latest signing in our Willian Jose quiz!

What to expect from @willianjose19?

Let the man himself explain...

Whoever is in the manager’s hot seat for Chelsea this week will only have one injury decision to make in N’Golo Kante, who is still working his way back to fitness from a hamstring problem and will be unavailable for the Blues, who will likely being Edouard Mendy, Thiago Silva and Ben Chilwell back into their starting XI having been rested for the visit of Luton in the cup on Sunday.

On the other side, Nuno has tough decisions to make if he is to bring an end to Wolves’ winless run. Having persisted with a four-man defence for the last three Premier League matches in which Wolves have picked up just a single point, the head coach reverted to the tried and tested back five in the FA Cup win over Chorley, as the team kept just their second clean sheet in 12 games. With Willy Boly back from injury, but Marcal, Podence and Jonny still on the sidelines, it is yet to be seen as to whether Nuno will stick or twist with his system.