Having had to go 100 days without football, Wolves were back with a bang as Raul Jimenez and a Pedro Neto stunner secured the three points against West Ham United. Here are five things we spotted in the first game back since the covid-19 pandemic struck.

Football’s back, but not as we knew it. No supporters in the ground, players and staff having to social distance on the sidelines, a completely new protocol for everyone to adhere to inside the stadium, and an almost pre-season feel to games as players begin to get their match fitness up to standards. There were also differences in the pre-match routine and players' shirts at the game, the Black Lives Matter movement was supported with a patch on the shirt sleeves,each name on the backs of the tops were also changed to 'Black Lives Matter', and all players knelt before kick-off in poignant scenes. The NHS was also celebrated for the frontline workers who have been giving their all in the fight against coronvairus with a patch on the front of the shirts, while a minutes silence was also held ahead of the match for those who have lost their lives from Covid-19 during the pandemic.

But despite all these differences to the first Premier League matchday for Wolves since 7th March, Nuno Espirito Santo and his men approached the first game back with the utmost professionalism. Although the first-half was played in a similar tempo to what we saw back at Molineux in July as Wolves played their opening competitive match of 2019/20 in their return to European competition against Crusaders – something that you would expect with the players not experiencing a ‘proper’ pre-season after three months away – it was still a disciplined and organised first outing. But then, in the second-half, Wolves introduced Pedro Neto and Adama Traore to an already tiring Hammers, and the pair ran riot to help their side earn the points, in another tactical masterclass from Wolves’ special one. 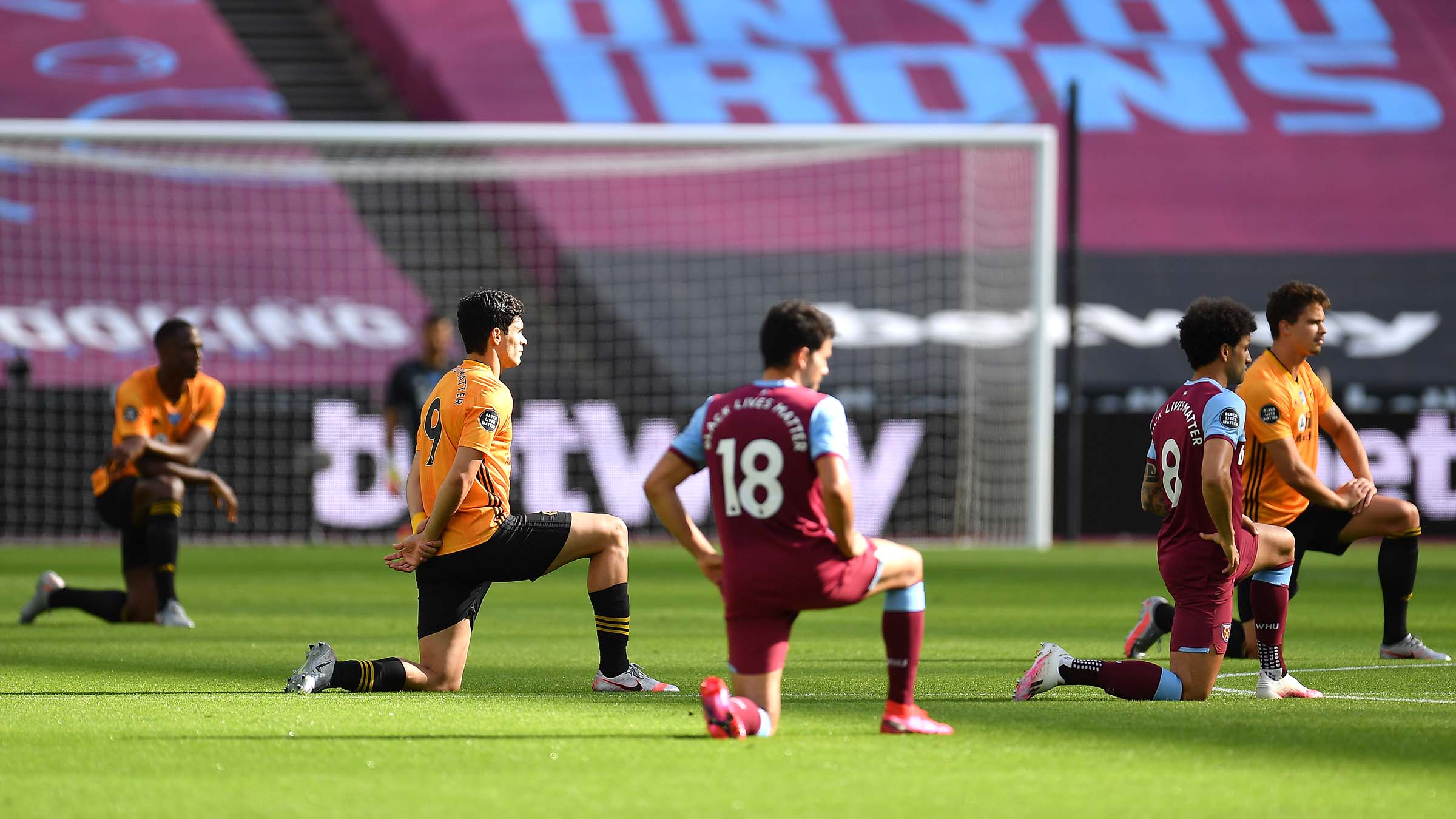 2. IMPACT OFF THE BENCH

The introduction of Neto and Traore allowed Wolves to switch from the reliable 3-5-2 formation, which had helped the visitors dominate possession for the opening 60 minutes at the London Stadium, to a more attack-minded 3-4-3 and boy did it pay off. Coming out on top of their opponents in almost every stat, it was an impressive afternoon for Nuno’s boys. But the switch in formation, coupled with the debilitating pace of Traore, left the Hammers shell-shocked. Following the match, Neto admitted that he was told by the coaching staff to just run and the result would come.

Pedro Neto (plus a few unexpected guests) jumps on the #WolvesLive Zoom call to give his off-the-pitch reaction to today's win!

3. FIRING AT BOTH ENDS

It wasn’t just in attack where Wolves were solid on Saturday, but at the back as well. With no supporters in the ground, anyone within five miles of east London could probably have heard captain Conor Coady barking out his orders, while Willy Boly was a brick wall in defence. Almost every cross that was lifted into the Wolves box seemed to be headed clear by the domineering Frenchman. The stability at the back with Boly in the side was demonstrated once more on Saturday, as Wolves recorded their fifth clean sheet in their last six Premier League matches – which just happen to coincide with the right-sided centre back returning from his long injury lay-off.

You can take your pick of the records Nuno’s side broke on Saturday afternoon; Wolves registering consecutive away league wins at West Ham for the first time, unbeaten in the last 10 Premier League matches in London, Jimenez and Traore continuing their league-leading goalscoring partnership, with the duo now combining for nine goals, or Nuno extending winning run against West Ham to four matches – his best 100 per cent record against any league opponent. But two of the big records broken this weekend were by Raul Jimenez as he became the first Mexican and the first Wolves player to score 14 goals in a single Premier League season. His header from Traore’s cross to put Wolves ahead at the London Stadium saw him overtake Javier Hernandez’s record of 13, which he set while at Manchester United in 2010/11, to become his country’s leading scorer in the English top-flight. The 13-goal mark was also Wolves’ greatest tally in a single Premier League season – which Jimenez happened to set himself in the previous campaign – and you wouldn’t bet against him to extend that record in the remaining eight matches. 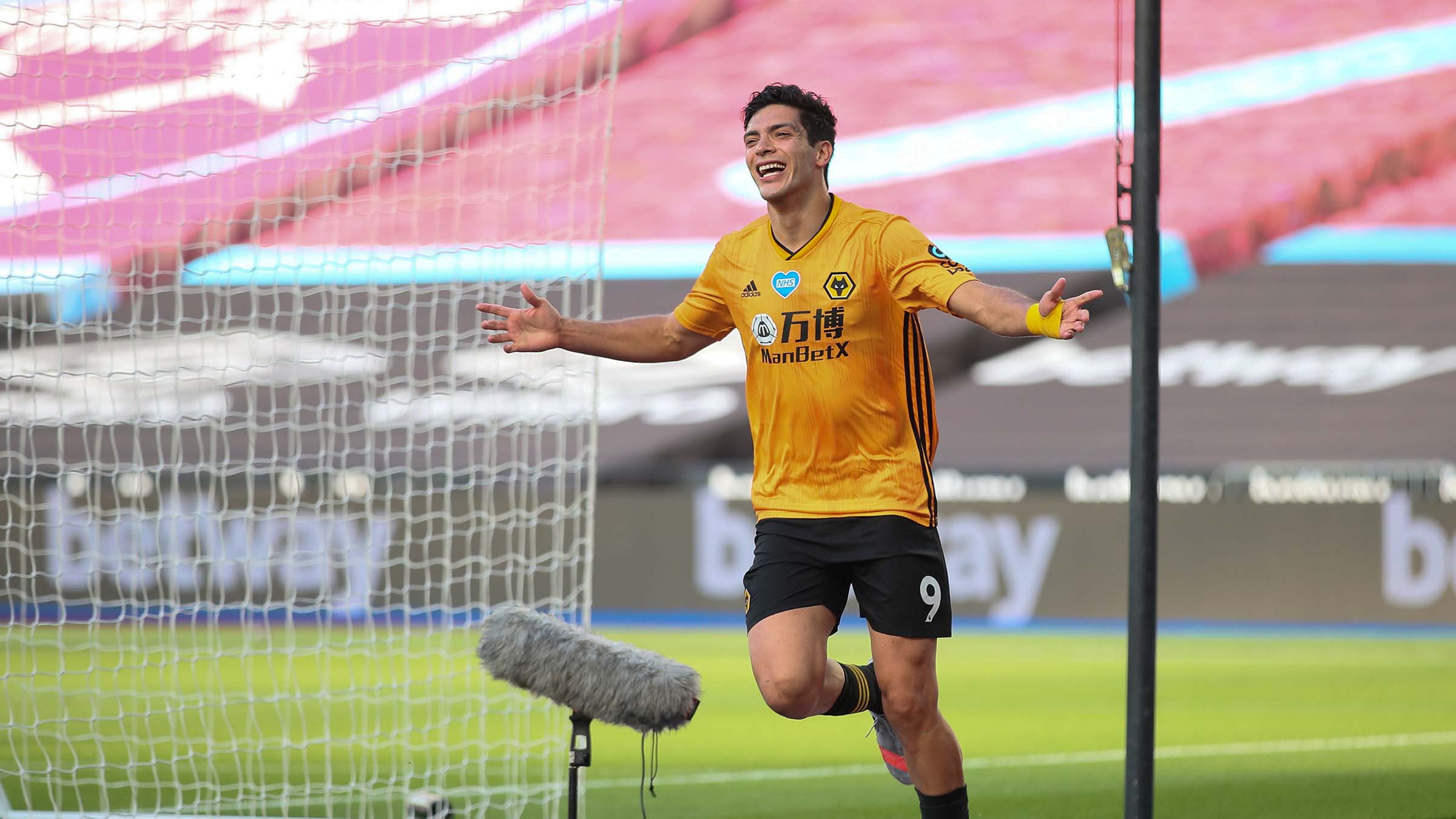 5. A GREAT WEEKEND FOR THE OLD GOLD

Despite Nuno and the players maintaining their game-by-game mantra, supporters would have had their eyes fixed to the multitude of matches which have taken place in the last few days as they eye up a place in the Premier League’s top four. With the exception of Chelsea’s win over Aston Villa, all of Wolves’ rivals for a possible spot in the Champions League (Leicester City, Man United, Sheffield United, Tottenham Hotspur, Arsenal and, to some extent, Everton) all dropped points. Now, focus will switch to a pair of matches in the Midlands taking place this week, as Wolves return to Molineux on Wednesday evening with the visit of Bournemouth before a trip to Birmingham and a derby with Aston Villa on Saturday.