Wolves vs Espanyol | 5 things to know

A place in the last 16 of the Europa League is at stake for either Wolves or RCD Espanyol and both sides will be looking to take a step closer to the latter stages of the competition with victory at Molineux on Thursday evening. Here are five things to know ahead of tonight’s clash.

1. A FIRST FOR BOTH CLUBS

Both Wolves and Espanyol have reached the knockout stages of European competition before, but Thursday night will be the first time the two teams have ever met. Wolves have only ever had one European meeting with Spanish opponents before facing Espanyol, with that game against their opponents’ city rivals in the 1959/60 European Cup quarter-final, where a Stan Cullis-led gold and black side were eliminated by Barcelona 9-2 on aggregate (4-0 away, 5-2 at home). Although tonight marks Espanyol’s first meeting with Wolves, the Catalan outfit’s only previous European game against English opponents was also in the West Midlands. This came in the second round of the 1961/62 Inter-Cities Fairs Cup, where Espanyol eliminated Birmingham City 5-3 on aggregate (0-1 away, 5-2 at home). But a lot has changed for both clubs in the last 60 years, and Wolves will be full of confidence following their 4-0 drubbing of Besiktas the last time they played a Europa League tie at Molineux.

2. BACK UNDER THE LIGHTS

That Besiktas win was the last in a run which stretched back all the way to October 1973 in which Wolves have won all but one of their previous games at Molineux in all European competitions. At the stadium which was the birthplace of European football in the 1950s, the only blot on Wolves’ sheets is the narrow 1-0 defeat to Braga on matchday one of this season’s group stages. Although currently sat bottom of the La Liga table, Espanyol will hold no fear as they arrive at Molineux this evening, especially in their upturn of form seeing them earn draws against Barcelona and Sevilla in recent weeks. Abelardo Fernandez’s side are also unbeaten om their travels in Europe this season, with wins against Starnana and FC Luzern in the qualifiers followed up by victories over Ludogorets and CSKA Moscow in the group stages.

Espanyol’s improving form has coincided with the goalscoring exploits of Raul de Tomas. The 25-year-old Spanish striker has scored in every game he has featured in for the side since moving to Espanyol in the January transfer window. And it’s not just the name which strikes similarities to that of Wolves’ own centre-forward Jimenez, but de Tomas also arrived as a club record signing from Benfica – the team which tonight’s hosts signed their Mexican number nine from in 2019. Wolves will have been given a boost knowing that Espanyol’s Raul has been ruled out of Thursday night’s clash and has not travelled with his side to Wolverhampton. While the hosts will be hoping Jimenez can add to his impressive European goal tally, with the Mexican being involved in 12 goals in his 11 games in European competition for Wolves this season – including qualifiers – scoring nine and assisting three. 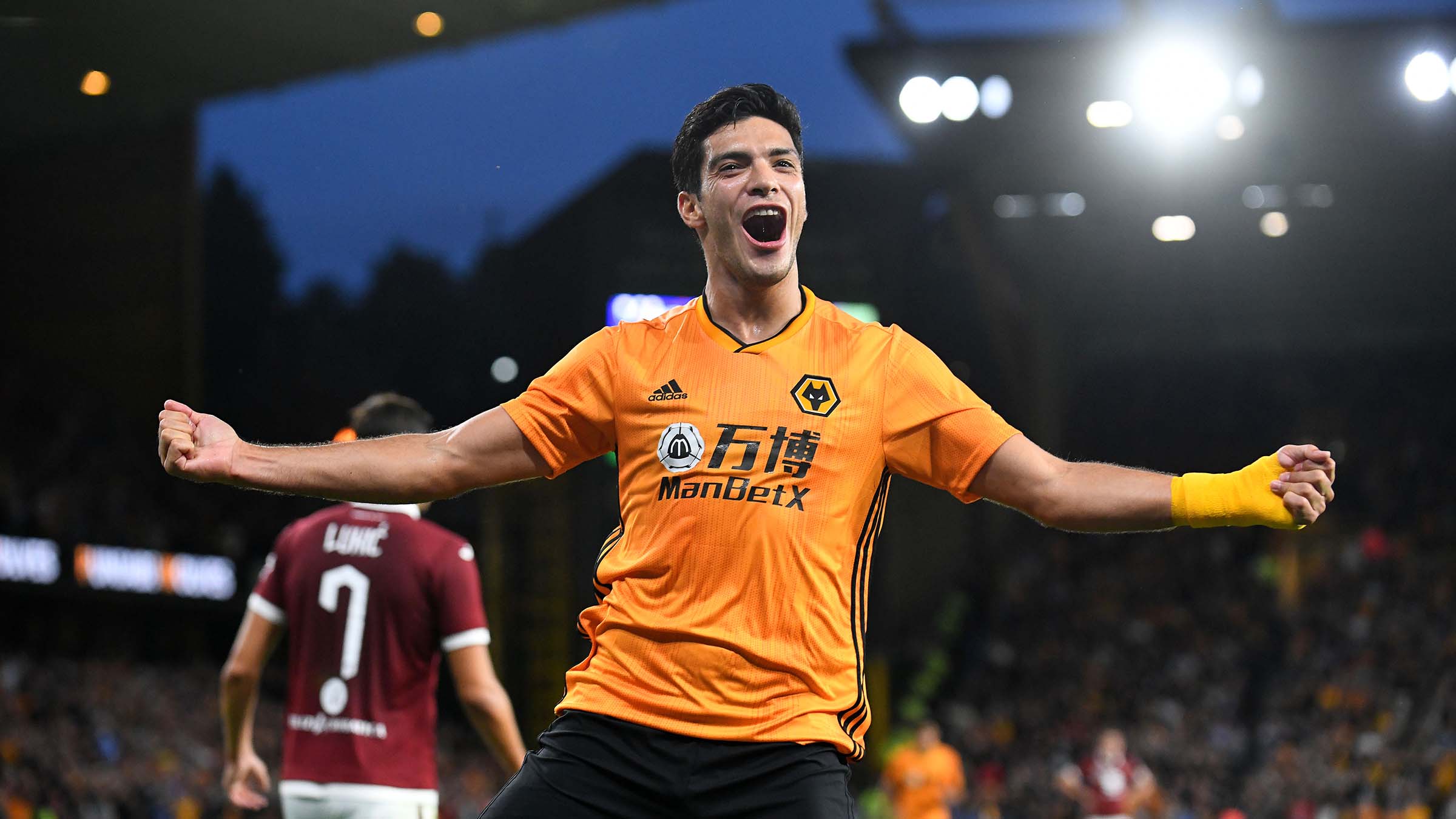 Ask either of the two teams if the Europa League final – this year taking place at Stadion Energa Gdansk, home of Lechia Gdansk, in May – is in their minds and they will quickly shoot you down. But looking back on history and the signs are bright for both clubs. The last time Espanyol were in the knockout stages of a major European competition they went all the way to the final. The 2006/07 Espanyol offering took part in the UEFA Cup that season, and eventually lost on penalties against fellow Spanish side Sevilla. Likewise, the last time Wolves reached this stage of a European competition, they also made it all the way to the final, and the same as Espanyol, lost to another side from their own country. However, it was much longer ago for Wolves, who went all the way to the final of the 1972 UEFA Cup final but eventually lost out on aggregate (as the final was a two-legged affair back then) to Tottenham Hotspur.

Wolves have already experienced great European nights, both at Molineux and on the road across the continent, this season. The cities of Wolverhampton, Belfast, Yerevan, Turin, Istanbul, Bratislava and Braga have all hosted Nuno Espirito Santo’s side this season, and captain Conor Coady has loved every second of the journey. 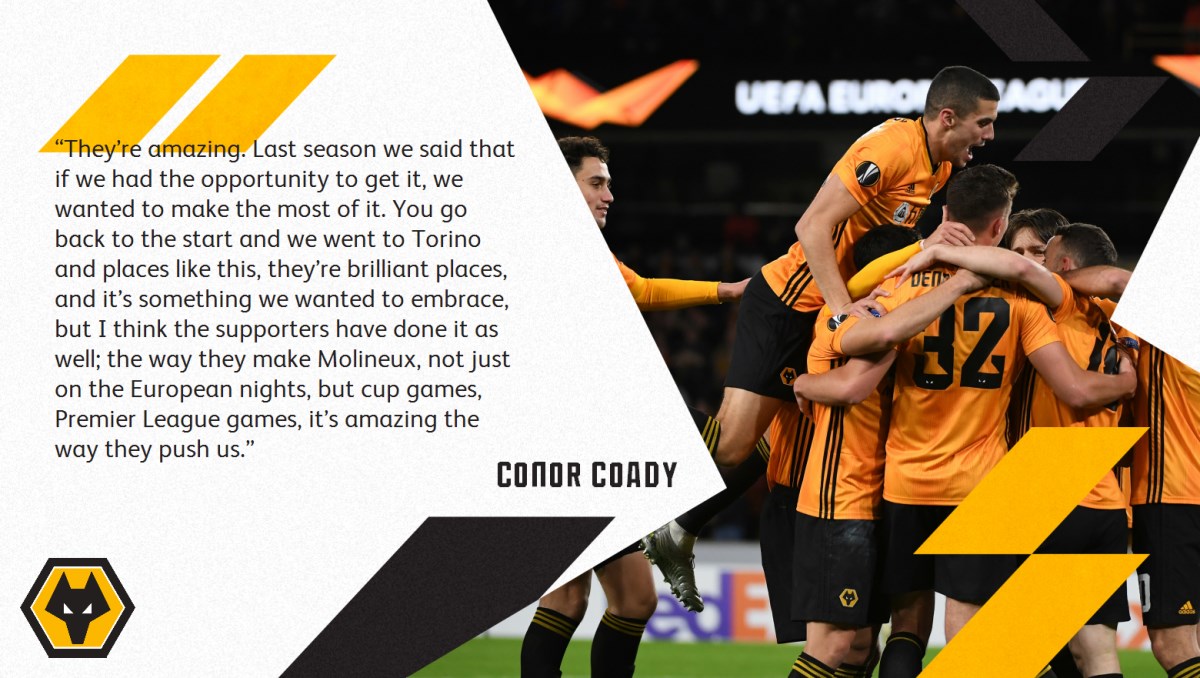