Despite not being at their free-flowing best, Wolves came away with all three points from Carrow Road on Saturday thanks to a 2-1 victory over Norwich City. Here are five things we spotted from the final Premier League clash before Christmas.

Described as "not very good" by Nuno Espirito Santo after the full-time whistle, Wolves’ first-half performance against Norwich left much to be desired for the 2,632 travelling gold and black supporters on Saturday afternoon. The Canaries dominated much of the opening 45 minutes, and deservedly took the lead when Todd Cantwell fired home from the middle of the Wolves box after pouncing on a loose ball. But Wolves hit back after the break through Romain Saiss’ powerful header from a Joao Moutinho cross; the Portuguese legend’s eighth Premier League assist from a corner since his arrival in the Black Country – two more than any other player in the top-flight. With nine minutes left on the clock, Raul Jimenez – who has been directly involved in 12 of Wolves’ 26 Premier League goals this season – snatched victory for the visitors when he fired in a Matt Doherty effort which had rebounded off Tim Krul. 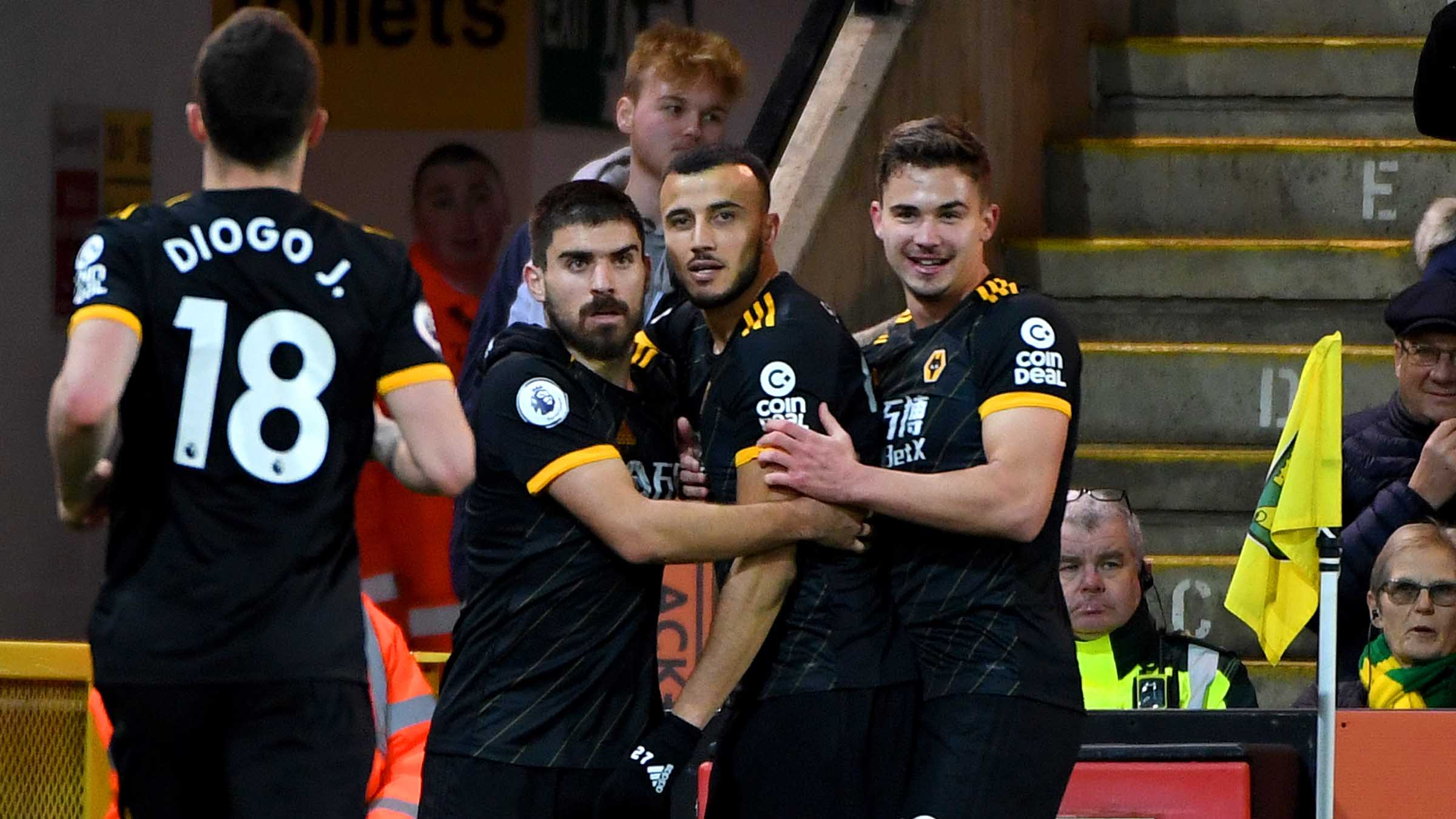 Norwich boss Daniel Farke felt his side were unlucky not to have taken all three points from the match, which was the same feeling many in the Wolves camp were suffering from after last weekend’s defeat to Tottenham Hotspur at Molineux. In last Sunday’s 2-1 loss to Spurs, Wolves dominated possession and played some of the best football the side have produced under Nuno, yet came away with nothing. Saturday was the complete opposite. Despite an under-par performance from Wolves, the players were able to take their chances when it mattered, earning the club’s second ever victory at Carrow Road in the top-flight and the first since February 1980 to secure a sixth-place spot in the Premier League table come Christmas Day.

One of the only Wolves players to come off the pitch at half-time against Norwich with his head held high was Rui Patricio. The Portuguese number one made several important saves in the first-half to keep the deficit at one goal, giving Wolves the platform to go on and win the game. If it wasn’t for Patricio’s pair of one-on-one stops to deny Teemu Pukki, as well as tipping an Alexander Tetty long-range effort onto the post, Norwich could have found themselves home and dry by the break. 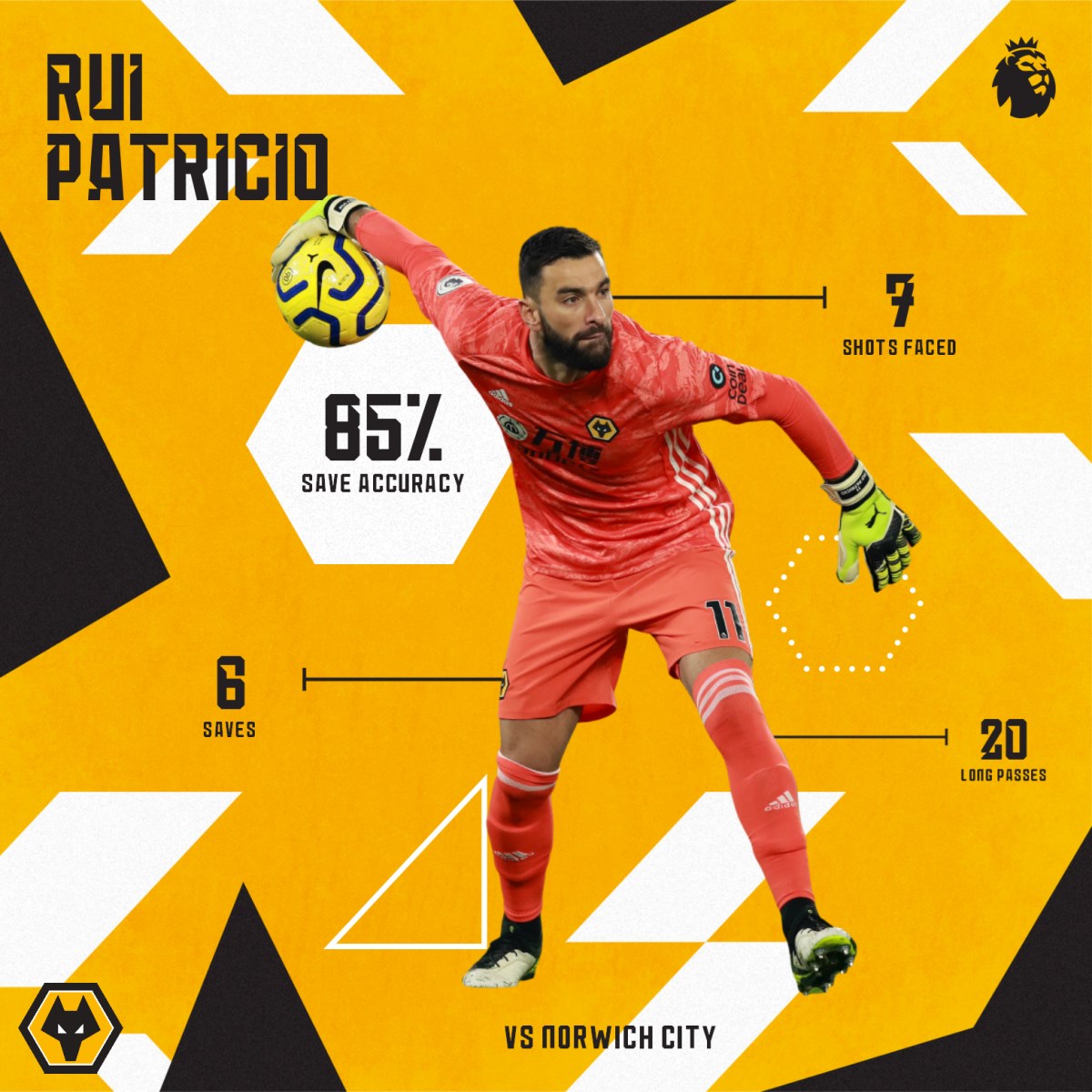 Although Wolves’ 11-game unbeaten run ended with last weekend’s defeat to Spurs, Nuno’s side are still having a season to remember in the top-flight, with a sixth-place Christmas Day position being the club’s best in the top-flight since 1979/80. John Barnwell’s side then went on to end that season in the same standing, as well as winning the 1980 League Cup final. Wolves’ position in the table has been helped by their excellent away form. Losing just once away from home this season, Nuno’s men last tasted defeat on their travels 113 days ago, with the 3-2 loss at Goodison Park against Everton in their second away match of the season.

Following Saturday’s victory, Wolves entered the busy festive period where they will face four games in nine days starting on Friday and the visit of Manchester City to Molineux. Wolves then go on the road to Anfield just 45 hours later before a New Year’s Day tie with Watford. Nuno’s side then return to Molineux on Saturday 4th January for their first home match of 2020 by hosting Manchester United in the third round of the FA Cup – a replay of last season’s quarter final. But goalscorer Raul Jimenez said his team-mates are well prepared for the upcoming slate of quick-fire fixtures.