Stunning goals, a plethora of awards and a Championship winners medal had come before. Now we look back at the ten key moments which have shaped the Portuguese’s time at Molineux so far.

Although Neves’ arrival at Molineux sparked excitement, few could envisage just how successful the midfielder’s first 50 games would be in gold and black. At 20, Neves was a full Portuguese international and played in the Champions League at Porto, so arrived with good pedigree, but would only enhance his reputation from that point. Although the transfer remained undisclosed, the club confirmed Neves was indeed a club record transfer. Having worked under Nuno Espirito Santo at Porto, the deal saw the duo reunited at Molineux. 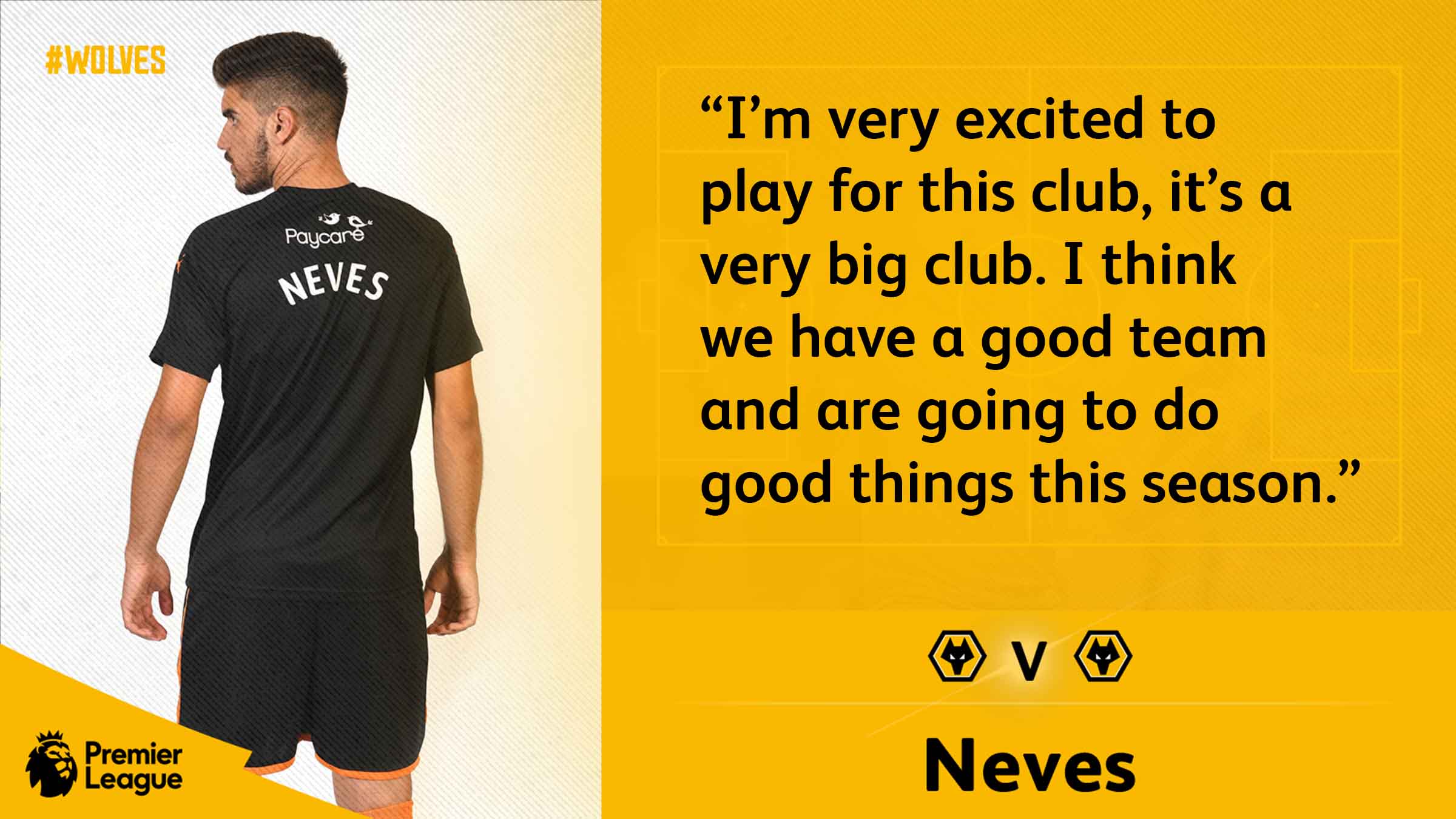 The first glimpse of Neves in competitive action for Wolves came at a lively Molineux for the visit of Middlesbrough on the opening day of what turned out to be a memorable campaign. The midfielder shone on his first outing, spraying passes across the Molineux turf, with Matt Doherty so often the welcome recipient. One of seven debutants, Neves and co recorded a 1-0 victory over much-fancied Boro, to start the Championship campaign on a positive note. His only attempt on goal during the 90 minutes was cleared by the Boro defence but much more was to come.

A typically stunning strike to get him up and running in a Wolves shirt. The KCOM Stadium was the venue, Hull City the opposition. Barry Douglas laid the ball off into the centre of the park and, where most players would keep the ball moving, Neves took a sumptuous touch, glanced up and released a ferocious drive which flew through the air, beyond Allan McGregor. The midfielder was off the mark from 30 yards out after just six minutes and his moment of magic inspired Nuno’s side to a 3-2 victory on the road to make it maximum points from three games.

Brilliant strikes against Sheffield Wednesday and Brentford had only enhanced Neves’ reputation further, setting him up nicely for a promotion battle with Sheffield United for an evening kick-off on home soil. Wolves had returned to winning ways the previous week and entered an electric Molineux in front of the Sky Sports cameras. Just five minutes had passed when Neves latched onto an inviting ball 25 yards from goal and curled a stylish finish into the top corner, via the inside of the post to add to his growing collection of great goals.

Big games require big performances and Neves stepped up when it mattered to put Wolves on the cusp of the Championship title in April. It was top versus second and six points separated Wolves and Cardiff, with the latter holding a game in hand. Past the hour mark, Neves stood over a free-kick 25 yards out and there was almost an air of expectancy. The midfielder produced when it mattered, curling a free-kick over the Cardiff wall and into the top corner to spark scenes of jubilation in the away end. Wolves put one foot in the Premier League that night. 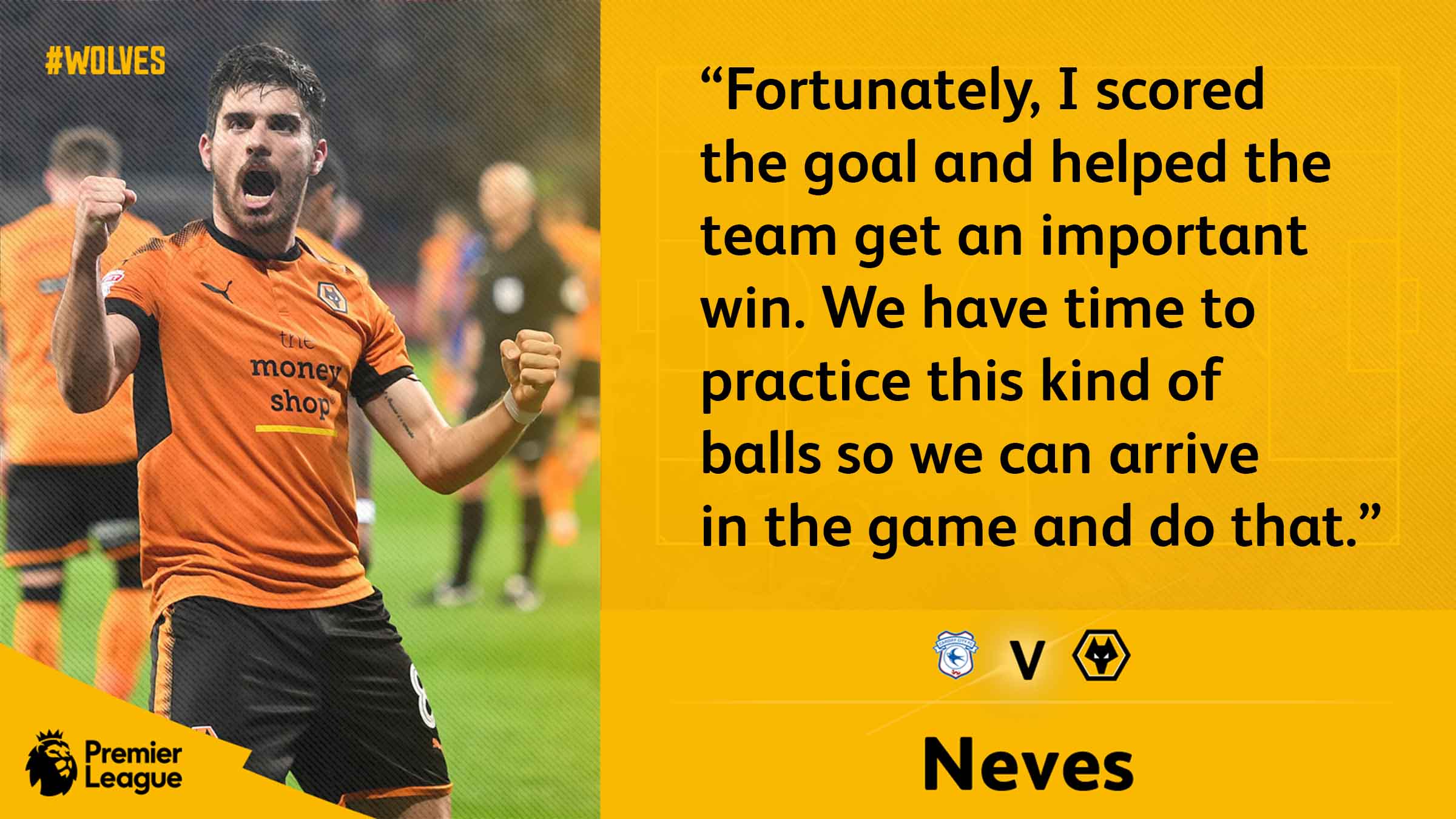 Already on cloud nine following his Cardiff heroics, just five days later Neves eclipsed his strike with the greatest scored in his short but successful career to date. 1-0 up and a Douglas corner was cleared only a far as the Portuguese who was poised 30 yards from goal, just waiting. Following a touch to tee himself up perfectly with the outside of his foot, Neves saw his opportunity and hit the sweetest of volleys which flew through the air, past the desperate arms of Scott Carson, and into the top corner. The South Bank celebrated in disbelief, Neves just kept producing.

Come the End of Season Awards dinner in Telford, Neves unsurprisingly enjoyed a trophy-littered evening. His maiden season in English football had been a remarkable success and the Wolves supporters rewarded him by voting the midfielder their Player of the Season, ahead of Conor Coady and Matt Doherty. Not the fans alone however, Neves was also voted the top player from his fellow peers, while his remarkable strike against Derby unsurprisingly earned him a hat-trick of awards with the Goal of the Season. 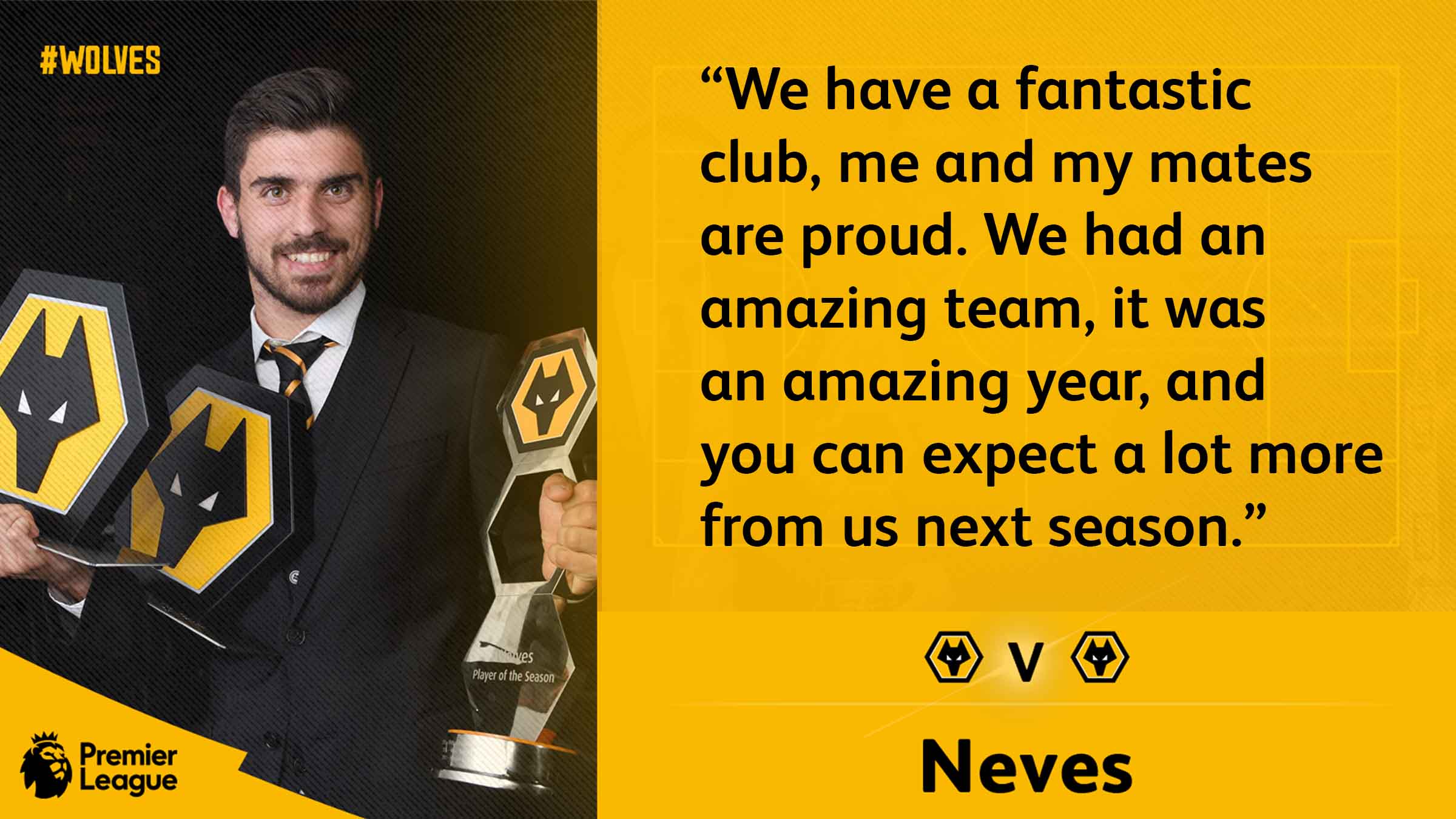 8. TEAM OF THE SEASON

The midfielder’s recognition stretched beyond Wolves, Neves was also named in the Championship Team of the Season, after he took the division by storm. Alongside team mates John Ruddy and Conor Coady, Neves took his place in the EFL’s best 11. Narrowly beaten by Ryan Sessegnon to Championship Player of the Season, but Neves was proud of his efforts across 2017/18, with a Premier League campaign to look forward to. 42 games and six goals, it had been some introduction to English football.

Just 12 months after arriving at Molineux, Neves committed his long-term future to Wolves by signing a new deal in July 2018. The midfielder put pen to paper on a fresh five-year contract, keeping him at Molineux until 2023 after a remarkable first season at the club, which finished with a Championship winning medal.

After taking the Championship by storm, Neves took to the Premier League like a duck to water. 44 minutes into his top-flight debut against Everton, Wolves won a free-kick on the edge of the box. This was the midfielder’s time to shine, a short run up was all it took, and Neves wrapped his foot around the ball, swerving it away from the goal and back in, grazing Jordan Pickford’s fingertips before nestling into the top corner. Molineux erupted, the first goal back in the Premier League and it was another moment of magic from Neves.