Wolves Foundation have reflected on another challenging year for many people in the city, but one where a positive spirit of community and togetherness has shone through.

With restrictions changing throughout the year as a result of the pandemic, and again in recent weeks with the increase in infections due to the Omicron variant, the Foundation has had to regularly adapt in delivering the charity’s projects whilst keeping staff and participants safe.

What has remained unchanged has been the strong desire to support the community in whichever ways possible, with so many Foundation projects enjoying a positive impact on the mental and physical health of the residents of Wolverhampton.

“The pandemic has been with us for nearly two years now, with different restrictions coming and going depending on infection rates, and we know that for many people this has led to so many different challenges and some really difficult times,” said head of Wolves Foundation Will Clowes.

“We are also painfully aware that so many people across Wolverhampton have lost loved ones or seen friends and family members become seriously ill, without being able to access the usual support networks due to the threat of the virus.

“What we have experienced at the Foundation, alongside those extremely difficult times, has been a sense of community and a shared determination to come together and provide help and support where it is possible.

“All of us connected with the Foundation are very proud of the work we have been able to deliver over the last 12 months and the positive impact we have had on the community, despite challenging circumstances.

“There have been many highlights, from launching Feed Our Pack in January which has been supported incredibly by the fans and the city, to the Duke and Duchess of Cambridge visiting one of our inclusion activities at The Way Youth Zone, to the fantastic music video produced by our Head 4 Health participants and, just last month, another inspirational Molineux Sleepout.

“Underpinning all of what you might term those ‘headline’ activities, has been our team of dedicated staff, across health, education and inclusion, delivering to our community, day after day, week after week, with the utmost dedication and professionalism.

“Our mission is to create opportunities and change lives, and I believe we have continued to do this even through such a challenging two years, but only thanks to the help and support of the community which we serve.

“Just getting everyone back into the office over recent months up until recently, and the return to face-to-face delivery for the second part of the year, reminded us all why we are so driven to work for the Foundation and motivated to have a positive influence on the lives of participants of all ages and abilities.

“We know that the pandemic is not over, and there will still be challenges ahead, but hopefully we can look to 2022 with renewed hope and optimism that life will improve and we will continue to work with all our partners across the city to make a difference for the people of Wolverhampton.”

Below, in a look back on 2021, is just one event or project picked out from each month of so many that tool place, reflecting just a flavour of the overall range and diversity of the Foundation’s activities.

The year began with the launch of one of Wolves Foundation’s most ambitious projects to date – Feed Our Pack.  The £500,000 project was launched thanks to investment from the Premier League & PFA Community Fund and then Head Coach Nuno Espirito Santo.  The multi-faceted project centres around several different areas in aiming to help reduce the effects of food poverty caused by the pandemic, namely supporting local foodbanks, delivering holiday activities for local schoolchildren and supplying food parcels.  Feed Our Pack has since diversified into other areas including providing digital support, clothing and toys and presents this Christmas. 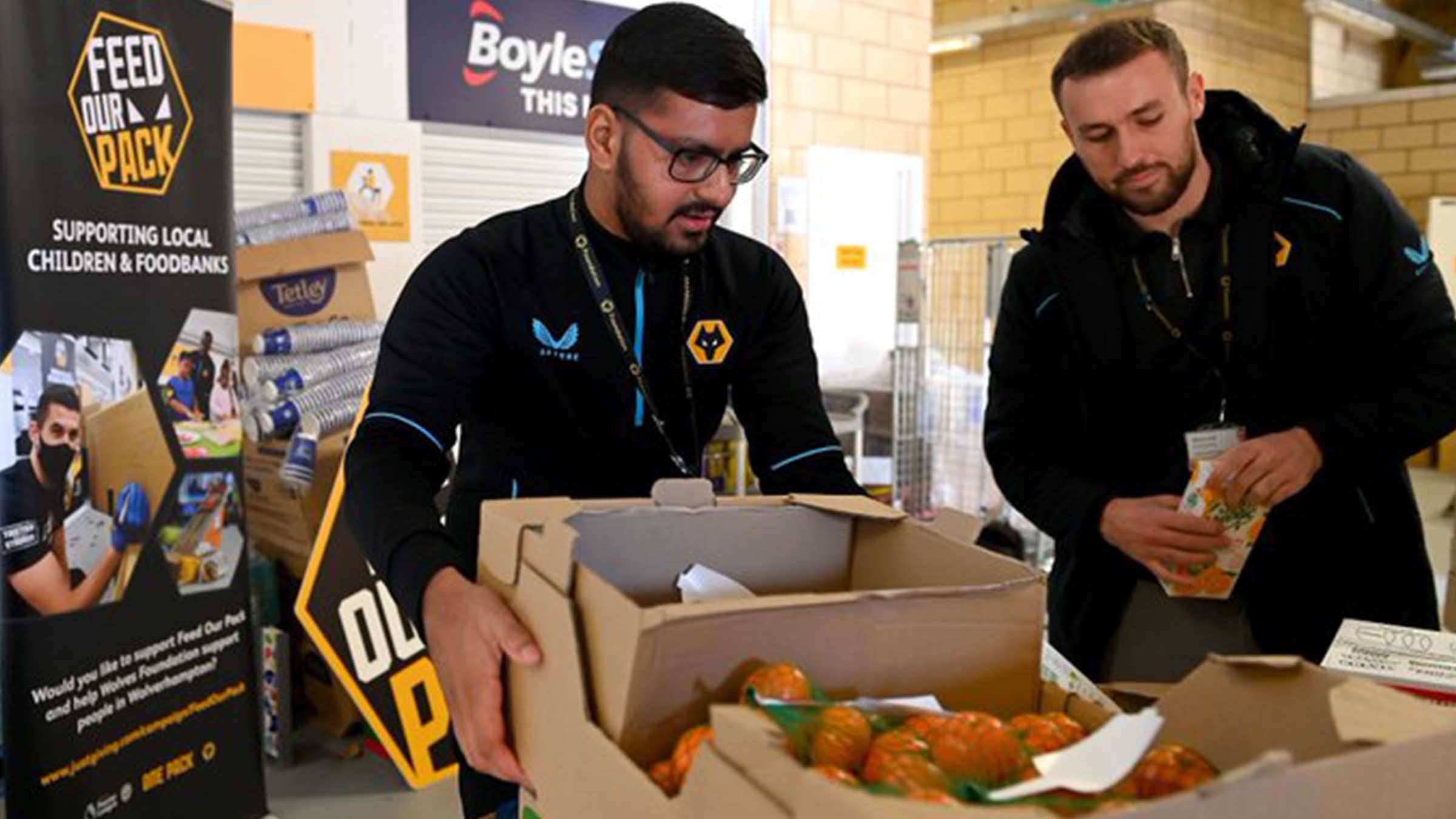 One particularly important part of the Foundation’s work during the lockdown phases of the pandemic was in keeping in touch with elderly and potentially isolated supporters who were missing out on their usual activities. That included the Wolves Elders, a group of fans over the age of 55 who met up weekly either at Molineux or shared various visits and trips. One member Freda, who had lost her husband Alec to a heart attack several years earlier, told us in February how important the Foundation had been in keeping in close contact during the pandemic, including receiving a Christmas delivery of chocolate thanks to club partner Cadbury and a letter from Conor Coady.

One of the fantastic features of Feed Our Pack was the response from the community in raising more funds to add to the original investment, ensuring more and more people can be supported over the initial three years of the project. Over the year over £80,000 was raised by fans through a variety of fundraising.  Ahead of the Feed Our Pack fixture against Liverpool in March, the Wolfpack Howlers band played their second ‘virtual’ gig to support the project, this time at Birmingham’s Millennium Point studio streamed live on Wolves’ official Facebook page. Over £3,500 was raised in addition to the £1,300 from their previous performance.

The hugely successful Premier League Kicks programme helps Wolves Foundation engage with local youngsters working with several partners including West Midlands Police. That relationship with the Police is vital, showing the young people they are there to help them and reduce any element of suspicion and mistrust.  During the Easter holidays, Foundation staff went out on patrol with the Police, improving those relationships and joining them in speaking to young people from across the City to both break down barriers and promote the Kicks sessions.

Another of the Foundation’s flagship projects, run thanks to funding from the Premier League, PFA, City of Wolverhampton Council and Wolverhampton CCG is Head 4 Health. The initiative aims to improve the mental health and wellbeing of men from the local area and encourage them to share their feelings via conversation or in different activities.  It wasn’t quite an FA Cup final song but May saw the release of Head 4 Health’s music video ‘With a Little Help from my Friends’, all recorded and filmed at Newhampton Arts Centre.  Previously, Head 4 Health participants had met Prince William the Duke of Cambridge at the launch of one his projects, and Foundation staff and participants had another chance to do so during May as the Duke and Duchess visited an activity session at The Way Youth Zone. 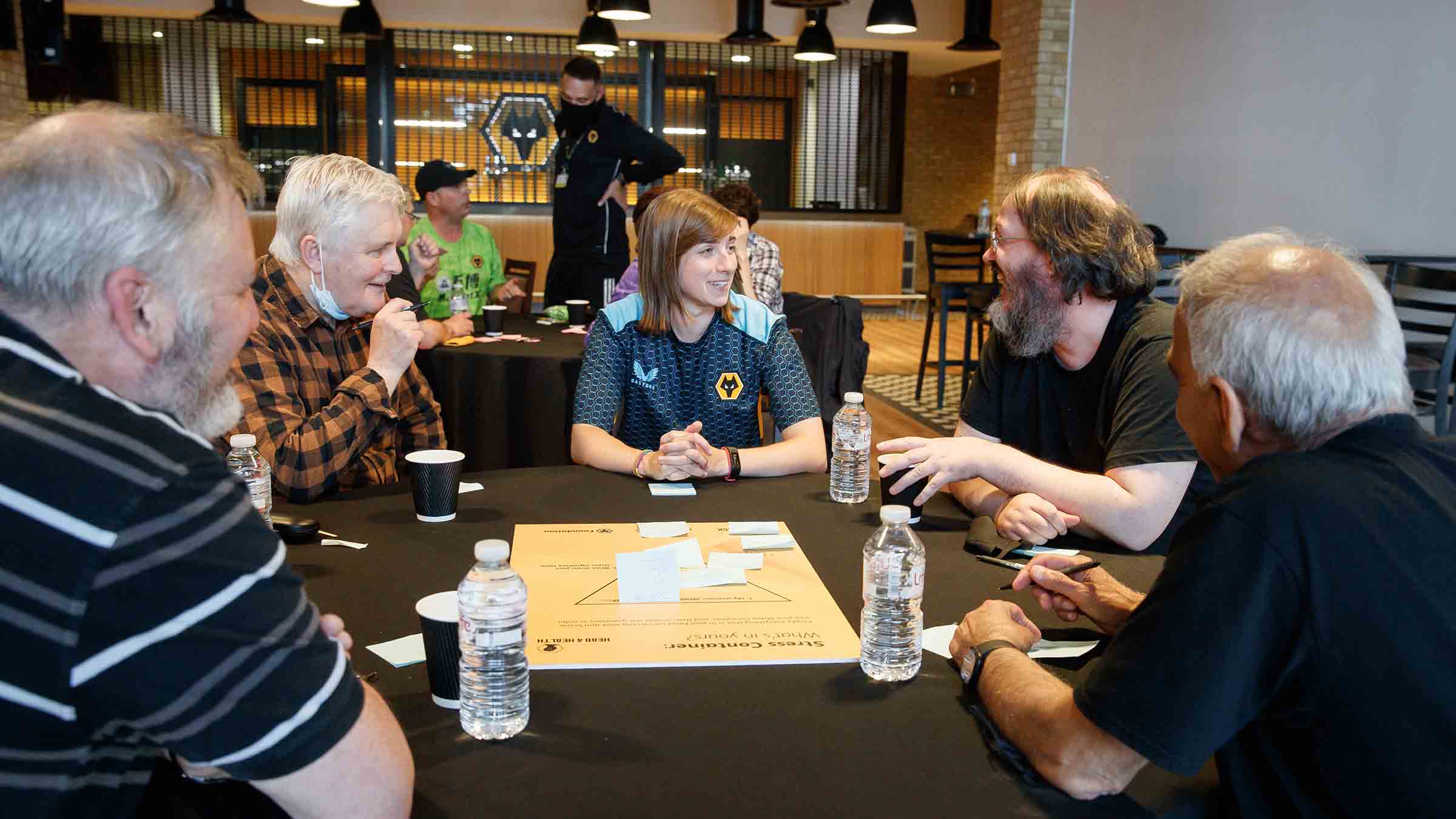 Working with other educational institutions, Wolves Foundation can offer both degree and BTEC courses with the added benefits of providing a wide range of practical experiences to dovetail with the theory and the learning.  And so, when the Foundation were able to return to delivering their ‘Core Sports’ in June, putting on football sessions for children aged from reception up to Year Six, students were also able to continue to develop their coaching skills.  Core Sports sessions offer participants the chance to take part in drills on how to defend like Conor Coady, pass like Ruben Neves or shoot like Raul Jimenez.

As a charity, receiving fundraising to support all areas of the Foundation’s delivery is crucial and, in July, there was good news with the announcement of the Mayor’s chosen charities for his year in office. The Mayor, Councillor Greg Brackenridge, visited a couple of Foundation projects in revealing that Wolves’ official charity would be among the beneficiaries of fundraising over the year. Later in the year local MP Stuart Anderson – whose constituency covers both Molineux and the Compton Park training ground – also supported the Foundation with a fundraising event, completing the daunting Dragon’s Back Race, a six day running challenge up and down the mountainous spine of Wales. 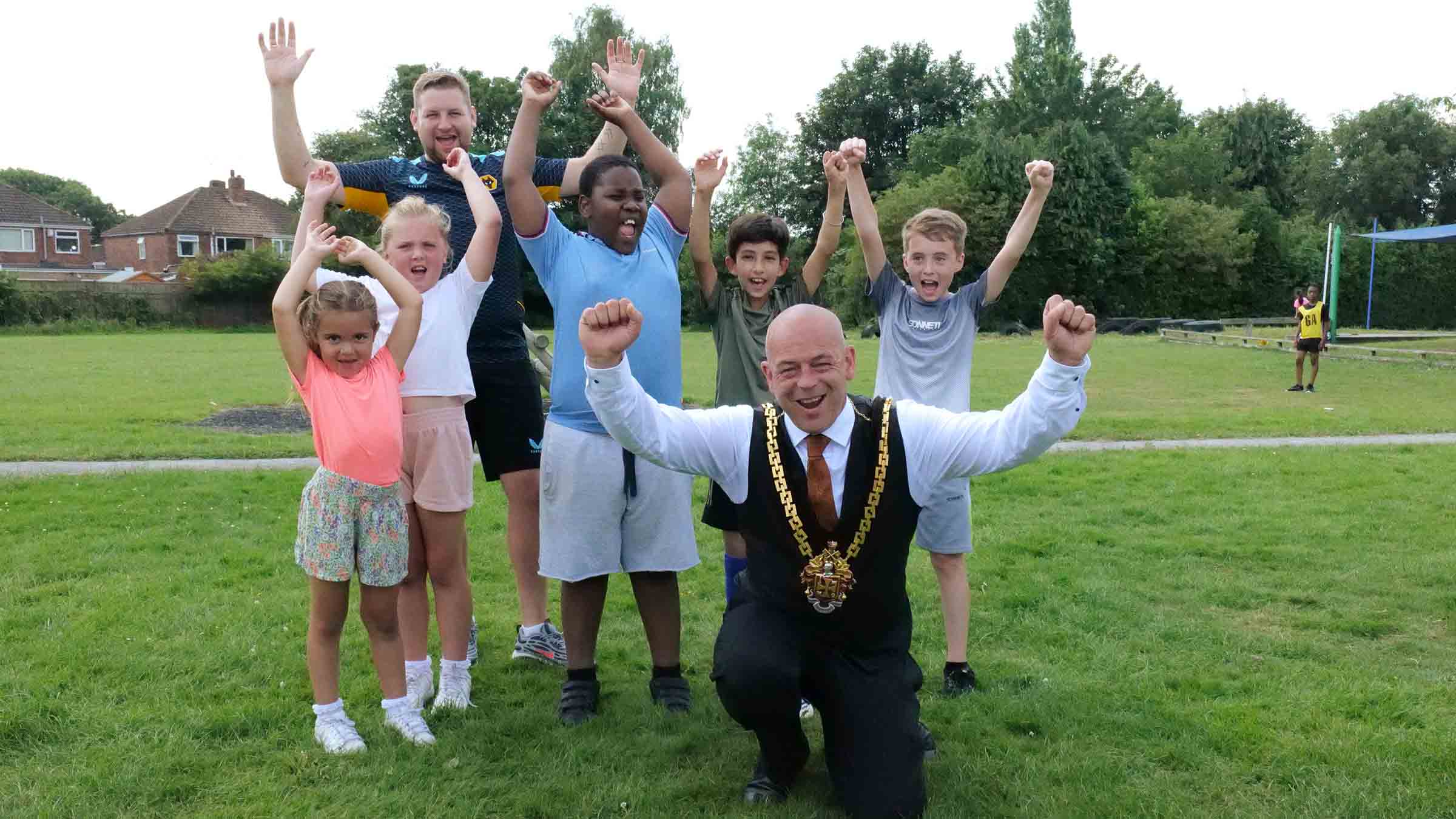 AUGUST
The Rachael Heyhoe Flint award, presented each year to mark outstanding service to the community, was given out in August, to a charity worker who have up her job to preserve the future of an organisation supporting people suffering from homelessness.  Helen Holloway, Admin/Finance manager at the Good Shepherd, received the award from Foundation Senior Manager Lee Smith in a surprise presentation at Molineux. The award is given in tribute to the former Baroness, who played a huge part in the early days of Wolves’ official charity.

The Foundation are now able to maximise the impact of the Feed Our Pack project thanks to a link-up with the His Church charity, which was announced in September.  His Church operates by collecting food, hygiene products, clothing and toys which can no longer be used or sold by distributors, but are still of a high quality and will make a positive difference to people out in the community.  For the Foundation, the link-up will help local foodbanks produce and deliver an additional 60,000 meals a year, a 30% increase in their provision for the local community. 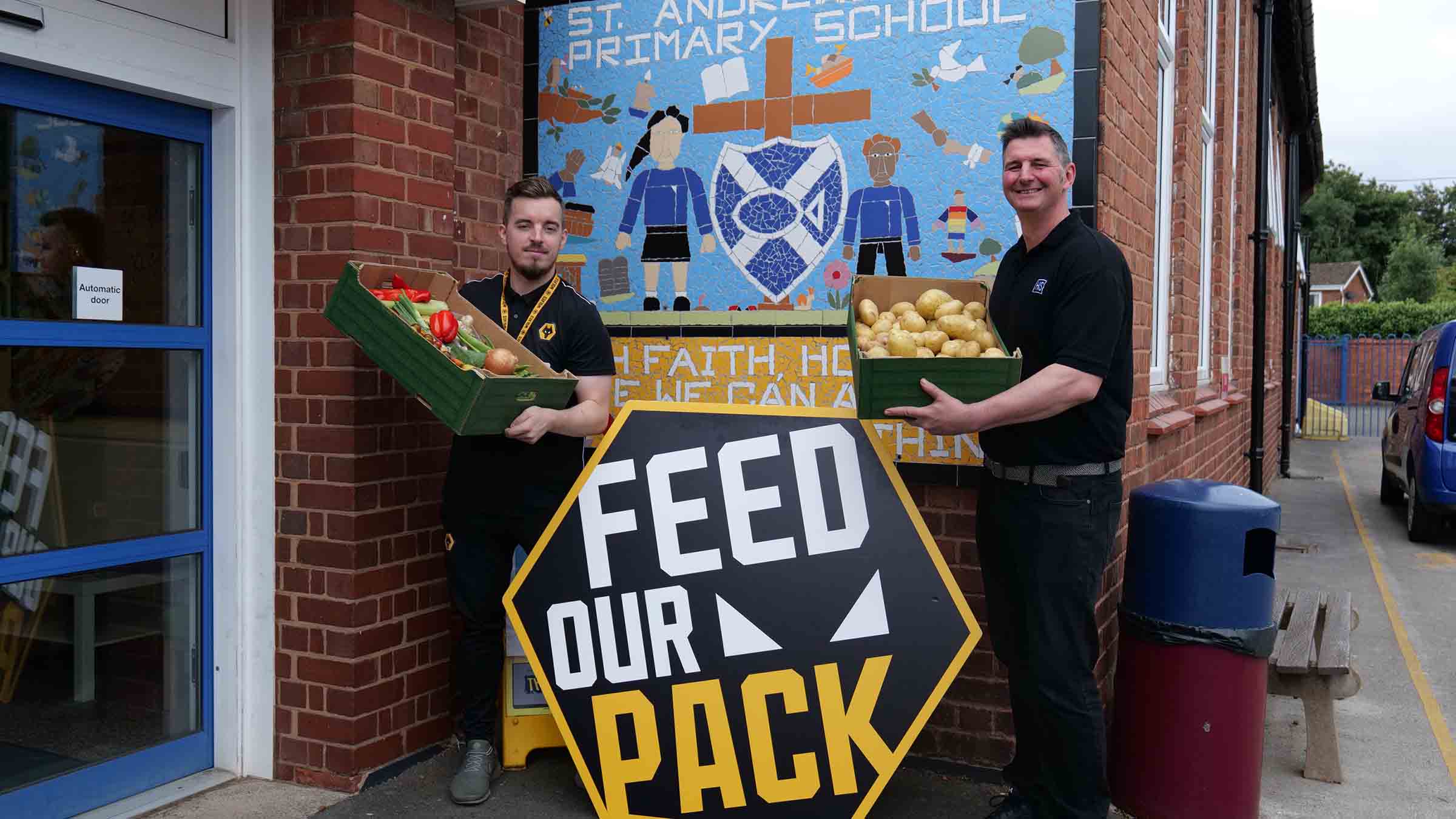 A year on from the sad loss of influential former Wolves Foundation trustee Ian Millard, the award created in his honour was presented for the first time. The Ian Millard Award for Outstanding Educational Achievement was awarded to 17-year-old Mason Leek, for his exceptional performance in the first year of the Foundation’s BTEC course delivered with the City of Wolverhampton College.  Ian, whose family attended the Newcastle home game to present the award, was a former principal of the College who had an energy and enthusiasm for helping young people make the most of their talents.

After having to go ‘virtual’ in 2020, due to the pandemic, the Molineux Sleepout returned in person for 2021, with another special November night under the stars in the Stan Cullis Stand.  Over 100 people took part in the event to raise awareness and funding to support projects run by the Foundation and the Good Shepherd to help people in need across the city.  A fantastic total in excess of £50,000 was raised and a huge thank you again to all who took part and all who donated.  Also in November a video was released to raise awareness of Anti-Bullying week where Premier League Kicks participant Logan got to meet his hero – Wolves captain and Foundation ambassador Conor Coady. There was barely a dry eye in the house! 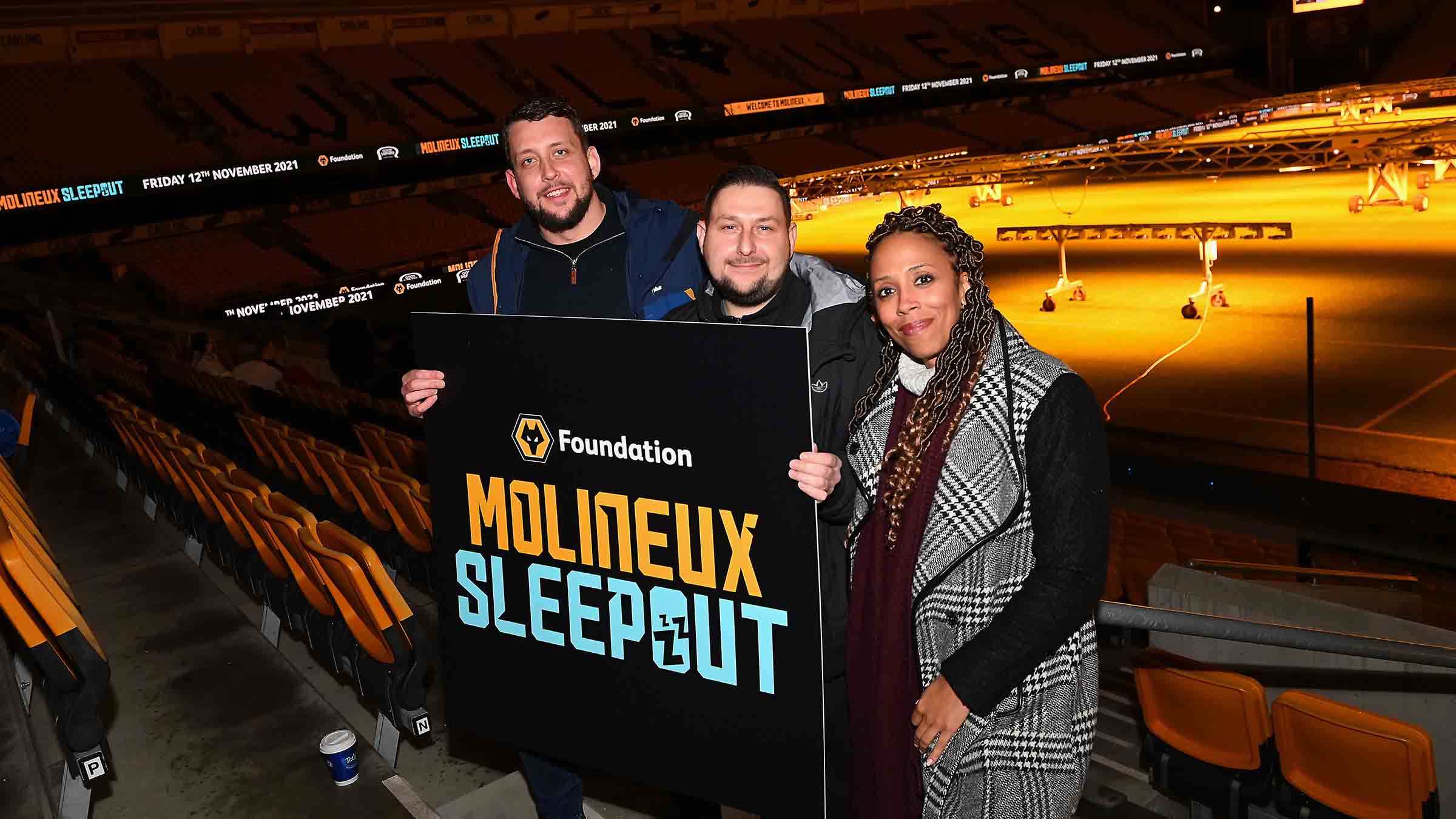 As Christmas approached, and with some Covid-related restrictions returning, the Foundation once again had to adapt in the way it supported the local community.  But in doing so, the deliveries of presents and gifts to those who may not otherwise receive much over the festive season took place in the week up to the big day.  Presents collected from different sources including His Church, the Sikh Toy Appeal and Shoeboxes donated by fans were passed on to the Women and Families Resource Centre, Strengthening Families Hub and local refugees and asylum seekers to spread a bit of Christmas cheer.

On behalf of everyone at Wolves Foundation, wishing all Wolves supporters a very Happy New Year and best wishes for a healthy and brighter 2022.