With a win and a defeat from their opening matches of the 2020/21 Premier League season, Wolves are back in action against West Ham United on Sunday. Here are five things to know ahead of the 7pm kick-off in east London.

The London Stadium has been a very happy host for Wolves since Nuno Espirito Santo’s side were promoted back into the top-flight, with the old gold winning both of their fixtures at the former Olympic venue. Wolves got their first Premier League win of the club’s new era there back in September 2018, with Adama Traore’s late winner securing the three points, before Raul Jimenez and Pedro Neto earned their side the victory in the first behind closed doors game of last season, following the Premier League restart.

Wolves will also be aiming to maintain their winning record against the Hammers, having won all four matches they have played in the past two seasons, without conceding a goal. The Hammers' last top-flight win in this fixture was a 2-0 victory back at Upton Park in 2011, with a Ronald Zubar own goal and Freddie Seares strike being the difference. Expect to see goals on Sunday, as West Ham have failed to keep a clean sheet in their past 10 league games at the London Stadium.

2. GETTING BACK TO WINNING WAYS

Both sides will be aiming to get back to winning ways this weekend having come unstuck in the previous Premier League matches. West Ham are still without a league win this season – although they did beat Hull City 5-1 in the Carabao Cup on Tuesday night – having lost to Newcastle United and Arsenal in their opening fixtures. The Hammers are in danger of losing their opening three league matches for the third time in four seasons, and if they weren’t to find the net, it would be the first time they failed to score in their opening two top-flight home matches since 1971.

Having fallen by three goals to one against Manchester City at Molineux last Monday night, Wolves will also be looking to get all three points from the London Stadium. New signings Nelson Semedo and Ki-Jana Hoever will be available for the first time having signed from Barcelona and Liverpool respectively in the last seven days. Wolves will also hope to banish any unwanted records they might unwillingly achieve if they were to lose, having lost four of their eight most recent top-flight games, as many as they had in their previous 27 in the competition. But if they were to taste victory, Nuno’s side would see Wolves win their opening two away fixtures in a top-flight season for the first time since 1969.

⚠️ Warning to the @PremierLeague...@rubendsneves_ can also score from inside the box 😳

We’ve already mentioned the fact that there should be goals in this game, and with two of the most inform strikers in the league going head-to head, you wouldn’t bet against it against this weekend. Raul Jimenez has scored three goals in his past three Premier League games against West Ham, including the opener in June's 2-0 win at the London Stadium, and after notching in both of Wolves’ matches so far this season, the Mexican can become the first player to score in each of the gold and black’s opening three top-flight fixtures since Derek Dougan in 1973.

His opposite number, Michail Antonio, will be looking to build on his impressive performances following the Premier League restart. The Englishman has scored nine Premier League goals since the competition resumed in June, with no player having scored more in that period prior to this weekend's fixtures. Another player looking to make a goalscoring record this weekend is Mark Noble, who has scored 46 Premier League goals for West Ham and is one short of equalling Paolo Di Canio as the Hammers' all-time top scorer in the division.

In his pre-match press conference, Nuno expressed concerns with the Covid-19 protocols and testing regime (read more about that tomorrow morning on wolves.co.uk), but the head coach also wished his opposite number David Moyes the best, due to the West Ham manager having tested positive for coronavirus.

Assistant boss Alan Irvine, who will again be in the dugout giving instructions to the players, says Moyes will still manage Sunday's game, but from home as he is still self-isolating. West Ham players Issa Diop and Josh Cullen also had to leave the London Stadium before Tuesday’s Carabao Cup win over Hull after positive tests. 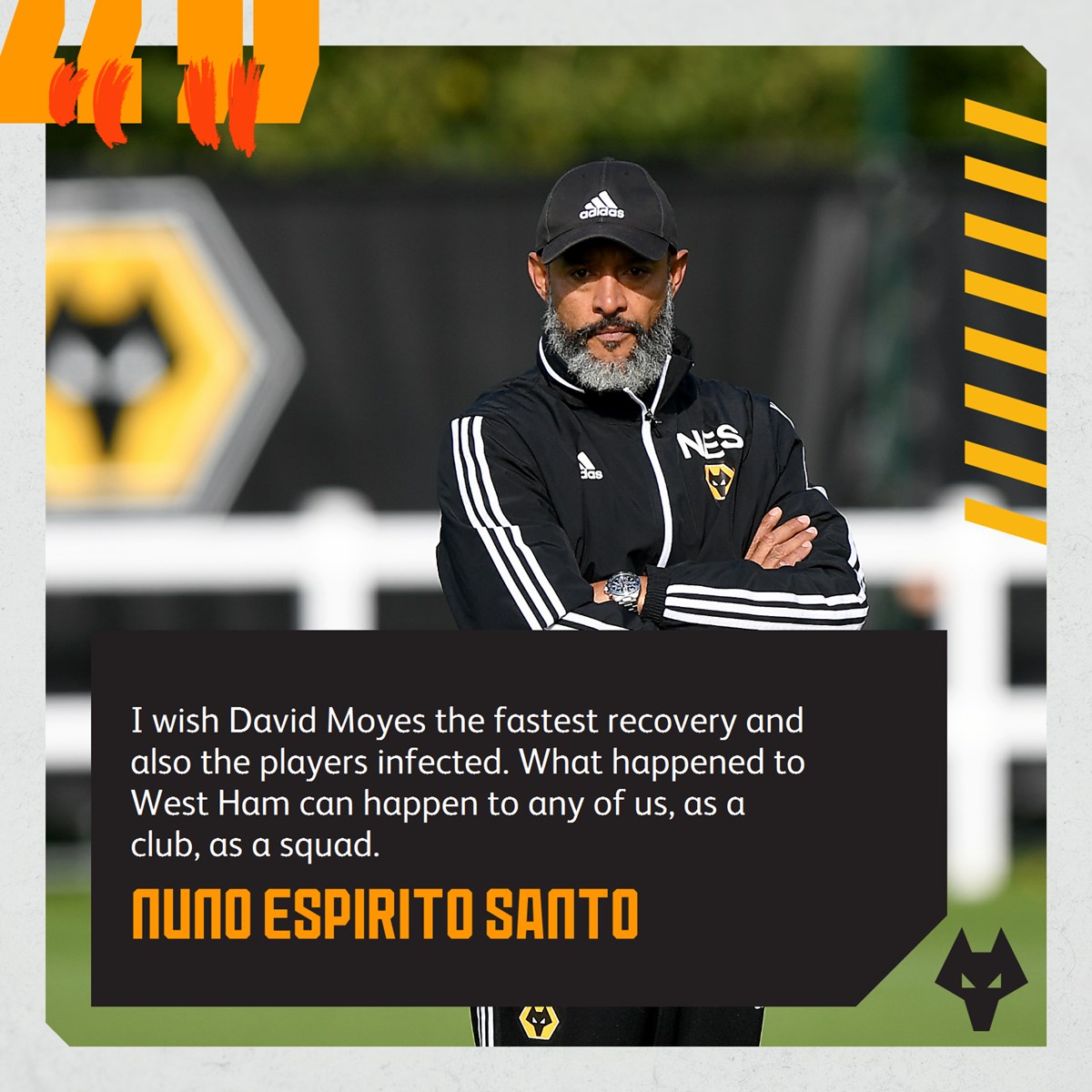 There are plenty of ways to keep up to date with all the action from the London Stadium on Sunday evening with the game being broadcast live on BT Sport 1 from 6.15pm. For those supporters hoping to watch from around the world, click here to find out where the game will be showing in your area,

For those of you who aren’t able to watch on BT Sport, Matchday Live Extra returns once again on Sunday evening, with the hugely popular free matchday service coming live from the capital as by Mikey Burrows and Andy Thompson, will be inside the London Stadium. From 6.15pm, the duo will be joined by Chris Iwelumo and Alex Rae to preview the match and provide half-time and post-match analysis.