Wolves vs Fulham | 5 things to know

For the final time this season, Wolves will step out at Molineux. Nuno Espirito Santo’s side have already securing the club’s highest finish in a top-flight season in almost 40 years. Here are five things to look out for on Saturday afternoon as Fulham are the visitors for a Premier League clash.

Not since the early 1980s have Wolves had a season in the top-flight with as much success as this one. Records galore have been broken since the side arrived in the Premier League last summer, including team gongs and those for individual players. During his campaign, Wolves have scored 46 Premier League goals, equalling the club PL record for most goals in a single campaign – also netting 46 in 2010/11. But not since 1979/80 have they scored more top-flight goals in a single season, with 58. With 13 goals, Raul Jimenez is Wolves' leading Premier League goalscorer this season, scoring the most PL goals a player has netted for the club in a single campaign. Joao Moutinho has made eight Premier League assists this campaign, equalling the Wolves PL record for most assists in a single season – which was also eight, by Matt Jarvis in 2010/11.

Heading into the match unbeaten in their last three Premier League matches, Fulham have had an upturn in fortunes since their relegation to the Championship was confirmed in early April. However, their record at Molineux is not one of the greatest. Saturday will be the first Premier League match between the two sides at Molineux since August 2011 – a game which saw Wolves briefly flirt with top spot in the table. Fulham have lost three of their four Premier League away fixtures against Wolves, with the only exception a 1-1 draw on 23 April 2011. The Cottagers have also won only two of their 14 top-flight away matches versus Wolves (drawing five and losing seven), with the two positive results for Fulham coming in April 1961 and April 1962. Fulham are also winless in 14 competitive fixtures versus Wolves at Molineux, since a 4-0 triumph in the second tier in March 1985.

At 2.30pm on Saturday afternoon prior to kick-off, there will be a special celebration for Nuno who is to be honoured by the University of Wolverhampton. The head coach will receive an Honorary Doctor of Sport from the university in recognition of the club’s success under his leadership and his contribution to sport in the region. The Vice-Chancellor of the University of Wolverhampton, Professor Geoff Layer, will be on hand to awarded Nuno with his doctorate which will celebrate the two seasons of Wolves under his leadership which have seen Wolverhampton gain recognition and attention internationally, returning a sense of pride back to the city and club, as well as the club returning to the Premier League after a seven-year absence and a first FA Cup semi-final of this millennium.

Nuno has spoken regularly this season about the small size of Wolves’ squad, and by only using just 19 different players in the Premier League this season, the team has set a new league low record. Only Liverpool (19 in 1995/96) have used fewer than 20 different players in a single campaign since 1992. With no new injury worries heading into the match against Fulham, Nuno could once again stick with the same side who have proved their worth to him this year, but the head coach has mentioned the possibility of giving two of his squad members – goalkeeper Will Norris and defender Maximilian Kilman – a run out before the season is up. Could Saturday see a change to the line-up?

Fulham will be in high spirits, coming to Molineux hoping to make it four wins from four, but caretaker manager Scott Parker has already confirmed one member of his squad won’t be making the trip to the Black Country. Defender Denis Odoi will sit out the Premier League match as part of the concussion protocol after taking a boot to the face during the first-half of last weekend’s home win over Cardiff. Apart from the 30-year-old, Parker is confident he will have an otherwise fit squad to select from.

Although finishing seventh in the Premier League table is a possibility, victory over Watford last weekend saw Wolves secure their first top-half finish in the top-flight since 1980. But Nuno and his players will want to end the season on a high. Three points against Fulham will go a long way to sealing a top seven finish, which will make Wolves only the sixth side to achieve that feat in Premier League history. Wolves' tally of 54 points is also the best by a promoted club in the Premier League since Reading finished with 55 points in 2006/07, while the most recent promoted team to finish a PL campaign with more than 55 points was Ipswich Town in 2000/01, who ended on 66 points. Nuno’s side have also won eight of their last 10 home matches in all competitions and could equal their record of 11 home matches unbeaten in the Premier League with victory on Saturday. Star striker Raul Jimenez has spoken of giving the Wolves supporters one more opportunity to celebrate at Molineux this season. 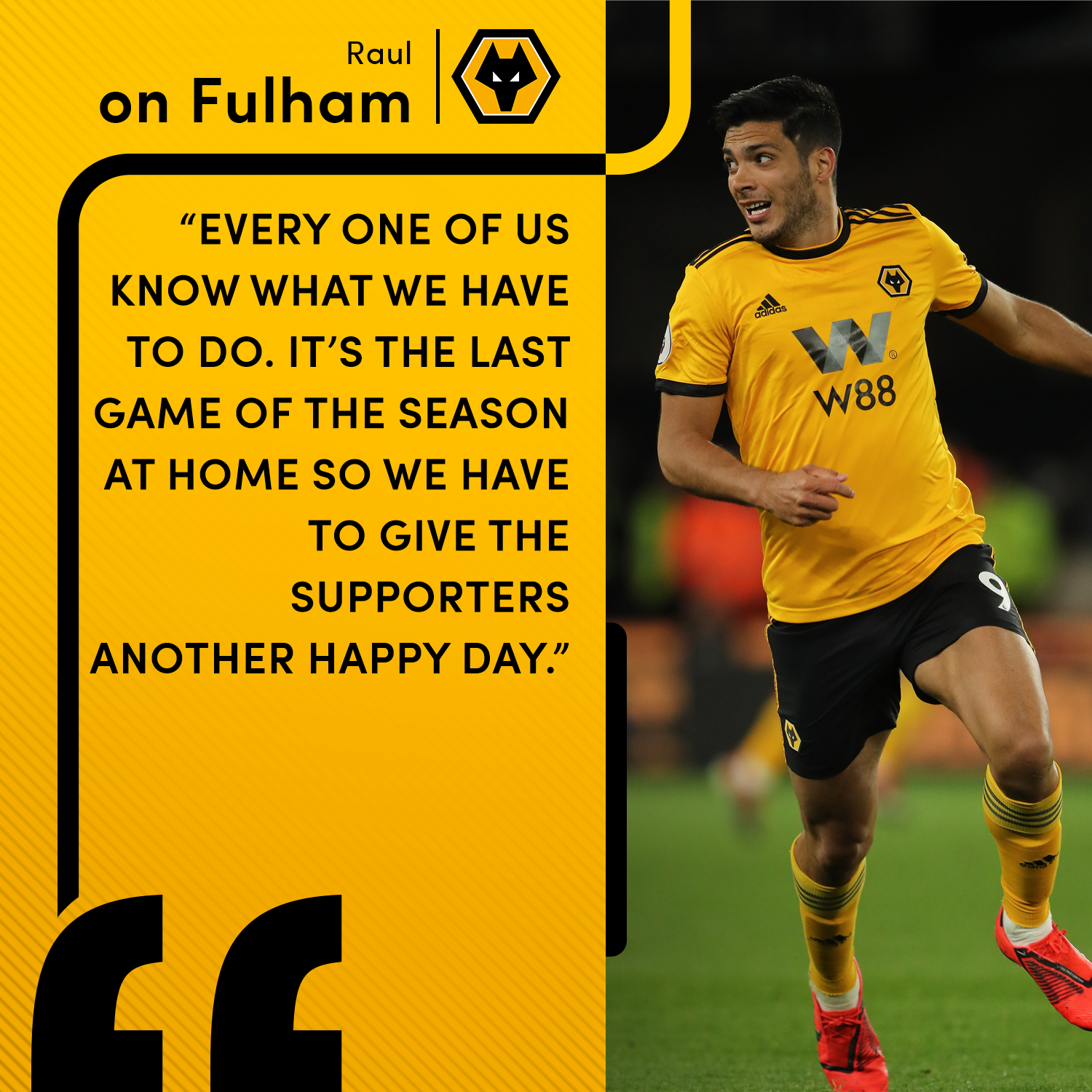