Wolves vs Cardiff | 5 things to know

Wolves fell to their first defeat in nine games in all competitions against Huddersfield Town on Tuesday night, but despite the result, Nuno Espirito Santo’s side still ended up climbing the Premier League table to seventh. Here are five things to look out for at Molineux on Saturday as Wolves look to get back to winning ways against Cardiff City.

1. RUDDY GETS THE NOD

Nuno Espirito Santo confirmed John Ruddy will start between the sticks for the first time in the Premier League this season. Rui Patricio has been in goal for every minute of league action this season, but Ruddy has been given the nod, with Nuno keen to keep his goalkeeper sharp ahead of an important FA Cup quarter final in two weeks’ time. Ruddy last played a league game against Sheffield Wednesday in April 2017 but has since kept three cup clean sheets this term. It means Nuno is making at least one change to the side which lost to Huddersfield, will there be more?

As for the opposition, with multiple players absent from their recent defeats to Watford and Everton, Cardiff expect to have a fully-fit squad for the visit to Molineux on Saturday. This means Neil Warnock should be able to call on Victor Camarasa, Oumar Niasse and Joe Ralls after they played no part in recent matches, while Harry Arter found himself on the bench against Everton, so could the midfielder be in for a recall to the starting 11?

When delving into the top flight history books, prior to the creation of the Premier League, the records favour Wolves against Cardiff. Saturday will be the first top division meeting between the two clubs at Molineux since a 1-1 draw on 23rd September 1961. Ted Farmer scored Wolves’ goal on the day, while Alan Harrington was Cardiff’s goal scorer. Overall, the Bluebirds have only won one of their seven top flight trips to Molineux, drawing three and losing the other three. That solitary victory arrived on New Year’s Eve of 1955 at their old home, Ninian Park, however Wolves had won the corresponding fixture 9-1. For Warnock individually, he brought his QPR side to Molineux in the Premier League in September 2011, when he masterminded a 3-0 victory. Saturday will be just his second Premier League visit to Molineux as a manager.

3. DEFENDERS AMONG THE GOALS

In those previous five matches against Cardiff, four of Wolves’ goals have come through defenders. Two of those goals came from Danny Batth in a 3-1 victory at Molineux in April 2017 (the other was scored by Helder Costa), while the other two – both coming in the separate 2-1 defeats at the Cardiff City Stadium in 2016 and 2018 – were notched by Matt Doherty. The Irishman has had his shooting boots on this season, netting on six occasions, while making eight assists in Premier League and FA Cup fixtures. The attacking threat of the defender has already made him a hit among Fantasy Premier League players, and with the defensive scoring record Wolves have against Cardiff – of which he has been a big part of – this weekend’s game might by one to give the flying wing-back a place among your team. 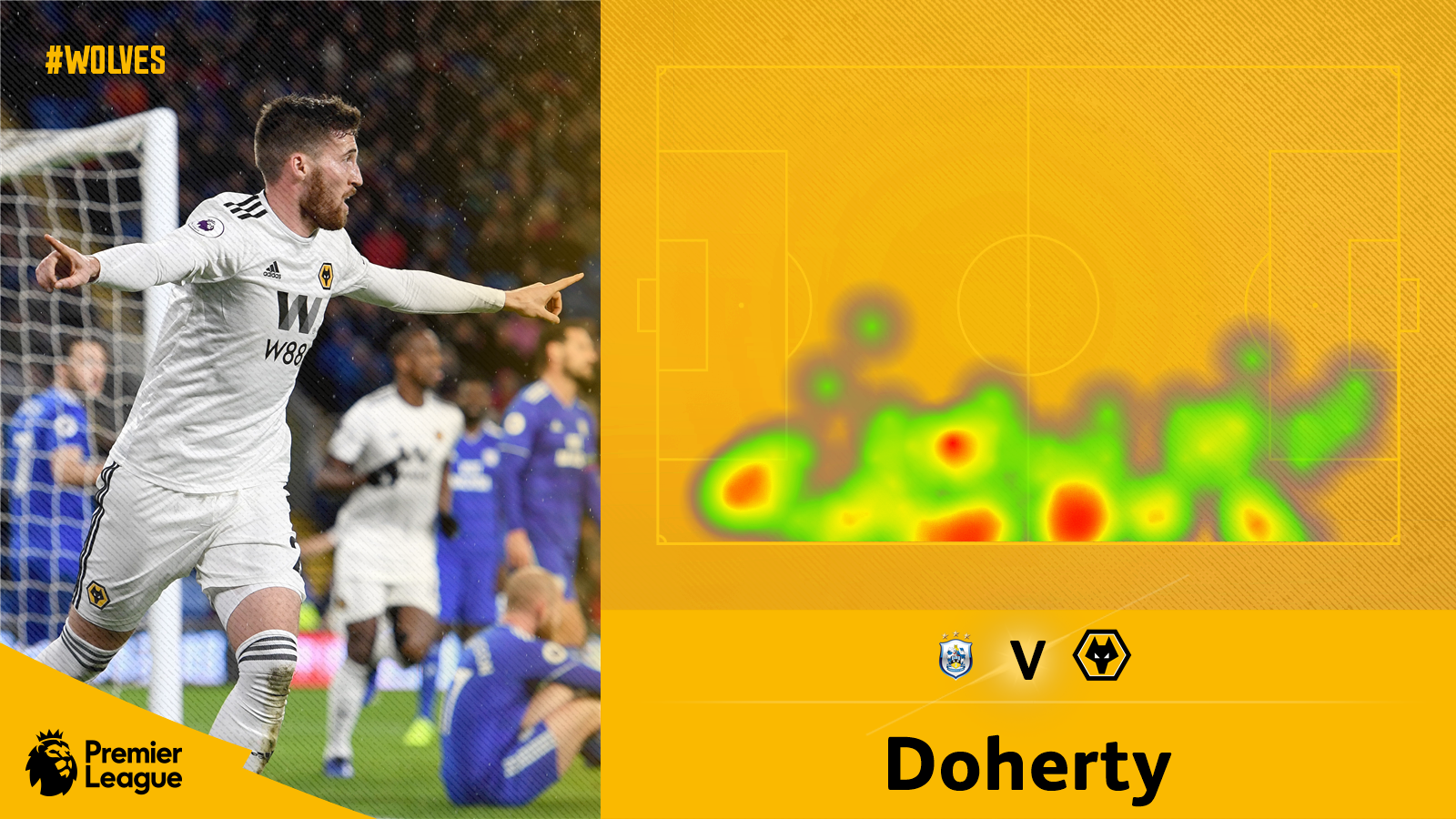 Wolves named an unchanged starting 11 for the 12th time in the Premier League this season in Tuesday night’s defeat to Huddersfield Town, more than any other side, and one of the positives which came out that game was Ivan Cavaleiro making his 100th appearance for the club. Coming on in the 66th minute in place of Diogo Jota, the Portuguese international worked hard to get Wolves going in the game, but to no avail. With no fresh injury worries for Wolves heading into Saturday afternoon’s clash with Cardiff, has Cavaleiro done enough to convince Nuno to rotate his starting line-up?

There have been plenty of ups and downs for both Wolves and Cardiff in the previous meetings between the two sides, with the Wanderers coming out on top on more occasions than this weekend’s visitors to Molineux. Wolves have claimed 28 previous victories compared to Cardiff’s 20, while 14 games have ended in draws. During the past five games, both teams have alternated wins, with Cardiff being victorious in December 2016, before Wolves won in April 2017. Cardiff won 2-1 at Molineux in August 2017 but Wolves took the spoils 1-0 in April last year – after the Bluebirds missed two penalties in added time. Cardiff won 2-1 at home earlier on this season, so will Saturday’s result go the way of the form book? Hopefully for Wolves supporters – and captain Conor Coady – it will. 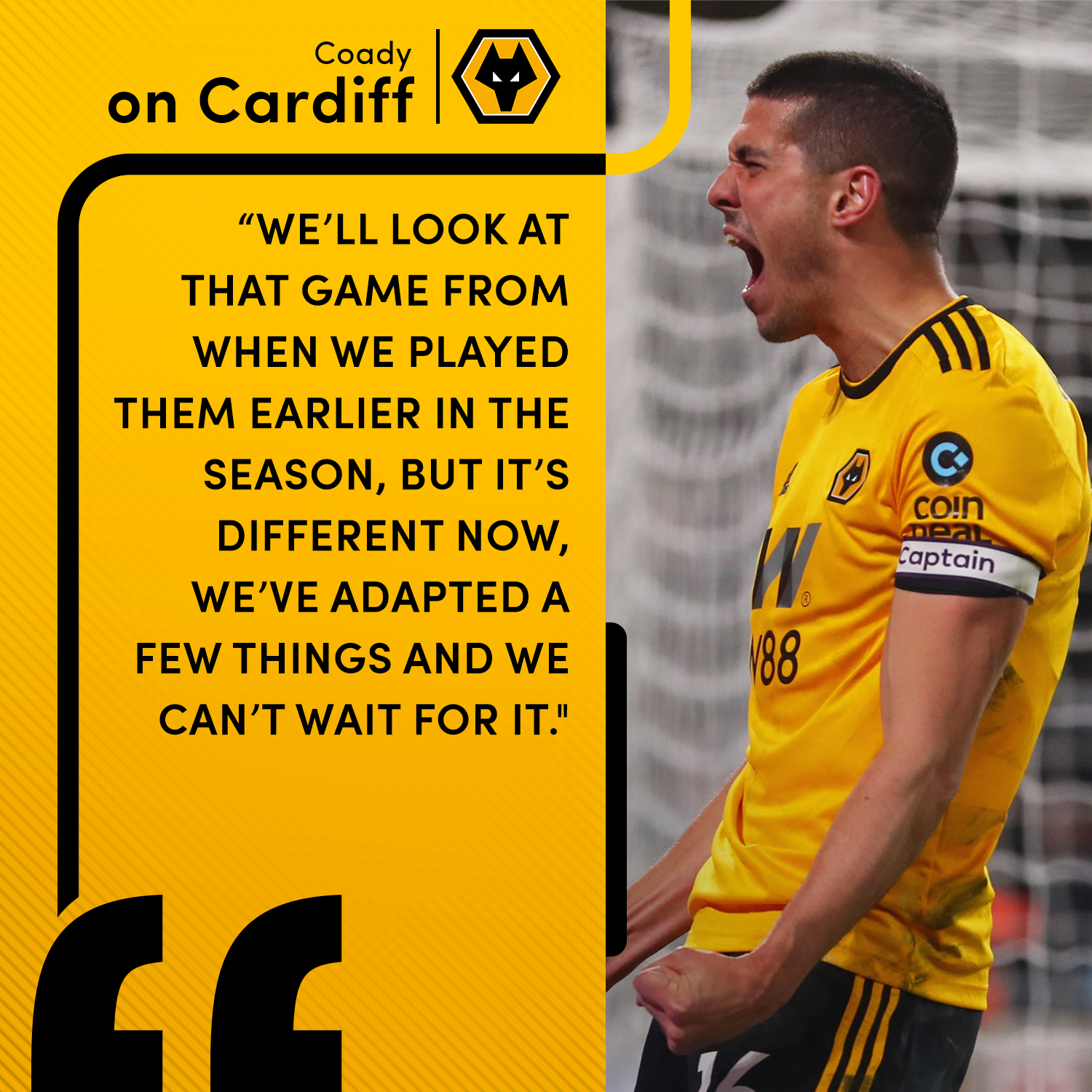