Everton vs Wolves | 5 things we spotted

Three goals provided Wolves with three points as Nuno Espirito Santo’s side moved themselves clear of the chasing pack in the Premier League’s seventh spot. Goals for Ruben Neves, Raul Jimenez and Leander Dendoncker sealed the victory, but here’s other things we noticed following the trip to Goodison Park.

Forget about the football action, what everyone will remember from this match is the appearance of a mysterious black cat. The moggy held up play for several minutes as he jinked left and right before racing down the touchline, offering a few moments of joy to both sets of supporters. The result of the ‘purrpatrators’ actions was for referee Lee Mason to add on seven minutes of added time, but the cat’s appearance caused social media to explode. The Mayor of Liverpool commented the cat “provided the only entertainment for Evertonians” and that he was “the only one who got behind the Wolves defence and in their box all game”. However, Nuno was not too happy, because where he originates black cats are bad luck, adding: “I never want to see a black cat again.” 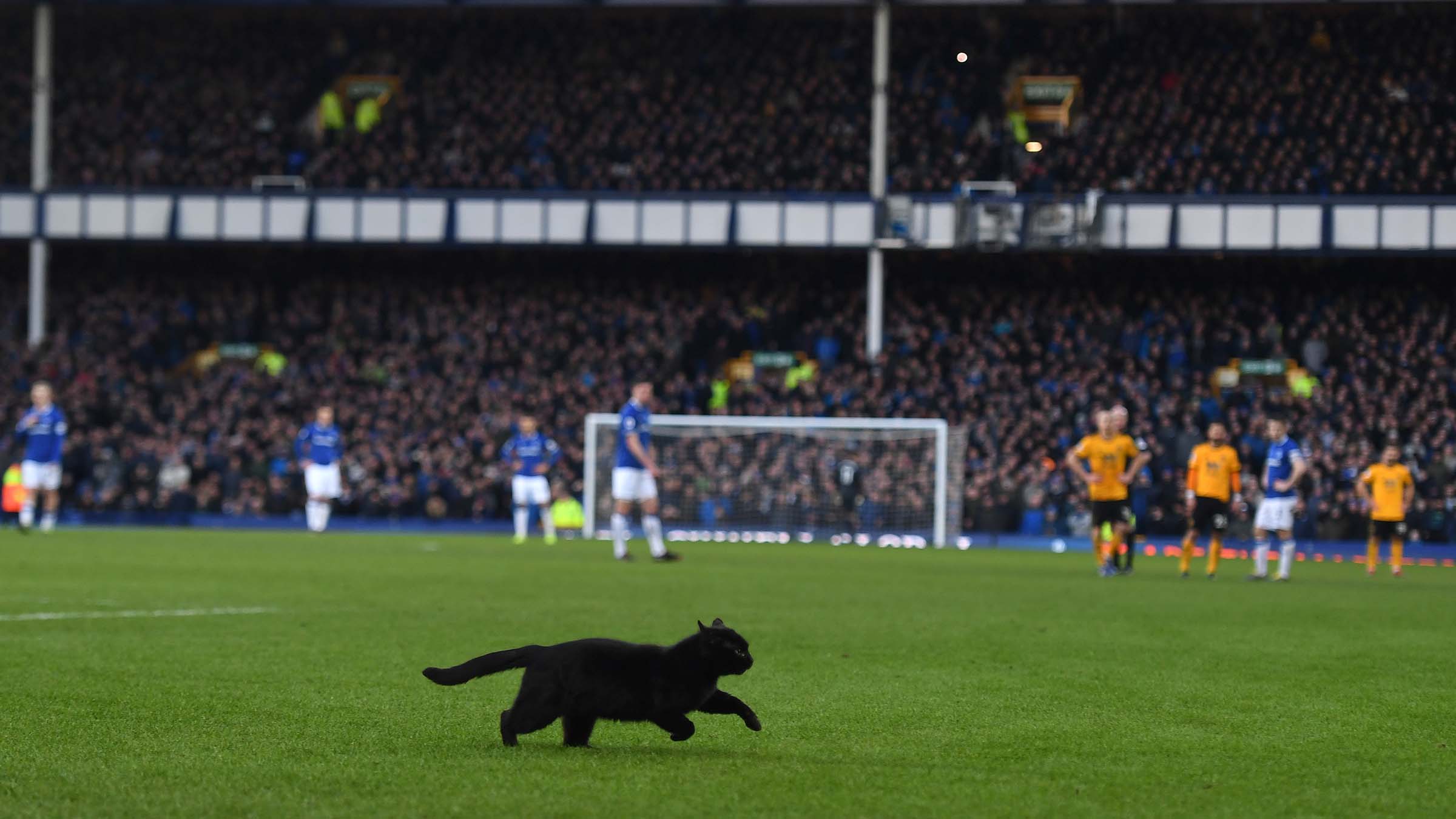 Nuno’s side have been breaking Wolves’ Premier League records left, right and centre this season, and they continued to do that with victory over Everton on Saturday afternoon. By beating the Toffees, Wolves sealed their first ever Premier League win against the blues at Goodison Park, as well the first in the top-flight since September 1979. By scoring three goals for the third consecutive game for the first time in the Premier League, this Wolves also equalled a top-flight record which has been held since March 1980, while the win also equalled the team’s highest tally of 11 Premier League victories which was set back in 2010/11 – and Wolves still have 13 more games this campaign to add to that total.

There are not many players in the Premier League who can match what Joao Moutinho can do when the ball is at his feet. Third in Portugal’s all-time appearance list - behind Cristiano Ronaldo and Luis Figo -  the Euro winner is possibly the transfer of the season, bringing magic to Molineux which hasn’t been seen in several decades. Against Everton, Moutinho made the most passes (37), most forward passes (17) and teamed up with Diogo Jota for the best partnership in the Wolves side – 11 passes between the pair, and by planting the ball right onto the head of Raul Jimenez for Wolves’ second at Goodison, Moutinho also took his assist tally to five in the past three matches. He is currently seventh on the Premier League assist list for this campaign, but if he continues at his current rate, it won’t be long before the Portuguese wizard is knocking on the door of table-leader Eden Hazard. 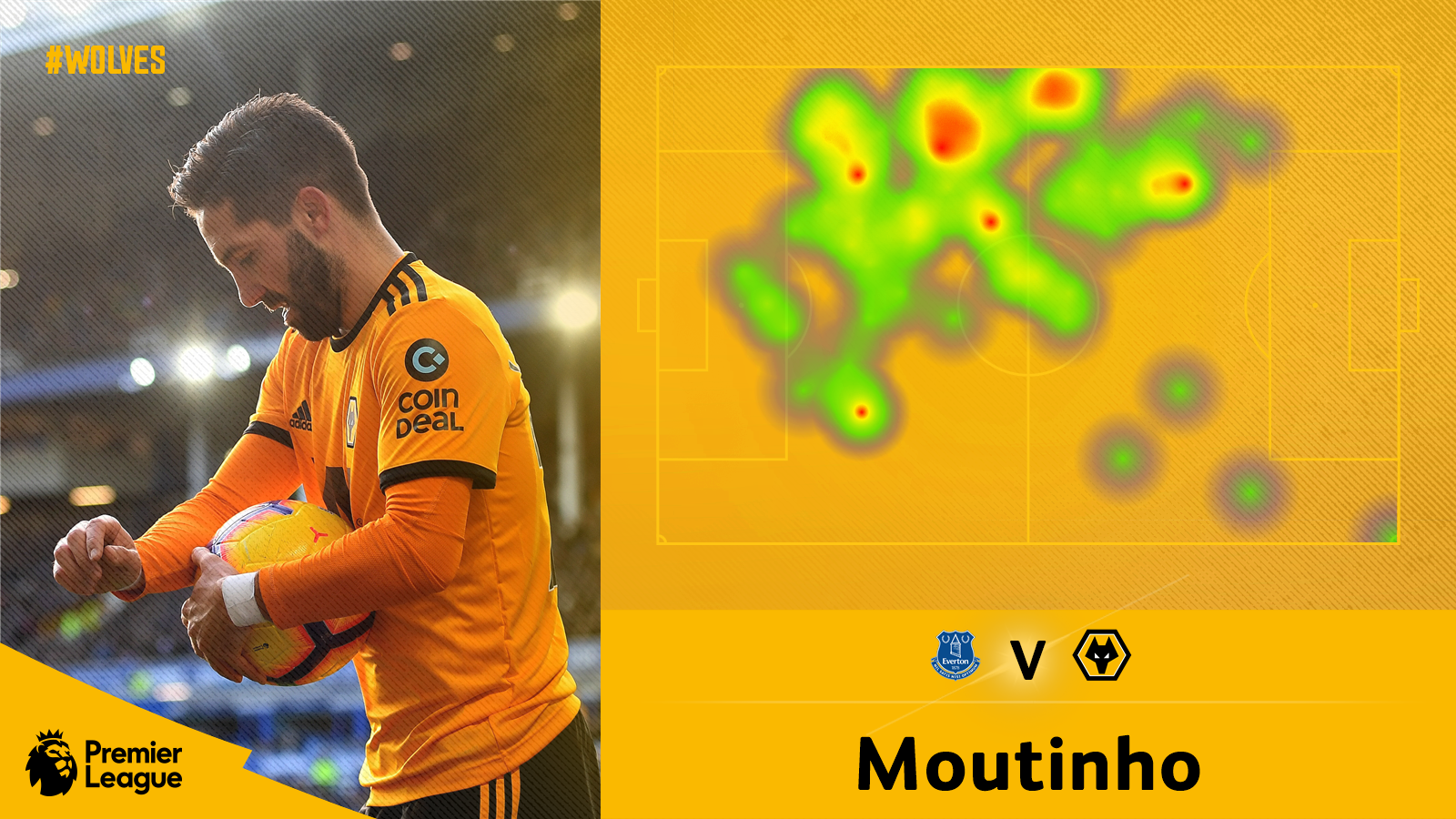 Boosted by the return of Willy Boly, which left Nuno with a full squad to chose from for the trip to Everton following the Frenchman completing his three-match suspension, Wolves pulled away from the chasing pack in the Premier League table to solidify their seventh-place position. Romain Saiss was the man who made way for Boly, as Nuno made just the one change from the team which beat West Ham United 3-0 at Molineux on Tuesday night. With these two results, added to the 4-3 victory against Leicester City last weekend, Wolves now have 38 points, four clear of eighth place Watford – the only team between eighth and twelfth which Nuno’s players haven’t beaten this season - as six teams battle to be named the ‘best of the rest’.

Coming close in recent games to openning his goal scoring account in gold and black, Leander Dendoncker finally made his breakthrough by netting Wolves’ third against Everton. ‘The Donck’ has been a revelation in tightening up Nuno’s midfield since he became a regular feature in the side, allowing Neves and Moutinho to blossom even further, knowing they have the safety blanket of the Belgian international. In his defensive midfield role, Dendoncker attempted the most tackles of any player on the pitch (22), won the most tackles (12) and claimed the most ball recoveries (12). But as well as his defensive duties, he is also a threat in attack. His ‘goal’ against West Ham might have been cancelled out for offside, but that wasn’t the case at Goodison when he powered the ball into the roof of the net from a volley, eight yards out. Following the game, Dendoncker said he was happy to score, but helping his side get the three points was ‘most important’.