Part two of Cult Heroes casts a light on a further four former members of the pack who were admired by the club’s supporters, often for reasons beyond their numbers on the pitch.

“Despite his rugby league background, both Peter and his brother Cyril had significant football talent. They came from Yorkshire and were surrounded by rugby league players. Peter joined Wolves in 1962 as a 17-year-old and signed a six-year contract, which was good then. Stan Cullis gave him his debut early in the 1963/64 season in a victory over Leicester City. The teenager played with an arrogant swagger and it quicky became apparent that Knowles was playing below his level in the Second Division. He was rewarded with an under-23 cap and looked destined for a glittering career, both for club and country. Returning from the US to Britain in 1969, where Wolves had been on tour, Knowles made an announcement which saw his career take a dramatic turn. Whilst in Kansas, he became a Jehovah’s Witness and, in his own words, he said, ‘Though I will still do my best on the field, I need more time to learn about the bible and may give up football.’ Wolves began the 1969/70 season brightly, winning the first four matches, Knowles scoring in the first three of them, but then a 3-3 draw with Nottingham Forest was the last game Knowles ever played. Wolves retained his registration for 12 years, but in 1982 Graham Hawkins conceded defeat and terminated his contract. In 1991, Billy Bragg released a song called ‘God’s Footballer’ as a tribute to Knowles. He later worked as a milkman, a window cleaner and in a warehouse at Marks & Spencer, consistently stating he never regretted giving up football.”

“He was probably one of the best players I’ve ever seen; he was fantastic. The system then meant a first-team player would have an apprentice assigned to him to clean his boots and discuss their development. Peter Knowles’ mentor was Peter Broadbent and, in some ways, they were similar in style – both very good ball players. There was an arrogance about Broadbent which you saw in Knowles as well, running down the wing, stopping, sitting on the ball and carrying on. When he announced that he was leaving the club and his last game would be against Forest, in that game he was partnering Derek Dougan up front, and Wolves were three up. The second-half they conceded three and got a draw and there were banners asking him to stay. People thought he’d come back, and he did keep a pair of boots in his loft, so came back and played in testimonials, but there was never any urge to go back properly. They do tell me, he talks a lot about football and the old days, so he’s still proud. When he was at Marks & Spencer in Wolverhampton, he would stack shelves, and in the warehouse, they used to say he was no good at football, so he’d take a tennis ball out of his pocket and start ball juggling. It shows, despite all the money involved, some people have their eyes on a different prize.” 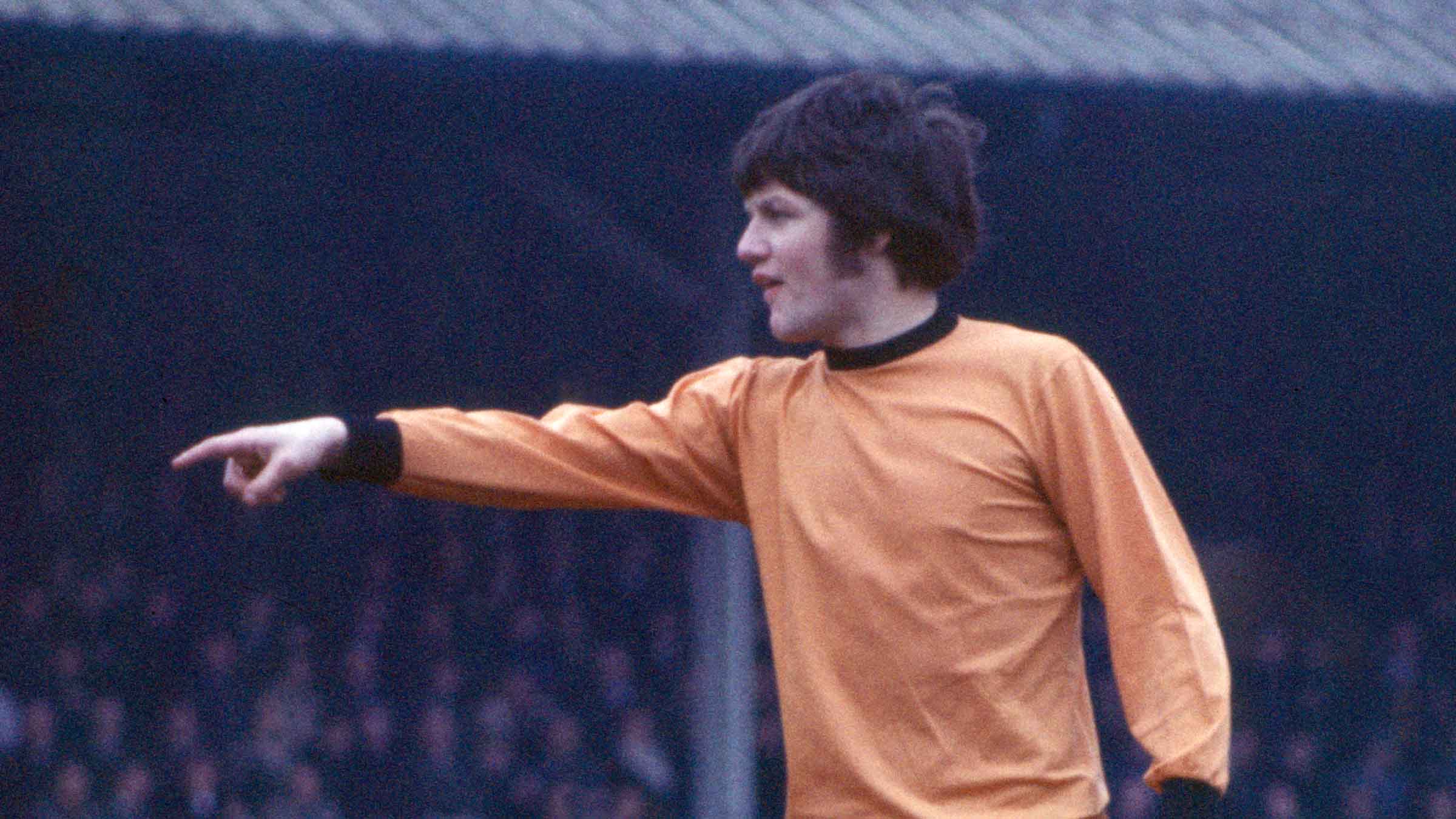 “George Nganyuo Elokobi was born on 31st January 1986. He moved from his native Cameroon to England at the age of 16, joining Colchester United. Wolves signed him in January 2008 and he began the 2008/09 campaign as the regular number three. However, in the fourth game of the season, he suffered a serious knee ligament injury. Luckily, he returned from injury faster than expected and was able to feature as a substitute on the final day of the season against Doncaster Rovers to lift the Championship trophy. After 85 appearances and two goals, George went on to play for several other clubs and scored at every level from the Premier League to National League South. He came close to an international cap twice, being called up and never getting a game for Cameroon. Elokobi had a magnificent physique and Mick McCarthy once said on TV that George was his body double.”

“He did look like a rugby league player and was very popular. There was no nonsense with him, he was a hard tackler, but he put his heart and soul into it. With him playing full-back, he was closer to the crowd than people playing in midfield, so I think they tend to get better relationships. Some members of the crowd get closer to the players and that was the case with him, so he comes back to Molineux to see games. Back when he was here, if a player wasn’t in the squad, they were given the job to see sponsors or the DSA and people like Elokobi got to know the fans well, he’d go to see them and was easy in their company, which was good. It isn’t just playing which makes you iconic, it’s being personable too.” 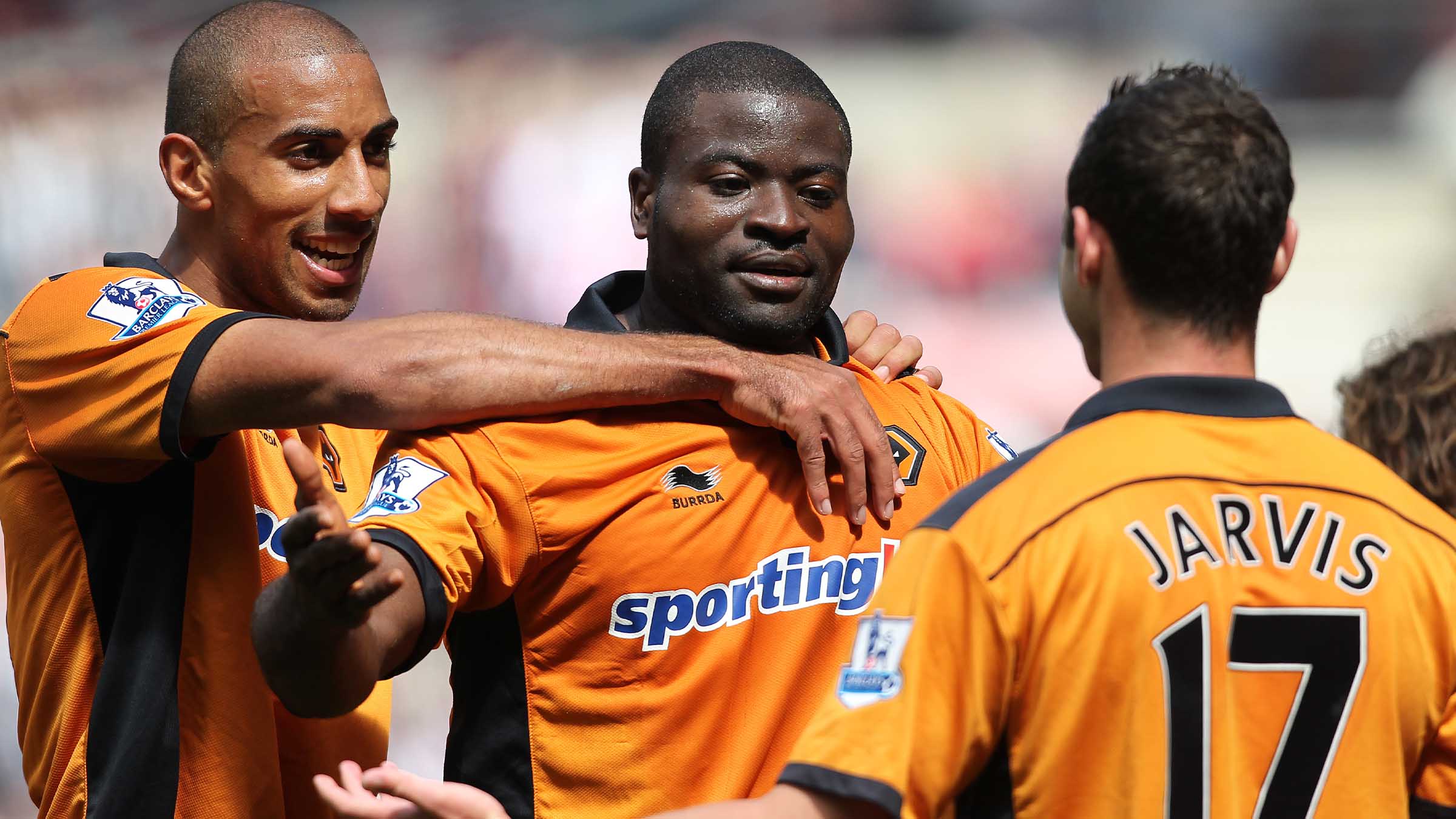 “Kevin Muscat was born in Crawley but began his professional career in Australia. He moved to Crystal Palace, his first team in Britain, and made nine top-flight appearances, before moving to First Division Wolverhampton Wanderers for £200,000 in October 1997. He remained at Wolves for five seasons before moving to Scotland to join Rangers on a free transfer. He was a part of the Rangers squad that won the domestic treble in 2002/03. His final British club was Millwall and he played for them from 2003 to 2005. In 2004, he captained the Lions to the FA Cup final for the first time in their history. He returned to Australian in 2005 to captain Melbourne Victory in the inaugural season of the A-League. He had a dominant personality and an aggressive style and won some admirers. Former England international Terry Butcher stated, ‘Every manager in the A-League would love to have Kevin and I’m no exception.’ However, in December 2013, Spanish football website El Gol Digital named Muscat as football’s dirtiest ever player. In a career spanning 19 years, from 1992 to 2011, Muscat received 123 yellow cards and 12 reds. He was announced in June 2020 as the manager of Belgian First Division team Sint-Truidense VV, however just six months later he was sacked due to results.”

“There’s a video on YouTube where he’s in the wall for a free-kick and the referee was on the far side, and he was picking up mud and trying to throw it into the eyes of the player taking the free-kick, which was his kind of thing. While at Wolves he was named the Fans’ Player of the Season, but he did fall from favour a bit, because even for the fans it was a bit too much what he was doing. He’d kick people up in the air – Aussie toughness. You don’t mind a bit of it when they’re on your team though, and I think that’s important.”

“Mo Camara was born in 1975 in Guinea. He started in French football as a youngster and moved to England in the summer of 2000 in a £100,000 deal, becoming a cult figure amongst Wolves fans. He was known for his commitment and pace, despite sometimes displaying a lack of positional sense and ball control. He was a regular starter in the first-team for two seasons, but eventually left for Burnley in 2003, before spells with six other teams, including Celtic and Derby County. Camara was made head of scouting for Derby County in February 2014 and opened a bar in Tettenhall in 2011.”

“There was a spoof column in the ‘Load of Bull’ fanzine we had at the time, and it was called the ‘Mohammed Camara Appreciation Society’. It was there to celebrate his eccentricity because he was a loveable character. You got a laugh out of him; they didn’t mock him, but he laughed with them – he was good for that. You can’t say the bloke wasn’t wholehearted, he really was. Sometimes you see players’ heads drop, but I never saw that with Camara. He was great.”