Though he may not have been a constant presence on the pitch in his five years at Molineux, there can be no doubt that John Ruddy played a key and transformative role in Wolves’ progress, in his time at the club.

If you were to ask the members of staff or players around Compton Park to give you their honest opinion of Ruddy, there would not be a single person who’d respond with anything other than overwhelming positives.

Ever since he first stepped foot through the gold and black doors in July 2017 as a free agent, having left Norwich City following a glittering career which saw the 35-year-old feature almost 250 times for the Canaries, while also earning an England cap, it was clear that Ruddy possessed the values that would see him fit straight into a club which had its sights set high.

After an underwhelming season which had seen Wolves finish 15th in the Championship, the club invested well to ensure they would close the gap on the Premier League – bringing in an experienced heads such as Ruddy and Ryan Bennett, alongside young continental talent, including Ruben Neves, Diogo Jota and Willy Boly. And what a difference they had.

On the pitch during the 2017/18 season, Ruddy was head and shoulders above any other keeper in the second tier. Straight from the off in his first competitive start against Middlesbrough, he had to be at his best to deny Britt Assombalonga from netting late on as Wolves held out for a 1-0 victory to earn the perfect start to the Nuno Espirito Santo era.

A first clean sheet was quickly followed by a second in a 2-0 win over Derby County. Wolves were playing with a freedom in attack, knowing they would have the steel and stability of a top-class keeper who would marshal his defence to perfection at the other end.

The old gold lost just three games in their opening 27 of the Championship season, and Ruddy had already amassed 15 shut-outs in that time. An incredible return for a keeper making his debut season in Wolves colours.

As Wolves closed in on a promotion that would see their return to the Premier League confirmed after a six-year absence, Ruddy produced a performance which will go down in the echelons of the club’s esteemed history.

A visit to Cardiff City on 6th April 2018. Before that game, Wolves were seeing their season begin to show its first signs of stuttering. A backs-to-the-wall victory over Middlesbrough took a lot out of the players, who had to rely on a late, late goal to salvage a point at home to Hull City.

Second-placed Bluebirds were closing the gap to Wolves at the top to just six points, but with a game in hand. Defeat at the Cardiff City Stadium could see the pendulum swing dramatically. But that’s when Ruddy stepped in.

Wolves were handed a lifeline just after the hour mark when Neves curled in a stunning free-kick to settle down a nervy contest, but the late drama was still to come.

Diving to his left to palm Gary Madine’s spot kick from 12 yards around the post, Ruddy was swamped by his teammates, but the drama didn’t end there.

Just seconds later he faced another penalty. This time, a sliding Ivan Cavaleiro challenge gave Cardiff hope, but if Ruddy couldn’t get there, the crossbar was to come to Wolves rescue, as Junior Hoilett’s effort crashed off the woodwork and sparked jubilant celebrations.

The keeper’s defining moment of his Wolves career was written into the history books.

Wolves and Ruddy ended the season in style. Another four clean sheets in his final four matches were to follow as the title was confirmed, while the keeper’s 24 clean sheets in his 45 outings also earned him the Championship Golden Glove award and a place in the second tier’s PFA Team of the Season, alongside teammates Boly and Neves.

During the past four years, and following the acquisitions of Portuguese internationals Rui Patricio and Jose Sa, he has played a supporting role in the Wolves goalkeeping department, but despite just three top-flight appearances in that time, Ruddy continued to be the model professional.

His drive and determination to be better every single day has pushed his teammates to follow suit. Both Nuno and current head coach Bruno Lage praised Ruddy for not only being a great goalkeeper and a great team player, but also that of a great man who has played a vital role in the visible improvements to those who had taken the number one spot between the sticks for Wolves.

And when he was called upon to deputise in goal for Wolves, he would always give 100 per cent to the cause. In the 2018/19 season, when those in gold and black were putting the club back where it belongs among the elite of the English game, Ruddy saw his playing time come in the cup competitions – mainly the run to the FA Cup semi-finals.

An incredible one-handed tip onto the bar against Liverpool at Molineux – the team’s only win over the Reds in their last nine meetings – set Wolves on their way in the third round, before important saves against Shrewsbury Town and Bristol City helped to set up a mouth-watering tie against Manchester United in the quarter-finals.

One of the loudest atmospheres the grand old stadium had witnessed for many a year inspired Wolves to victory, as Ruddy once again showed he was more than just a capable deputy, but someone who could lead and galvanise a side looking to make history. As Ruddy raised close friend Coady into the air that special night at Molineux – an image forever associated with the occasion – it felt meant to be.

However, that opportunity of history was cruelly snatched away from Wolves weeks later at the national stadium. Ruddy wasn’t held responsible for any of Watford’s three Wembley strikes which ended Wolves’ dream of a first FA Cup final in 59 years, but things had been shaping up perfectly until the dying embers of injury time. 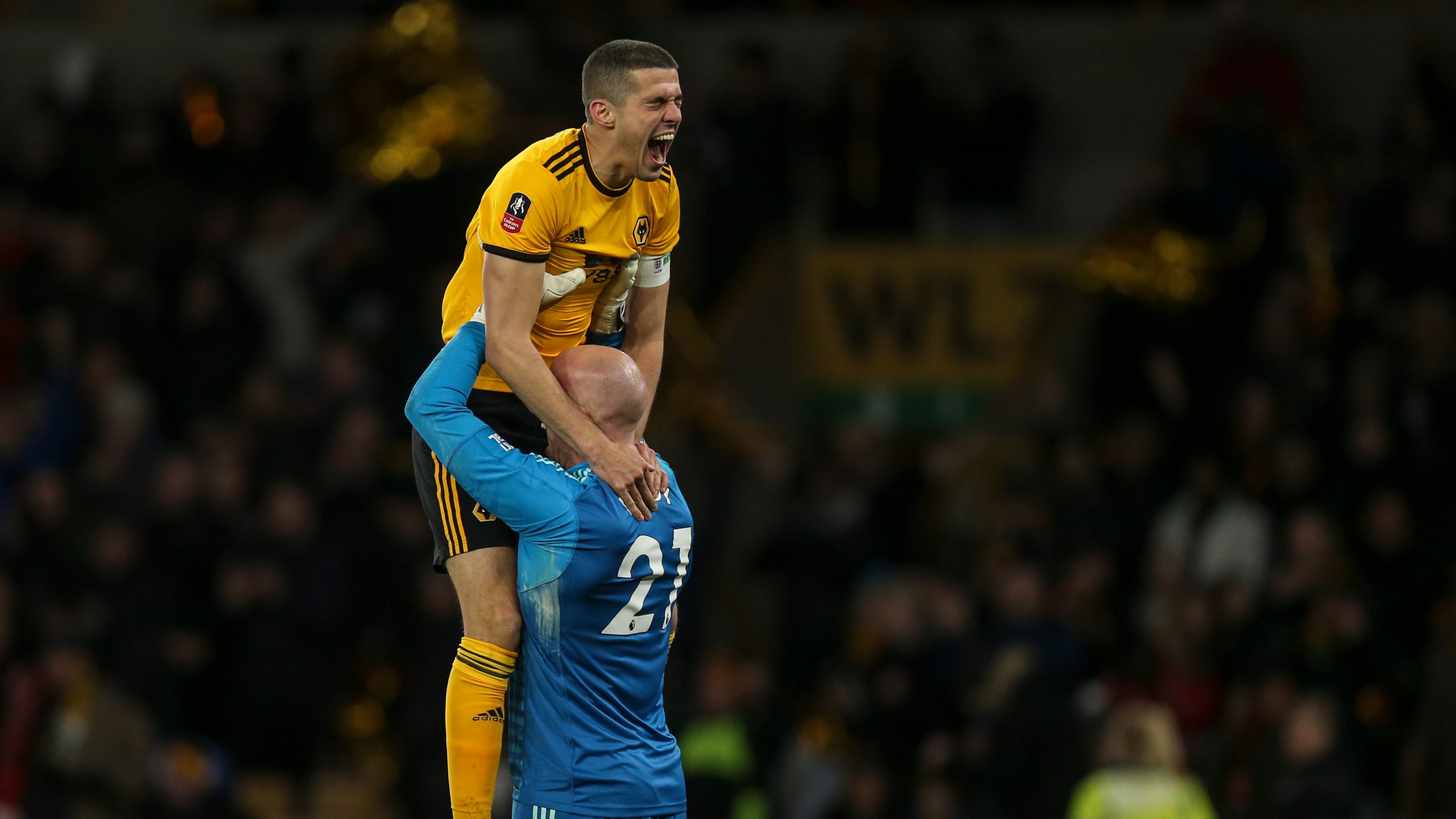 Such harsh disappointments require strong personalities within a group, and despite not playing another minute that campaign, Ruddy took it upon himself to lift spirits and galvanise the squad, which regrouped and secured a different piece of their own history – taking Wolves back to the European stage.

Two times a European footballer before at Motherwell but adding to that tally would have been the furthest thing from Ruddy’s mind after being released from Carrow Road. Two seasons later, and he was back between the Europa League sticks against FC Pyunik and Besiktas, when Molineux was celebrating the latest special chapter of Nuno’s reign, reaching the knockout stages of a major European competition. Ruddy kept a clean sheet on both occasions.

That memorable European journey did come as a cost however, with Wolves bowing out of both domestic competitions in the early stages. Not deterred by the lack of opportunities as a result however, Ruddy simply maintained elite level standards to ensure Rui Patricio was ready for each and every challenge that monumental 59-game season posed.

No challenge on the pitch compared to what the world had become by the end of that campaign, however. The pandemic reduced personnel numbers at Compton Park enormously, so a tight-knit group was required, step forward Mr Ruddy once more. The goalkeeper played six times while football was played behind closed doors, but a forgettable season for Wolves was reflected by the period in society.

Fortunately, in what turned out to be the 35-year-old’s last dance, normality returned to the world this season, and Molineux was once again packed once he returned to the place he’d called home for five years in September 2021 against Tottenham Hotspur.

Cup adventures to rival 2019 once again failed to materialise, which reduced Ruddy’s opportunities considerably, but, almost by fate, the experienced stopper was given the swansong his Wolves career deserved. The Premier League title showdown at Anfield was of little relevance to Wolves, but the opportunity for Ruddy to sign off on the biggest stage of all, with the world’s eye fixated, felt a fitting finale.

John Ruddy will move on to pasture new this summer, but leaves behind a legacy, not simply for performances off the pitch, but application and maintenance of the highest of standards off it. The ultimate professional, who all at Wolves thank and wish well for the future.