As Wolves celebrate a special anniversary of their Texaco Cup win, historian Clive Corbett compiles the story, and his own personal recollections, of a memorable double header with Hearts.

This month marks fifty years since Wolves won a first trophy in 11 years, following their FA cup win over Blackburn Rovers in 1960 – the Texaco Cup in 1971.

The new British Isles Cup was hardly the most prestigious event at a time when that newest footballing beast, sponsorship, was the subject of much discussion with the Watney Mann pre-season tournament (won by Derby County) and the Ford ‘Sporting League’ both in operation for the first time.

The international oil company, Texaco, lent its name and £100,000 to a tournament that involved clubs from England, Scotland, Northern Ireland and Eire that were not current trophy holders.

At the start of the season the jury had certainly still been out on the Texaco International League Competition, with Alan Smith of the People sarcastically claiming that he was particularly looking forward to “titanic struggles between Morton and West Brom, Motherwell and Stoke, and Forfar and Airdrie”.

More seriously, the Sunday Telegraph’s David Miller warned: “What the League has to guard against, and commendably appears to be doing so, is the danger of the tail growing until it wags the dog.”

John Ireland and Bill McGarry were certainly more positive than both of the above when they were later interviewed just prior to the final. 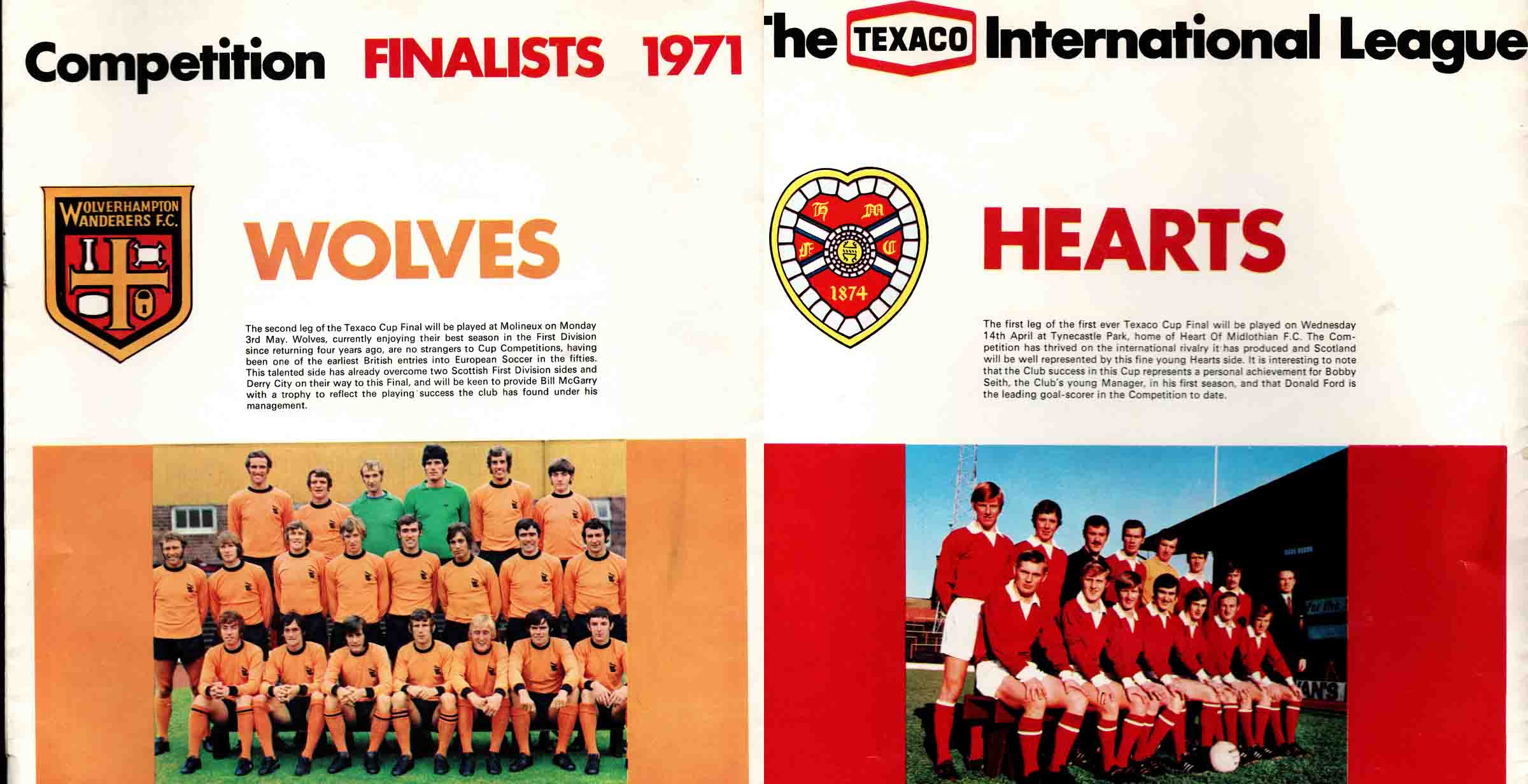 The chairman enthused: “Texaco have given their whole hearted support throughout the competition. We hope we can win it in its first year,” whilst McGarry wrote: “I have enjoyed playing in the competition this year, and it has been a very great help to me.”

Wolves had progressed to the final of the competition on 14th April 1971, courtesy of aggregate wins over Dundee (2-1), Morton (4-2) and Derry (5-0), visiting Tynecastle for the first leg of the Texaco Cup final against Hearts on 14th April.

Don Ford headed the home side into the lead after six minutes, but the equaliser came from man of the match Mike Bailey in the 17th minute. The inspirational skipper, who so nearly missed the match through a back injury picked up against Manchester United, was put in by Dave Wagstaffe to fire home.

Hugh Curran received a short pass from Mike O’Grady on 31 minutes to shoot Wolves into the lead, and three minutes from the end he tapped the ball home after an O’Grady shot had been parried into his path by Jim Cruickshank.

In the last minute, Hearts almost reduced the deficit, but Phil Parkes pushed a shot from George Fleming against the post.

The Express & Star headline was a little premature, “Texaco Cup set for Molineux. Bailey and Curran - Hearts stoppers”, and Phil Morgan wrote: “Wolves should be able to start clearing a place in the showcase at Molineux for the handsome golden Texaco Cup, Britain’s newest soccer trophy.” The second leg would prove to be far from a formality. 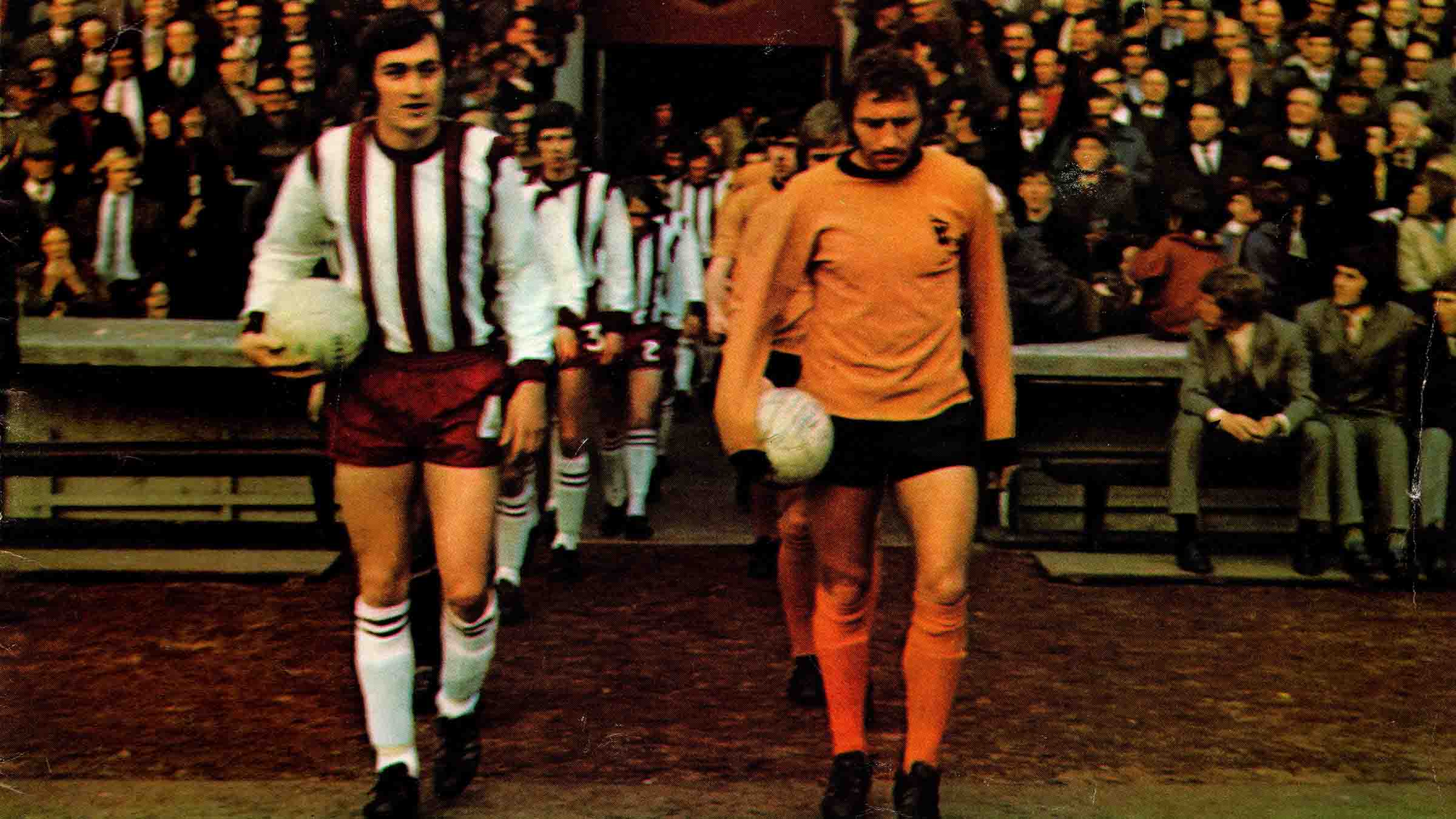 All that remained was the completion of Wolves’ quest for their first piece of silverware for eleven years. The second leg of the Texaco Cup final was played out on the same Monday night (3rd May) as Tottenham were overcome by Arsenal to allow the Gunners to clinch the Division 1 title.

The date is remembered for a particular reason by skipper Mike Bailey as he explained to me a few years ago: “Our second child’s birth was overdue, so the consultant chose to induce the birth on Monday 3rd May.

“I was due to play in the second leg of the Texaco Cup final at Molineux so I asked Mr McCluskey if it could possibly be rearranged for the day before so that I could play. He kindly agreed and our daughter, Victoria, was born. I gave him two tickets for the final in appreciation.”

Although 3-1 down from the first leg, Hearts were rested by having last played nine days earlier against Cowdenbeath. They were also encouraged by the fact that they had overturned a similar deficit against Burnley in round one of the competition at Tynecastle.

Apart from the first ten minutes of a very nervy night, it was all Hearts and a defensive slip allowed George Fleming in for an easy goal on 25 minutes. Perhaps spurred on by interval entertainment from the Band of the 17th / 21st Lancers, Wolves held on for a 3-2 aggregate success.

Although the action was watched by a crowd of 28,462, there was an understandably flat reception for Mike Bailey and his boys as they climbed the steps to the Waterloo Road Director’s Box to receive the trophy and medals from the Managing Director and Chief Executive of Texaco, Carl D Hall.

It must be admitted that silverware won on the back of a home defeat was difficult to get too excited about, summed up by the Express & Star headline, “Wolves’ engine stalls!”

The win was memorable for one fan for a different reason. John Nicholson took up the story in the book written by Steve Gordos and me, ‘Golden Balls’: “An unforgettable evening and one you dream about as a fan, standing in the crowd as your team have just won the cup (Texaco Cup).

Your team’s most charismatic player peels off his shirt and throws it into a mass of chanting supporters and there I was as the shirt fluttered down. I leapt with twenty others and in an instant caught the shirt and in one movement stuffed it up my jumper.

Everyone including my wife was looking around to see who had been the lucky one, but afraid I could lose my prize I said nothing until we arrived back at our car. To the complete amazement of my wife, I pulled out Derek Dougan’s shirt. It is a night that I shall never forget.” At the end of a season that saw Wolves finish fourth in the league, the very next day they set off on a brief end of season tour of Israel and by Thursday they were tackling a national XI that contained nine survivors of their Mexico World Cup team from the previous summer.

Bill McGarry enthused about the fringe benefits of the brief visit to Tel Aviv: “It’s a glorious spot, the hotel is on the beach and the sunshine is beautiful.” In 1971/72 he and his team would have to become accustomed to regular trips across Europe (in the new UEFA Cup), all too often in less temperate climes.