Some of the world’s finest FIFA 21 players are set to compete for the chance to become ePremier League champion as the 2020/21 online finals begin tomorrow.

Wolves will be represented by Tunahan ‘BundledUnsal’ Unsal on PS4 and Sean Flossy on Xbox One in the only tournament to give players based in the United Kingdom the opportunity to compete as their favourite Premier League football club in formal competitive gaming entertainment.

After the 20 clubs hosted thrilling ePL playoffs, 40 competitors have advanced to the online finals, which begin with the Xbox One group stages and quarter-finals from 2pm on Tuesday 23rd March.

The PlayStation 4 group stages and quarter-finals take place on Wednesday 24th March from 2pm, with the eight best players making it through to Friday’s finals day.

They will compete for the coveted ePL trophy, a prize pool of £40,000 and all-important seats in the FIFA 21 Global Series European Playoffs this summer.

The ePL Finals are being hosted from the Gfinity Arena in London, with all gameplay taking place remotely. Fans in the UK can watch on all the usual Wolves channels, Sky Sports, BT Sport, BBC iPlayer and BBC Sport online. Over the last two seasons, the ePL Finals reached more than 22 million fans.

In the aftermath of the ePremier League tournament, Wolves will also be hosting a FIFA 21 PS4 tournament on Tuesday 30th March at 4pm. Please click here to sign up today.

For the latest information, including seedings, groups and fixtures, as well as to watch highlights from the first two ePL seasons, click here.

Premier League commercial director, Will Brass, said: “We are looking forward to the third ePremier League Finals, with some of the highest-ranked FIFA players going head-to-head on behalf of Premier League clubs.

“It’s great to see familiar faces from previous years returning to fight for the title, alongside some new challengers.

“Sadly, we are unable to host the finalists at a venue for the second year running due to Covid-19 but, thanks to EA Sports and our broadcast partners, fans in the UK and around the world will be able to tune in live as the matches take place remotely with expert commentary and analysis from the live studio.

“There will be plenty of thrilling action on the way to finding out who will become this season’s ePremier League Champion, and I look forward to seeing who is going to be the latest star to get their hands on the trophy.”

The 2020/21 ePL online finals will consist of three tournament stages: a double-elimination group stage featuring 20 players per console, a single-elimination playoff bracket with the top eight players per console from the group stage, and the cross-console final which pits the top player from each platform against each other for the ultimate honour of ePL Champion and a £20,000 first prize. 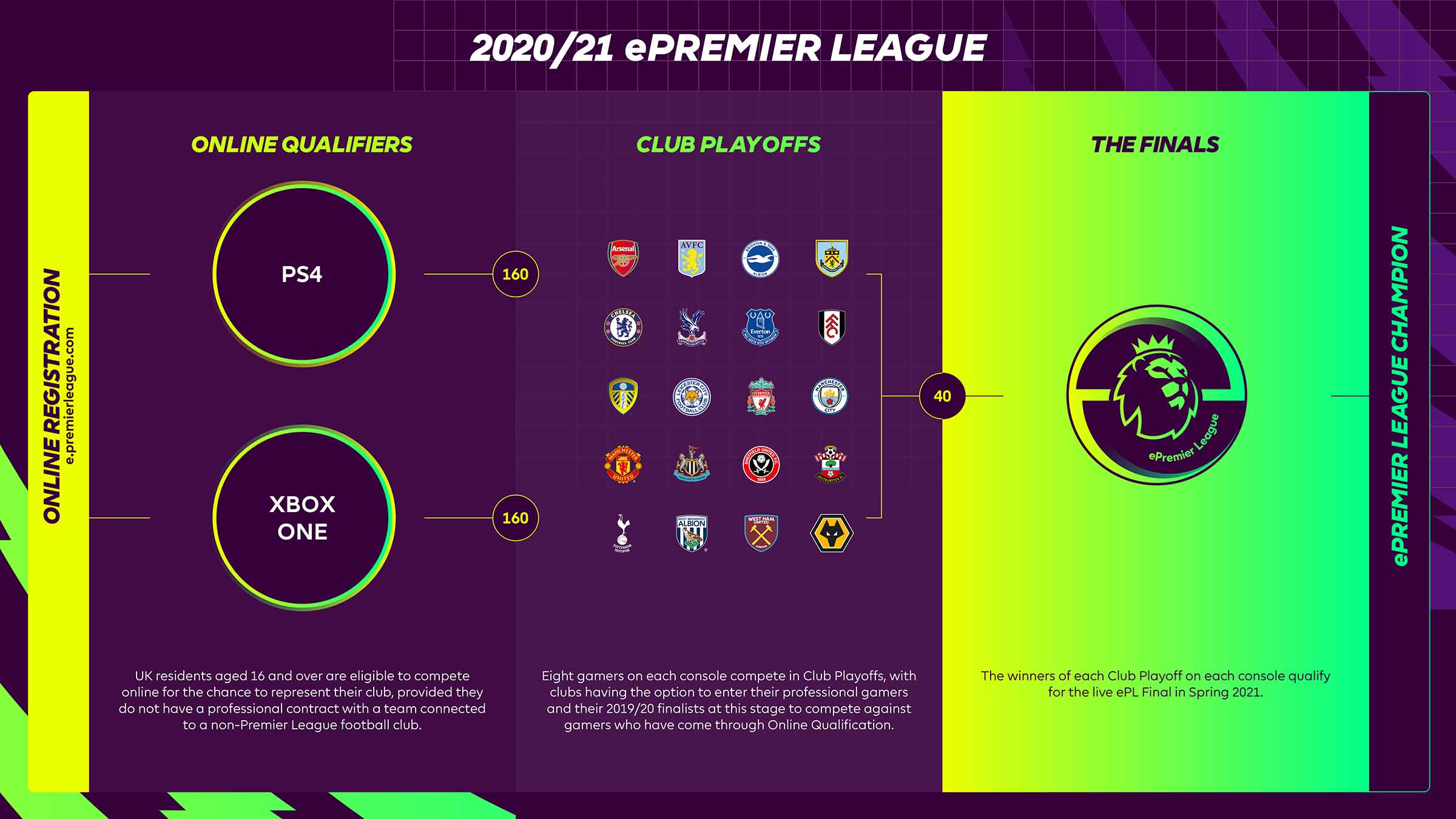 Brent Koning, group director and commissioner at FIFA Competitive Gaming, said: “The Premier League is the most popular football league in the world and the ePremier League featuring the most-played sports game on the planet shows the unrivalled ability of EA Sports FIFA to connect fans to football at scale through esports.

“We believe competitive gaming entertainment is the number-one opportunity for growing the love of sports. The ePL and the involvement of all 20 world-renowned clubs illustrates just how much EA Sports FIFA is integrated into the future of football.”