Wolverhampton is one of the most diverse cities in the United Kingdom.

At the time of the 2011 census, almost a third of the city’s population are from a black or minority ethnic background – compared to just 14 per cent across the rest of England and Wales.

With that in mind, it would only be right for the city’s football club to follow suit, and Wolves has a proud history of celebrating equality and diversity as part of our pack.

Black History Month has taken place throughout October, and wolves.co.uk is looking at the black pioneers who led the way in old gold for others to follow in their footsteps.

Life in Britain in the 1970s was nothing like it is today. The decade has gone down in the history books as Britain’s gloomiest period since the Second World War, set between the ‘Swinging Sixties’ and the divisive eighties.

But the era was also the time where black footballer first came to prominence. With that, came the abuse of players based on the colour of their skin. ‘Monkey chants’ became a disgraceful norm, while bananas were thrown from the stands.

Despite this, thankfully it didn’t stop valiant players of a black and minority ethnic background from facing up to that abuse and giving their all on a football pitch.

Welshman George Berry became a key figure in the Wolves defence during the later stages of the decade, having come onto the scene with a high-profile start on the final home game of the 1976/77 season.

Wolves were at Molineux to face Chelsea on 7th May, and with a 1-1 draw in which ‘King John’ Richards was on the scoresheet, the team secured the Second Division title and promotion back to the top-flight.

Berry went on to make 160 appearances for Wolves, scoring six goals, winning the club’s player of the year award in 1979 and was part of the side which lifted the 1980 League Cup as Wolves beat reigning European champions Nottingham Forest.

Later in the same year Berry first wore the old gold, England under-21 international Bob Hazell made his bow with Wolves back on the big stage of the First Division, as the defender came into the squad for the first time in a December trip to Newcastle United.

Before turning pro, Hazell was part of the Wolves team which reached the 1976 FA Youth Cup final, but in his inaugural season in the first-team, he formed a impressive defensive partnership with John McAlle, to win Wolves’ second ever player of the year title.

Yet it was two years before Berry and Hazell asserted themselves in the hearts of the Molineux faithful when the first black player appeared in a senior competitive game for Wolves, but some supporters may never have even heard his name before.

Jamaican Don Gardner first put on the golden shirt towards the end of the 1974/75 campaign. It is said the 19-year-old attacking midfielder had a trial at Coventry before signing as an apprentice at Molineux. 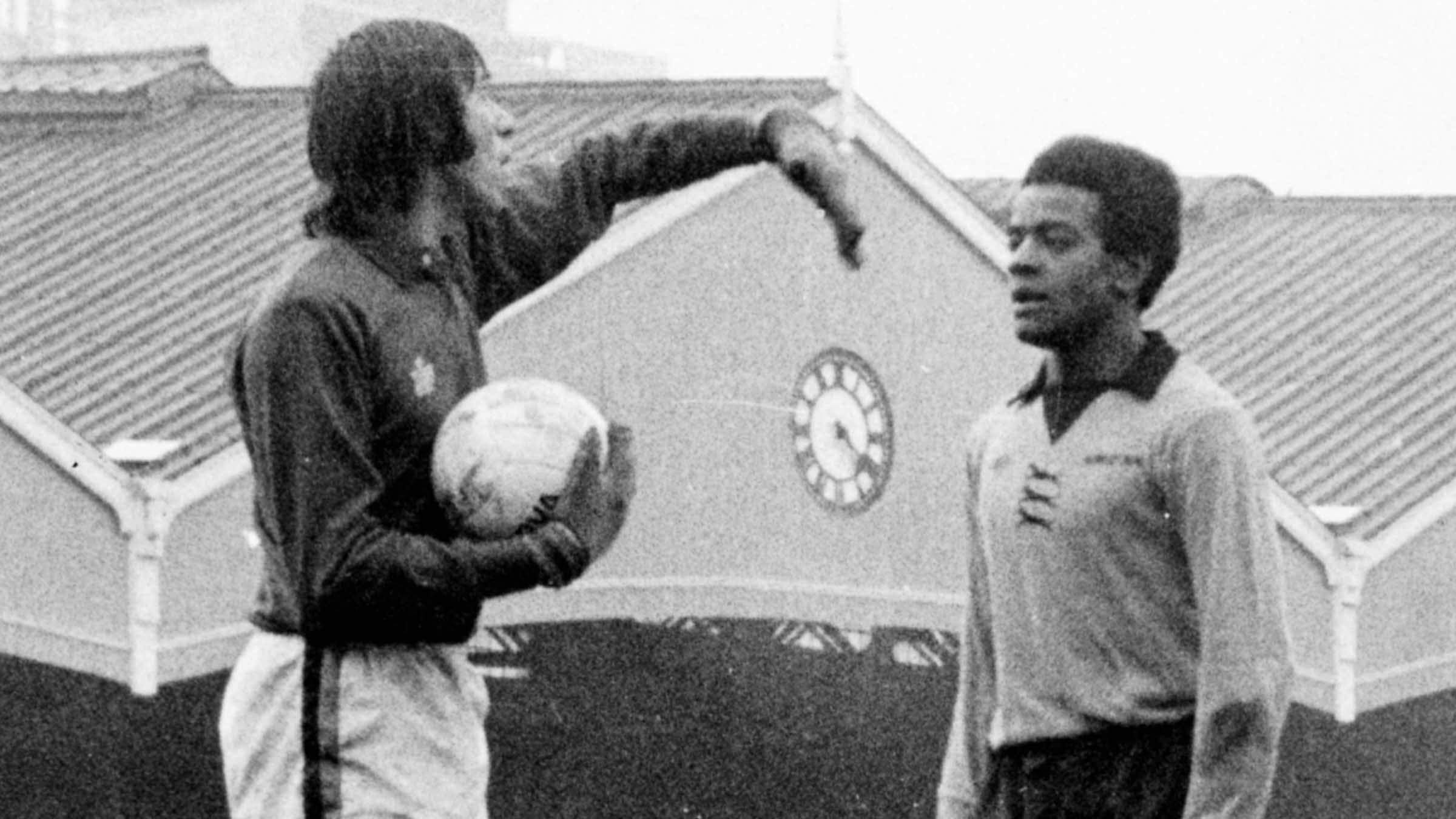 But he was given his first chance on 31st March 1975, when manager Bill McGarry introduced him as a substitute in place of Steve Kindon as Wolves ran out 5-2 winners over Luton Town at Molineux.

Although Wolves found themselves behind at the half-hour mark in the Division One clash, a flurry of goals put them three goals ahead just 30 minutes later.

Having taken his first steps in the top-flight, Gardner was then handed his first ever start just five days later, as Wolves travelled to Queens Park Rangers.

However, there was to be no repeat of their heroics against Luton down in West London, as the hosts claimed a 2-0 victory.

That game was to be Gardner’s only start in his short-lived Wolves career. He also came off the bench the following weekend as Wolves fell to title-winners Derby County, replacing Steve Daley. But with just three appearances to his name to end the season, the club’s first black player was never seen in Wolves colours again.

Although that was the last supporters on these shores saw of Gardner at first-team level, he was part of a successful Portland Timbers line-up in the summer of 1975 alongside his Molineux colleagues Barry Powell, Peter Withe and Chris Dangerfield.

Despite his short-lived career in England, Don Gardner will go down in the club’s history books as the first in a great line of black players to have represented Wolves, leaving a legacy for all future generations to follow.