Wolves have been awarded the 2019/20 Merit Award by Premier Progs for the club’s range of Europa League programmes.

The award is the first of a summer series of Merit Awards, which recognise excellence in programme production for issues that are not eligible for Premier Progs’ main Programme of the Season Award.

Wolves are the proud recipients thanks to the seven Europa League editions produced for the club’s return to European football.

Wolves have marked their return to European competition after a gap of nearly 40 years with a series of outstanding special edition programmes. Each of their seven home fixtures so far in the competition has seen the club produce a 100-page perfect-bound, A4 size issues, costing £5, but fully justifying the cost with issues packed full of content and featuring fantastic artwork.

Given the club’s influential role in helping to generate the idea for European competition back in the 1950s, as well as their seven previous seasons of European football, the programmes have no shortage of material to call on for historical articles. The first of this season’s European issues, for the visit of Crusaders of Northern Ireland contained various such features. One recalled the night in December 1954 when Wolves were labelled ‘Champions of the World’ having defeated Hungarian giants Honved 3-2, in a friendly at Molineux, a year before the advent of the European Cup. A separate article in the Crusaders programme looked at Wolves’ early forays into European competition, with two European Cup campaigns and one Cup Winners Cup run between 1958 and 1961. 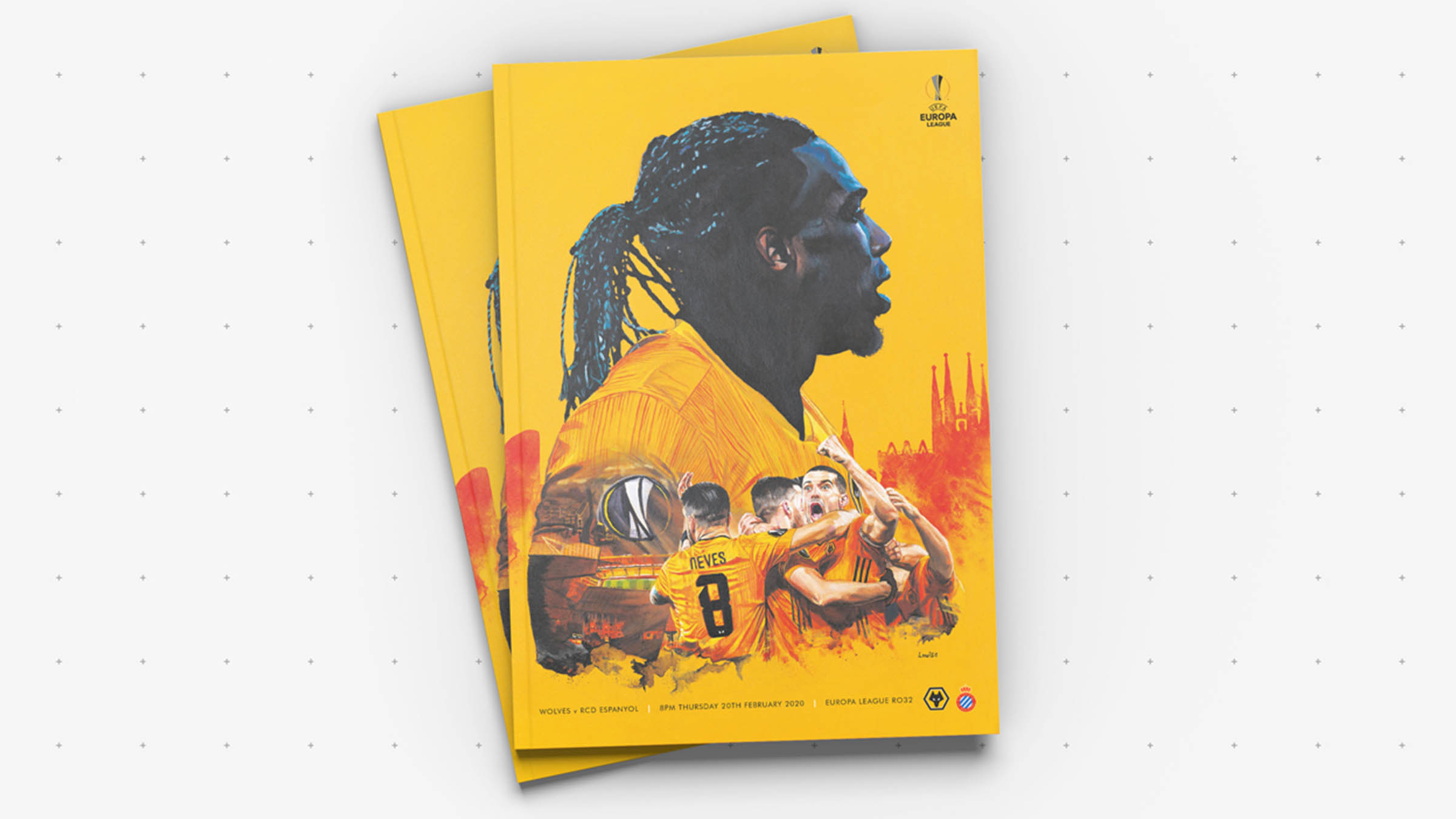 There were also nine pages devoted to the 1971/72 UEFA Cup campaign, when Wolves came close to claiming the trophy, only falling to Tottenham Hotspur in the two-legged final. The feature recalls each game along the way to the final, and profiles those players who took the club to the brink of European success. The subsequent programmes for the qualification and group rounds then looked in more depth at the 1971/72 run, with multiple pages featuring match reports and stats alongside the memories of Wolves supporters. Each of the articles was accompanied by pictures of players and matches from the time, as well as dropping in images of memorabilia such as tickets, programme covers, and newspaper cuttings.

Each issue devoted a generous amount of space to coverage of the opposition, looking not only at the team’s current players, but the area they are from, and the history of the club. These features ranged from information about sights to visit in the Armenian capital of Yerevan, when FC Pyunik were Wolves’ opponents in the third qualifying round, to a moving feature on the Superga air disaster of 1949, in the issue for the visit of Torino in the play-off round. That four-page article looked at the ‘Grande Torino’ team that had won every Serie A title since the end of the Second World War, before losing their lives in a fatal air-crash on the way home from a friendly against Benfica. The Torino programme, probably the pick of these European special issues, also included a profile of the Grande Torino’s manager Erno Egri Erbstein, who has survived the holocaust before leading his team to repeated domestic success.

For the visit of Slovan Bratislava in November, the programme included another impressive historical feature, looking at the successful European Cup Winners Cup campaign of the team from the Slovak capital, in the 1968/69 season. The article offered several pictures from the time, details of Bratislava’s team, and notes on each tie along the way to the trophy. Similarly, the programme for the visit of Espanyol in the last 32 looked at the European pedigree of the Spanish side, recalling their UEFA Cup campaigns of 1987/88 and 2006/07 when they were beaten finalists, losing out on penalties on both occasions. 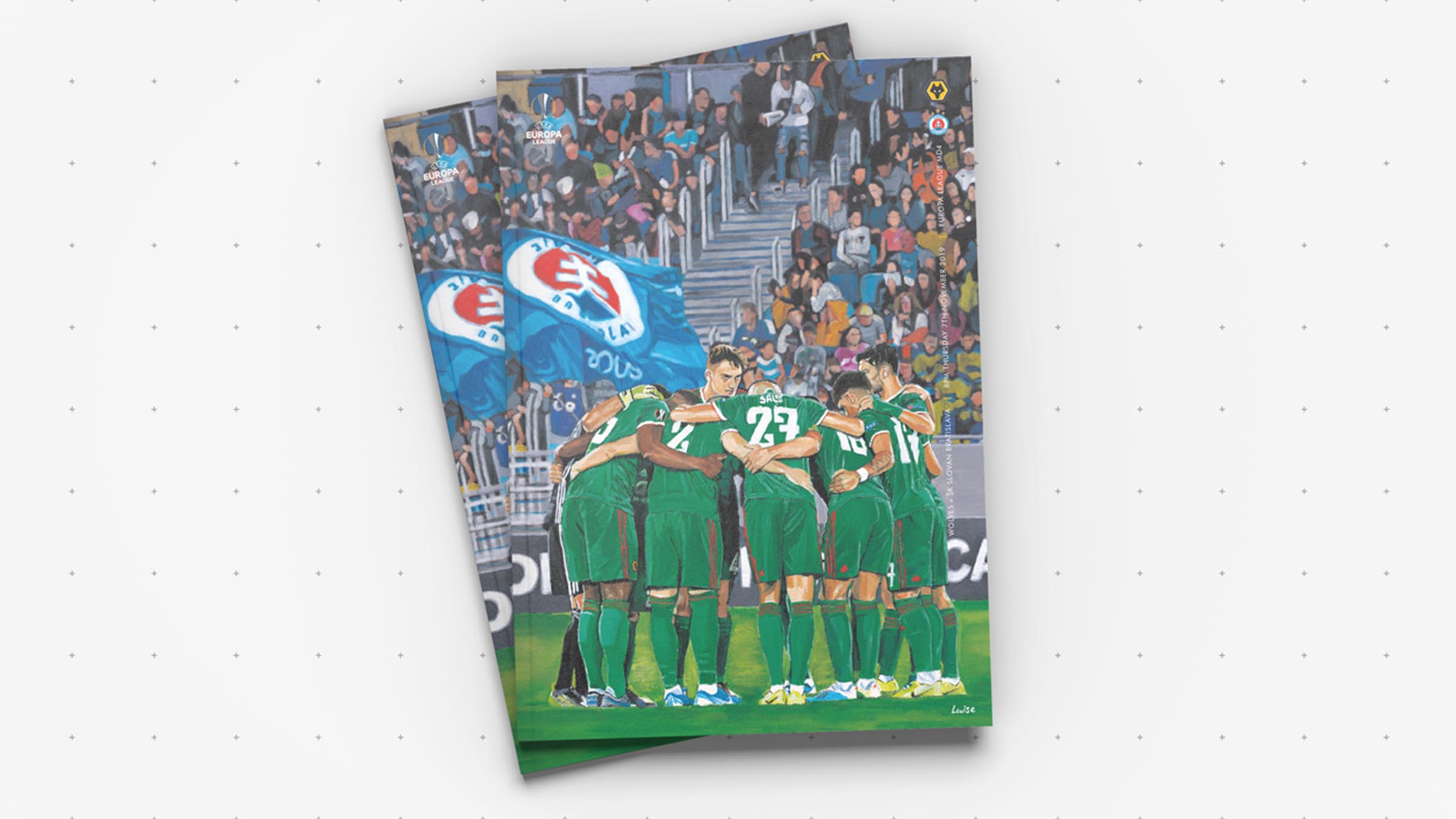 Each of the European issues also shows off the brilliant artwork of Louise Cobbold, whose paintings have been used on the cover of Wolves’ programmes for the last few seasons. Cobbold has produced terrific covers for each programme, with the larger size of these issues ideal in showing off her artwork. The Torino cover is surely the best of the collection so far, depicting a wolf and the bull from the Italian club’s crest, either side of the Europa League trophy. The page size also allows for some excellent double-page photographic spreads, with each issue featuring a ‘European Snapshot’ depicting an image from a match in Wolves’ European history.

With all the usual programme content, such as player features, stats sections, and coverage of Wolves’ other teams, these issues offer fantastic value for money, building up over the season into a valuable record not just of the current European campaign, but of the club’s proud past in continental competition. Wolves’ regular programme finished in fourth place in our Programme of the Season Award, covering issues for Premier League games, but these Europa League issues deserve to be recognised as perhaps the best produced by any club in England this season.

A range of 2019/20 official matchday programme are available at shop.wolves.co.uk now.