Ticket Details Announced For Wolves’ Party In The Park

Wolves and City of Wolverhampton Council can now announce details of how people can get tickets for the club’s ‘Promotion Party in the Park’ which will take place on Bank Holiday Monday – May 7.

It can also be revealed today that local band Project 21 will play a set featuring a guest slot from multi award winning recording artist and Wolverhampton’s very own West End superstar Beverley Knight at the free event in West Park which will celebrate the club’s sensational promotion to the Premier League.

Tickets for the family-friendly party, which are completely free but limited to four per applicant, will be available from 10am tomorrow – Tuesday May 1.

Tickets will be released on a first-come, first-served basis via the following website: www.universe.com/wolvespromotionparty

Bank Holiday Monday will be a day of celebration in the City of Wolverhampton to honour Wolves’ winning the Sky Bet Championship and being promoted to the top flight of English football.

The party in the park will run from 10.30am to 3pm. As well as a performance from Beverley Knight and her band Project 21, Wolves manager Nuno and his squad will show off the Sky Bet Championship Trophy.

Popular former Wolves goalkeeper Matt Murray will host the event as part of the Signal 107 team. There will be other guest appearances throughout the day.

A wide range of food and drink will be available in the park including some of the UK’s premium street food vendors and guest beers. People will not be permitted to bring their own alcohol into the park. There will also be a fun fair. Please note that there will be a search policy in operation.

As well as the party in the park, there will be an open top bus parade through the city centre after Wolves squad and management make their way from a private civic reception to the park.

Supporters will be able to line the route as the buses leave the Art Gallery at midday, travel down Lichfield Street, through Queen Square, down Darlington Street, turning into Waterloo Road, across the Ring Road, turning into Newhampton Road East, Lansdowne Road and along Park Road East.

Due to the very large numbers of people expected in the city, it is necessary for safety reasons to strictly control the number of fans entering the park. Only people with tickets will be able to go into the park and will need to arrive by 11.30am before the bus parade sets off. There will be no admission to the park after this time.

Laurie Dalrymple, managing director of Wolves, said: “The support we have had from the city over the course of this season has been exceptional and we are really looking forward to the opportunity to show our gratitude on Bank Holiday Monday.

“The Sky Bet Championship trophy has been lifted once at Molineux, but the Promotion Party in the Park and open top bus parade will give the rest of the city the chance to see it and celebrate as one.”

Keith Ireland, managing director of City of Wolverhampton Council, said: ““We are delighted to be working with Wolves to help celebrate the club’s outstanding season. Bank Holiday Monday will be party time.

“There is a real feel-good vibe in the City of Wolverhampton right now and a sense that the city is on the up. Having a Premier League football team is a source of enormous pride for the whole city.” 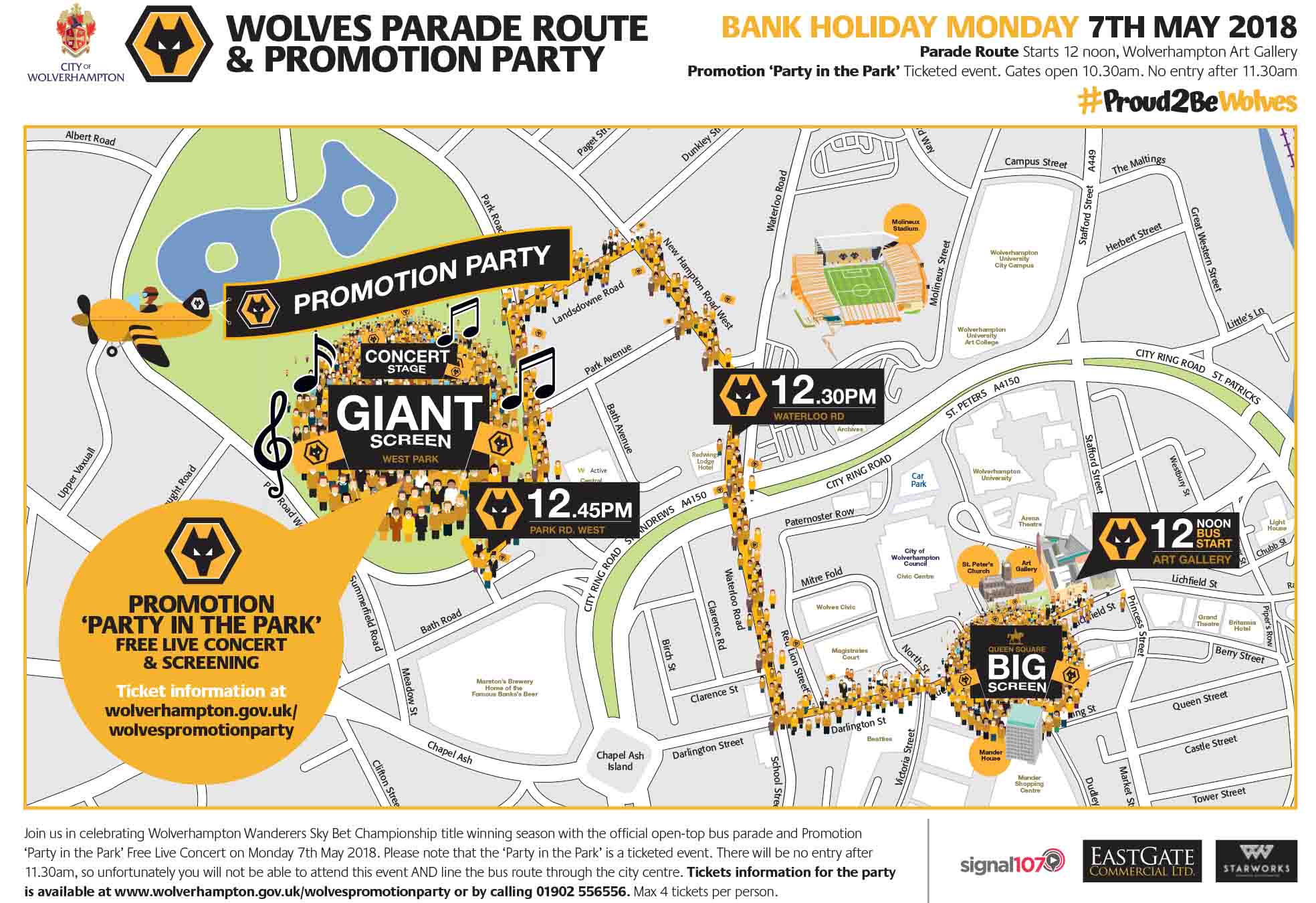