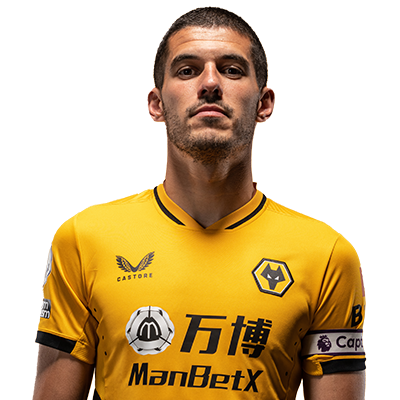 Captain, Conor Coady is a massive influence on and off the pitch at Molineux, where he has spent the previous six seasons.

Previously a midfielder, Coady was transformed into a defender under former head coach Nuno Espirito Santo, who also handed him the captain’s armband.

Previously, Coady joined Liverpool’s Academy as a 12-year-old, and went on to captain the under-21 side and made two senior appearances against Anzhi Makhachkala and Fulham.

While at Anfield, the youngster received international recognition by England all the way up to the under-20s side.

However, a season-long loan at Sheffield United whetted Coady’s appetite for regular football and that’s what he got when signing for Huddersfield on a permanent basis, where him impressed and earned a move to Wolves from 12 months later.

After two years in the Wolves midfield, Coady made the switch to defence in the summer of 2017 and helped Wolves to 24 Championship clean sheets on their way to the league title in 2017/18.

During 2020/21 Coady surpassed 100 Premier League games, made his England debut and represented his country at Euro 2020, before returning to Molineux ahead of the new season.